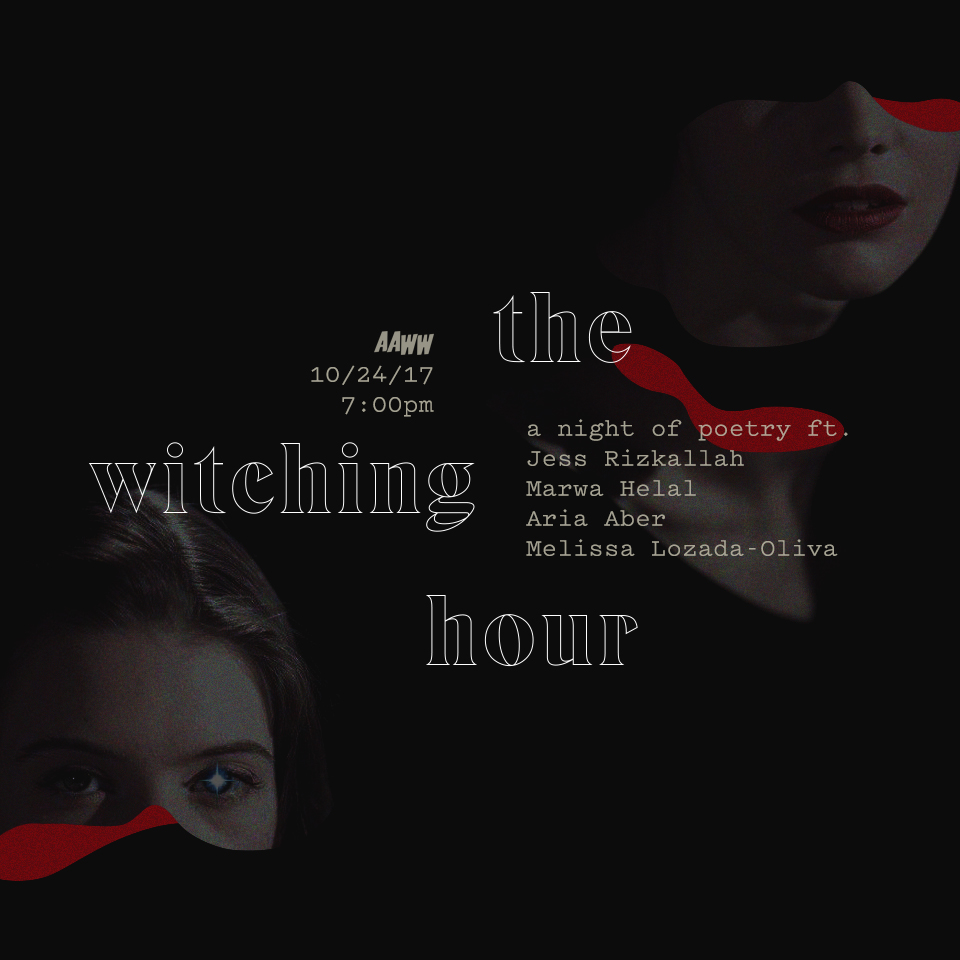 If you’re in the Halloween spirit for some bewitching poetry, come celebrate the launch of Jess Rizkallah’s new book of poems, the magic my body becomes. She will be joined by poets Marwa Helal, Aria Aber, and Melissa Lozada-Oliva, all of whom write into different sorts of magics: the body, family, immigration, language, community, love, and loss. In the magic my body becomes, Jess Rizkallah explores the complexities of being too Arab for America and too American for her Lebanese elders weaving in family history, civil war and trauma, religion, and memories of Lebanon. In a forceful yet tender reclaiming of the body, she speaks out against the sexualisation and shame to which women are subjected, from both sides of her identity.

Winner of the 2017 Etel Adnan Poetry Prize, Jess Rizkallah seeks a vernacular for the inescapable middle ground of being Arab American in her debut poetry collection, the magic my body becomes (University of Arkansas Press, 2017). Safia Elhillo writes, “I cannot stress enough how important it feels, as children of parents whose worlds had to end so ours could begin, to have poets like Jess giving voice to the doubled identities we carry.” Rizkallah is a Lebanese-American writer and illustrator living between Boston and New York City. A recent graduate from Lesley University with a BA in English, Creative Writing, and Illustration and currently pursuing an MFA in poetry at New York University, as well as founder and editor at Pizza Pi Press and Maps for Teeth. Check out her poem, “where are we headed” in The Margins.

Marwa Helal is a poet and journalist. Her work appears in Apogee, Hyperallergic, the Offing, Poets & Writers, the Recluse, Winter Tangerine and elsewhere. She is the author of I AM MADE TO LEAVE I AM MADE TO RETURN (No, Dear/Small Anchor Press, 2017) and Invasive species (Nightboat Books, 2019). Helal is the winner of BOMB Magazine’s Biennial 2016 Poetry Contest and has been awarded fellowships from Poets House, Brooklyn Poets, and Cave Canem. Born in Al Mansurah, Egypt, Helal currently lives and teaches in Brooklyn, New York. She received her MFA in creative nonfiction from The New School and her BA in journalism and international studies from Ohio Wesleyan University. Watch Marwa read “An Ode to DJ Khaled” on AAWW TV.

Aria Aber was born to Afghan parents in Munster, Germany. After finishing school, she relocated to London, where she studied English Literature at Goldsmiths College, University of London and currently lives in New York City to pursue her MFA in poetry as a Writers in Public Schools fellow at NYU. Her work has appeared or is forthcoming from The Poetry Review, Best British Poetry 2015, Muzzle Magazine, Prelude, Lighthouse, Reservoir, decomP, and many others. She has been awarded the New Writing Prize in Poetry from Wasafiri, as well as fellowships from Kundiman and Dickinson House. Check out Aria’s poem, “Azalea Azalea,” in The Margins.

Melissa Lozada-Oliva is a spoken word poet & educator living in Boston whose fierceness and charm have made her a near-instant slam poetry phenomenon. She is a current National Poetry Slam Champion, a Brenda Moosey Video Slam Champion, and the author of the chapbook Plastic Pájaros. Her poem “Like Totally Whatever” scored the highest at the National Poetry Slam finals, propelling her team to victory and herself into the national spotlight, appearing on Upworthy, Huffington Post, Buzzfeed, and countless other media outlets. Melissa’s ability to speak truth to power as an unapologetically feminist Latina comes as a breath of fresh air to audiences perhaps expecting the “same old slam poetry”. Blending power, warmth, and flat-out hilarity, Melissa leaves audiences not only excited about changing the world, but excited about being a part of that change. Watch Melissa perform “Like Totally Whatever” at the National Poetry Slam here.

The Witching Hour: A Night of Poetry