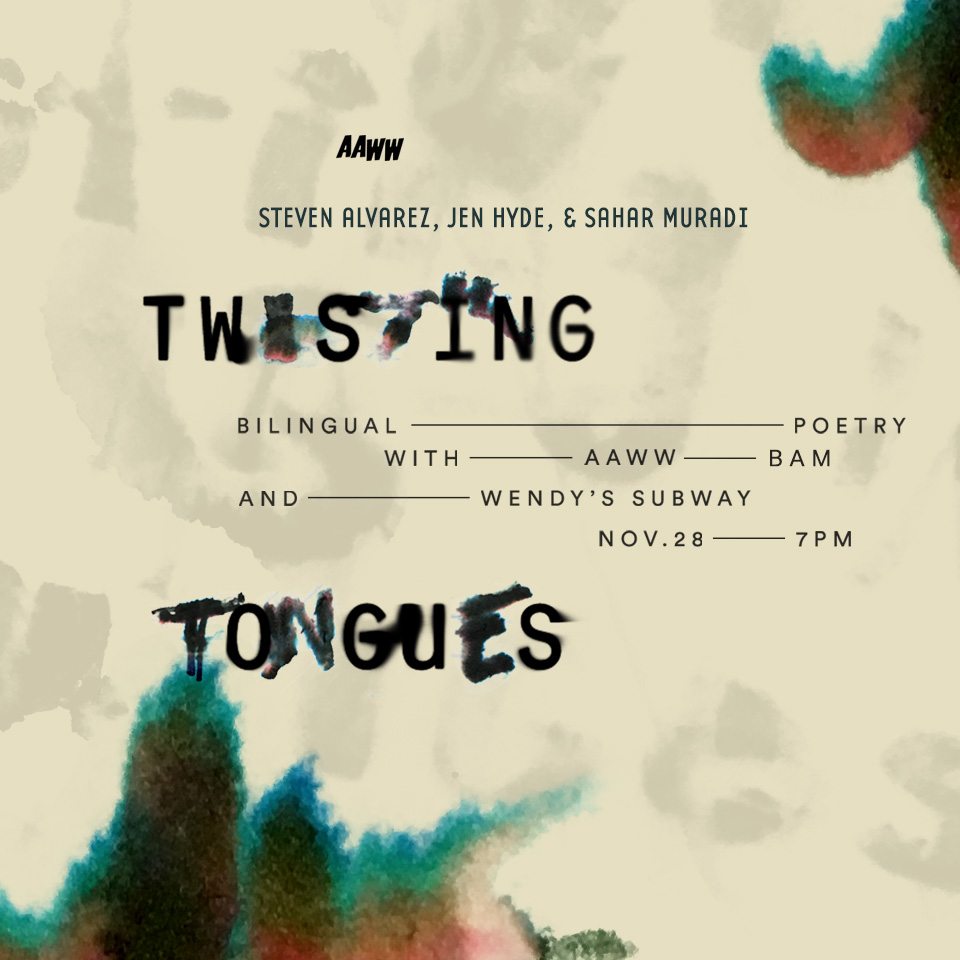 Note: This program is co-sponsored by AAWW, but the reading is taking place at BAM.

Writing in Dari, Spanish, Nahuatl, Chinese, and English, the poets of Twisting Tongues see translation as a way to interrogate the relationship between English and histories of migration and diaspora. Come see poets Jen Hyde, Steven Alvarez, and Sahar Muradi read their innovative multilingual poetry that embraces errant, in-between, generative translation at our special event in partnership with BAM and Wendy’s Subway.

RSVP HERE
OPEN TO THE PUBLIC

Steven Alvarez is the author of The Codex Mojaodicus, winner of the 2016 Fence Modern Poets Prize. The Codex Mojaodicus is a work of “Neo-Baroque Xianco experimentalism” written in English, Spanish, and Nahautl that moves through the colonization of the Americas to twenty-first century borderlands. He has also authored the novels in verse The Pocho Codex (2011) and The Xicano Genome (2013), both published by Editorial Paroxismo, and the chapbooks, Tonalamatl, El Segundo’s Dream Notes (2017, Letter [r] Press), Un/documented, Kentucky (2016, winner of the Rusty Toque Chapbook Prize), and Six Poems from the Codex Mojaodicus (2014, winner of the Seven Kitchens Press Rane Arroyo Poetry Prize). Born and raised in southern Arizona, he currently lives in New York where he is the Assistant Professor of English at St. John’s University.

Jen Hyde’s debut collection Hua Shi Hua, ??? [Drawings & Poems from China] (Ahsahta Press, 2017) uses the image of the yellow crane to interpose English translations of classical Chinese poetry with her experience of the contemporary Shanghai skyline. She writes, “When I finished the performance, I realized that perhaps I am not so much an illiterate writer, but one who is unable to understand both my first language and the language of my heritage, and that this is an identity that requires lifelong mining.” Kimiko Hahn hailed the collection, “[A] lyrical quest for heritage, for language, and for poetry itself.” Jen lives in Brooklyn, where she is Heart Valve Ambassador for The American Heart Association, the Assistant Poetry Editor of the Bellevue Literary Review, and a collaborative chapbook publisher for No Dear/Small Anchor. Read her poems in AAWW’s The Margins.

Afghan American poet Sahar Muradi’s first chapbook, [G A T E S] (Black Lawrence Press) examines intimacy, time, and the unknown. Rajiv Mohabir says that “Muradi makes sense of the fragments of memory, the broken buildings of Kabul, Mazar, and Panjsher, the innocence of childhood punctured by journey, a father’s illness, losing a language, and the politics of a war uninvited.” Sahar is a writer, performer, and educator born in Afghanistan and raised in the U.S. She is the co-editor of One Story, Thirty Stories: An Anthology of Contemporary Afghan American Literature (University of Arkansas Press, 2010) and co-founder of the Afghan American Artists and Writers Association. Check out Sahar’s lyrical conversation with Zohra Saed in Open City.

Please note that this is an offsite event, held at Wendy’s Subway reading room in the lower level of BAM’s Fisher Building.