When the Unreal’s Real: On World Literature
Xu Xi and Bino Realuyo 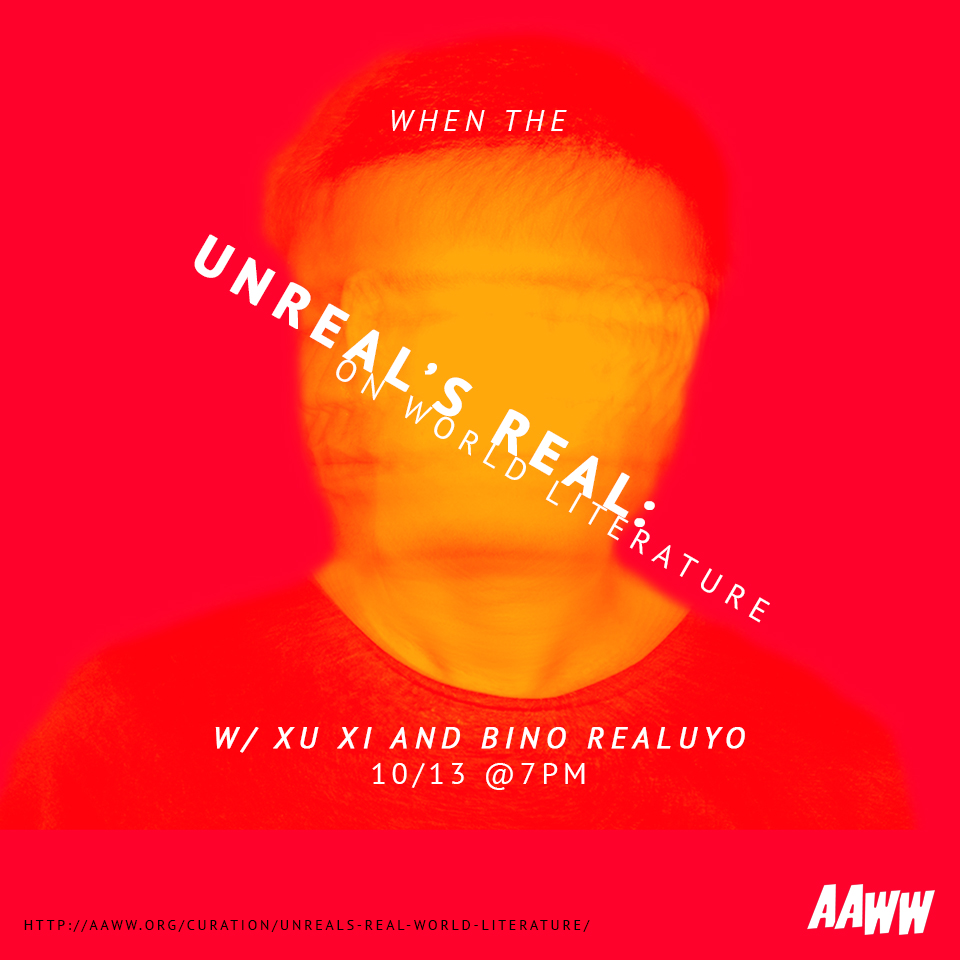 Join Xu Xi and Bino Realuyo to talk about Xu’s newly released novel That Man In Our Lives (C&R Press 2016). Bino and Xu will perform the book’s prelude in a conversation on the transnational novel, metafiction, jazz and Bugs Bunny. Narrator, character, and oh yeah, real people themselves shapeshift in a conversation about the fate of the novel in the era of globalization and China’s ascendance. Shortlisted for the 2007 inaugural Man Asia Booker Prize for her book Habit of a Foreign Sky, Xu Xi will discuss the book with AAWW co-founder and Philippine National Book Award winner Bino Realuyo. (The book actually opens with a scene at AAWW!)

Xu Xi’s new novel That Man In Our Lives focuses on the lifelong friendships between Gordon (Gordie) Ashberry, a wealthy, dilettante Sinologist and his two closest friends Harold Haight and Larry Woo, a character in three of Xu’s earlier novels. The story opens in March 2003 when Gordie deliberately disappears during a flight delay in Tokyo. A large cast of characters traverses the globe in search of this missing protagonist, a Gatsby-ish figure with Chinese characteristics. The novel is both a metafictional response to Cao Xueqin’s classic novel Dreams of Red Chambers and originally inspired by John Adams’s opera Nixon in China. As Pulitzer Prize-winning novelist Adam Johnson says, ”With That Man in Our Lives, Xu Xi deepens her explorations of absence, alternate realities, and the elusiveness of identity in our increasingly fragmented world. When Gordon Ashberry vanishes one night at Narita Airport, a global mystery ensues, one in which every avenue of inquiry teasingly leads to a cascade of connections, insights and fractured possibilities. With heart and wisdom, That Man in Our Lives is ultimately an intense examination of the very nature of storytelling.”

XU XI (???) is author of eleven books, including the novel That Man In Our Lives (C&R Press, September 2016) and Interruptions (Hong Kong University Museum & Art Gallery, September 2016), an ekphrastic essay collection with photography by David Clarke. She won an O. Henry Prize Story award and was shortlisted for the inaugural MAN Asian Literary Award. She is co-founder, with Robin Hemley, of Authors at Large, which offers international writing retreats and workshops. he New York Times once named her a “pioneer writer from Asia in English.” A Chinese-Indonesian Hong Kong native and U.S. citizen, she currently lives between New York and Hong Kong. Read an interview with her in AAWW’s The Margins and follow her @xuxiwriter.

Born and raised in Manila Philippines, Bino Realuyo is the son of a survivor of the Death March and Japanese concentration camp in the Philippines during World War II. Realuyo is also an educator in under-served communities and author of the award-winning books, The Umbrella Country and The Gods We Worship Live Next Door. His poetry and fiction have appeared in numerous literary journals and magazines including The Nation, The Literary Review, and The Kenyon Review. He was a co-founder of the Asian American Writers’ Workshop and blogs about Filipino American issues for the Huffington Post. According to The New York Times Book Review, “Realuyo’s lucid prose, unencumbered by sentimentality or hindsight, lends freshness to the conflicts of his somewhat familiar characters and color to a setting both impoverished and alluring.”

When the Unreal’s Real: On World Literature