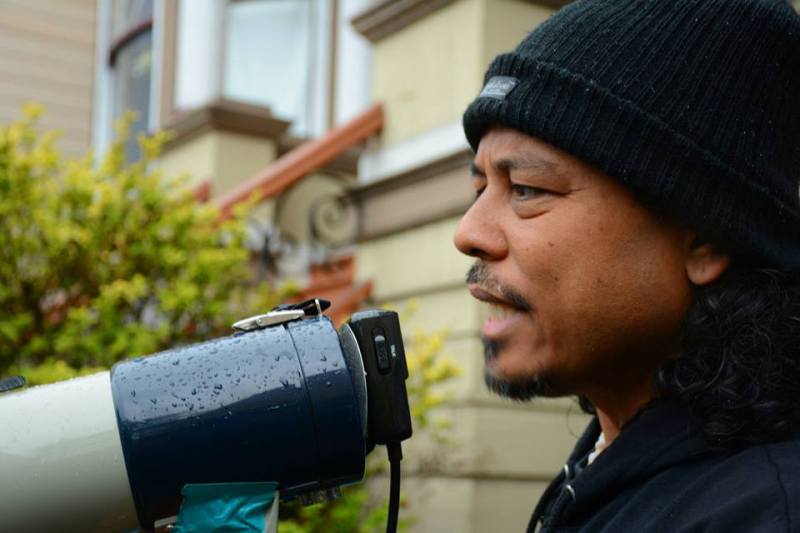 Join us for a reading with visiting poet Tony Robles, a Fil-Am San Francisco based writer and activist whose book Fingerprints of a Hungerstrike documents the story of the Frisco Five – the hunger strikers who in 2016 protested police killings in the city, and the dream of remaking his hometown into a haven for immigrants, elders, and the multiracial working-class. He’ll be joined by bona fide Filipina-American legend Jessica Hagedorn, who will read from The Gangster of Love, her punk pinay coming-of-age novel that depicts the art/punk scene of San Francisco in the ‘70s and was recently adapted to the stage. Featuring a special presentation from Tomie Arai of the Chinatown Art Brigade.

Tomie Arai is a public artist who collaborates with writers, architects, historians, curators, and local communities to create work that explores the rich cultural diversity of the Americas. She is a founding collective member of the Chinatown Art Brigade, a cultural collective that recognizes the power of art to advance social justice and works to fight housing displacement in Chinatown with local grassroots organizers. She has designed permanent public works of art for the NYC PerCent for Art Program, The San Francisco Arts Commission, the MTA Arts for Transit Program, the NYC Board of Education and the US General Services Administration Art in Architecture Program. Her latest public commission will be an architectural glass mural for the new Central Subway Station in San Francisco Chinatown, sponsored by the SF MTA.

Inspired by the Frisco Five hunger strikers in 2016, Tony Robles’s Fingerprints of a Hungerstrike (Ithuriel’s Spear, 2017) vividly captures the fight of black and brown communities against a rapidly gentrifying San Francisco. Kim Shuck writes, “Tony speaks of the city as a relative with a life threatening illness with love and anger.” Born and raised in San Francisco, Tony is the author of Cool Don’t Live Here No More – A Letter to San Francisco (Ithuriel’s Spear, 2015) as well as two children’s books, Lakas and the Manilatown Fish and Lakas and the Makibaka Hotel. In 2010 he was nominated for the Pushcart Prize by Mythium Literary Journal for his short story, “In My Country.” He is co-editor and a revolutionary worker scholar of Poor magazine, and currently lives in San Francisco, where he works as a housing rights advocate and board member of the Manilatown Heritage Foundation.

Novelist, playwright, poet, former punk band leader, Jessica Hagedorn is the recipient of the Workshop’s 2011 Lifetime Achievement Award. Her 1996 classic of Asian American literature, Gangster of Love, is part road novel, part immigrant family drama, and all rock ‘n’ roll, and features a character inspired by the poet Al Robles, Tony Robles’s uncle. “Gangster of Love” recently debuted on stage at the Magic Theatre in San Francisco. She is the author of several books, including Dogeaters, a National Book Award nominated classic of Asian American literature, Dream Jungle, and the novel Toxicology (Viking 2011), a Publishers Weekly Pick of the Week. Hagedorn is also the author of Danger And Beauty, a collection of poetry and prose, and the editor of three anthologies: Manila Noir, Charlie Chan Is Dead: An Anthology of Contemporary Asian American Fiction and Charlie Chan Is Dead 2: At Home In The World. She is the recipient of a Lucille Lortel Playwrights Fellowship, a Guggenheim Fiction Fellowship, and an NEA-TCG Playwriting Residency Fellowship, as well as fellowships from the Sundance Theatre Lab and the Sundance Screenwriters Lab. Hagedorn has taught in the MFA Playwriting Program at Yale, and in the MFA Creative Writing Program and LIU Brooklyn, NYU, and Columbia University.