The author of The Magical Language of Others, a heart-wrenching story of parent-child separation, speaks to the linguistic, historical, emotional surprises in writing her memoir. 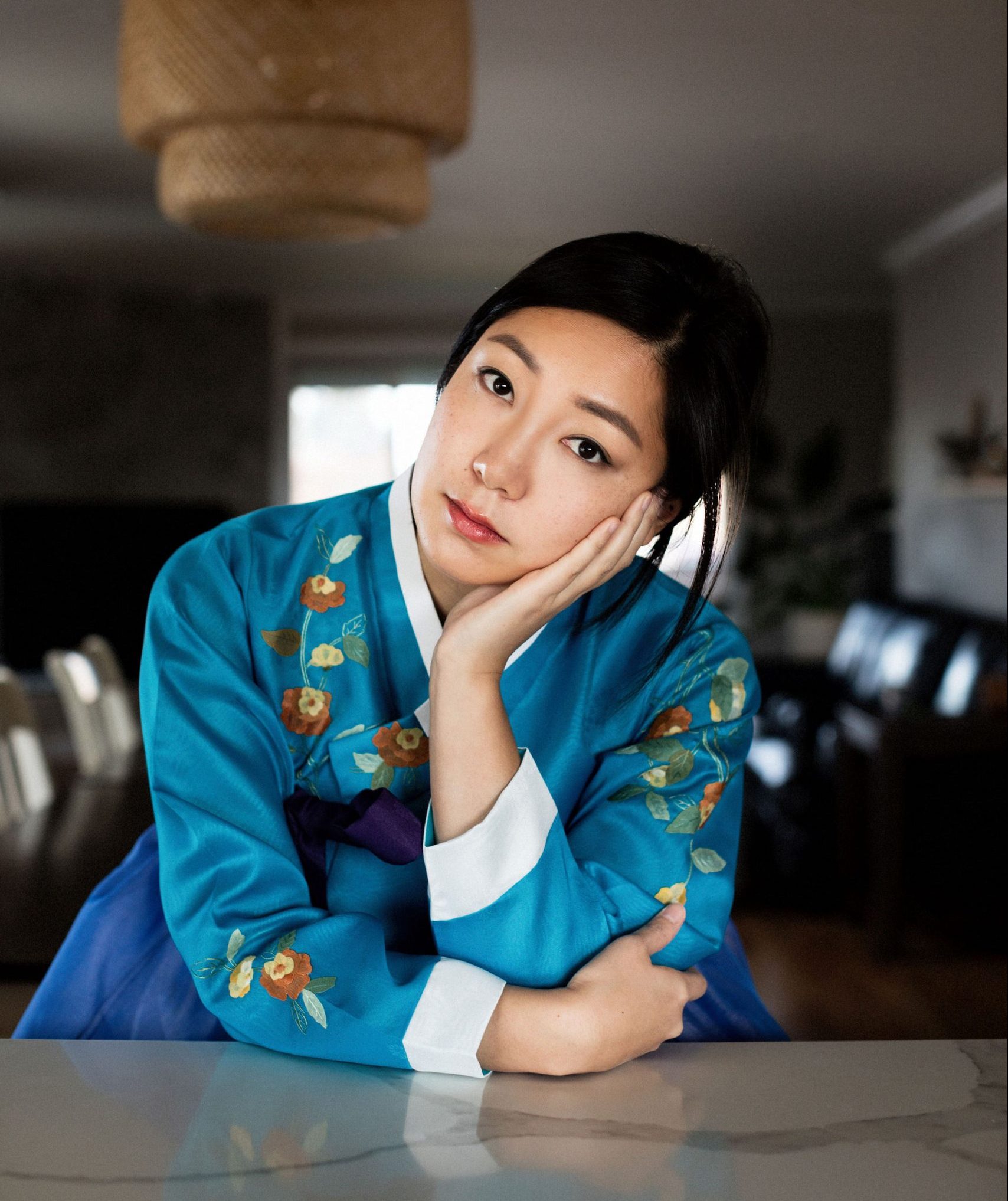 JENNY JIMENEZ
E.J. Koh, the author of The Magical Language of Others. Photo by Jenny Jimenez
Essays, Interviews
March 4, 2020

While speaking with E. J. Koh about her luminous new memoir, The Magical Language of Others, there was a point in our conversation where she was searching for the words to describe the joy of discovering a hidden surprise in an artistic work.

It’s this feeling of having the memory of a word or phrase on the tip of your tongue, that is so familiar when you are the child of immigrants, as Koh and I are. When you live between cultures, between languages, there’s this constant sensation of rifling through the disorganized filing cabinet of your mind, where lingering sounds and their meanings get shuffled together.

Koh, a trilingual literary translator, poet and now memoirist, is able to distill that sense of wordplay and the bending of language into something exquisite with The Magical Language of Others, her heart-wrenching story of parent-child separation.

When Koh was 15 years old, her parents moved back to South Korea from California, following a job offer so lucrative her father couldn’t turn it down. The author and her older brother remained stateside to raise themselves. While Koh and her parents lived apart her mother stayed in touch by sending letters handwritten in Korean.

I’m tempted to call these letters—scanned into the book in their original Hangeul—the heart of Koh’s memoir. But as Koh translates their contents into English and then fills in the details of her adolescence, the letters serve more as a lifeline for the author as she reopens emotional wounds that had never quite healed. In doing so, Koh deepens her understanding of love, its complications, and its expression in different languages.

The Easter egg that she referenced in our conversation came from a reader, who identified a passage in which Koh’s mother transliterates Japanese into Korean text, which Koh then translates into English, a moment that captures the author’s close study and mastery of these overlapping languages.

My own experience of reading Koh’s book and interviewing her about craft felt like cracking through a series of beautiful, nested Easter eggs, with each layer of shell giving way to reveal yet another surprise inside—from the linguistic to the historical to the emotional.

It was meant to be a suggestion, she added, a way to become a better poet. “I didn’t expect that following translation would lead me to my mother’s letters.”

When Koh originally received her mother’s letters, which date back to Koh’s teenage years, her Korean was on the shaky footing that I recognize from my own youth: “I read the letter out loud to hear the sounds. Otherwise, I could not recognize the words and their shapes, filling the page, covering the creases,” she writes.

It is nearly a decade later, after Koh has earned her graduate degrees in poetry and literary translation, that she rediscovered these letters and was finally able to understand them in a more complete way.

“I don’t think I really came into being a translator until I translated my mother’s letters,” Koh said. Through that process, she realized that the end goal of translation was not simply to take command of a language. “When it was personal, when more was at stake, that is when I felt like a translator. I was trying to speak in my mother’s voice. I was trying to become my mother.”

From letter to letter, even from line to line, her mother’s tone varies widely. At times, she’s cheerful, slipping in doodles like a lamb or a rainbow, or grounded in wisdom (“When you’re having a hard time, tell somebody”). Other times, she is shockingly forthright in expressing her sorrow and regret for leaving her children: “Until the last of my life, Mommy’s heart will ache. … Mommy’s committed a grave (sin) against Eun Ji!”

Koh uses italics and parentheses here to note her mother’s use of English words in otherwise all-Hangeul letters, and it’s evidence of the care that her mother took in penning these letters by looking up the English definitions of more complicated Korean vocabulary to ensure her daughter’s comprehension. Knowing her daughter’s linguistic limitations, Koh’s mother limits herself to “kiddie diction,” as Koh calls it in her translator’s note, and makes an intentional choice to use third person at times, referring to herself as “Mommy” and to the author as “Eun Ji,” Koh’s Korean given name that’s reserved for intimate family.

I recognize these as acts of love and mothering, on the page, and they are equal parts delightful and devastating to me as a Korean American reader who can identify with so much of Koh’s story. By committing this intensely personal experience to the page, Koh is effectively ending the isolation of her unmoored youth, inviting readers to consider how their stories interlock with hers. She is far from alone: There are now terminologies and cultural references that put a name to what Koh and many other Asian and Asian Americans have lived through (“parachute children,” “goose fathers,” “Better Luck Tomorrow,” to list a few).

Koh, who is now studying intergenerational trauma for her Ph.D., goes one step further within her memoir to pry open the histories of estrangement and family separation within her mother’s and her grandmothers’ lives. “I understood that I had to sail the deep waters to give the story that,” she told me, describing the process as “the waters bridging together.” It’s a fitting metaphor for a family history that spans mainland Korea, Jeju Island, and Japan, all maritime locations connected by colonization, violence, and oppression.

As a fellow Korean American who has also learned Japanese, it occurred to me to ask Koh about the ways that classical Chinese characters in both languages (called hanja and kanji, respectively, in Korean and Japanese) deepen her ability to carry the depth and meaning of words in translation.

“Learning Japanese expanded my ability in the Korean, the languages having political history and relationships between them,” Koh said. “The ability to read hanja through kanji is sort of the ability to look into the past.” She added that in her life, she really only sees hanja used in names, carved into family members’ gravestones, or printed onto official documents in Korea.

“The name is a thread, a continuous thread,” she said, explaining how her family follows the Korean tradition of repeating one syllable in each member’s name—in their case, “eun” for every female (Eun Ji, Eun Mi, Eun Kyung, and so on) and “hyun” for every male.

“The hanja in my name is so directly correlated with being a part of the whole. It’s so closely tied to being a family, [to] my whole line, going back to my ancestors.”

“I didn’t know what to call myself,” she said, explaining that she had gone by “Angela,” her Catholic name, through college and graduate school, then published first as “Angela Eun Ji Koh.” Grappling with her name became an obsession.

“I didn’t know what belonged to each name. ‘Angela’ feels very public and outward-facing,” she said. “‘Eun Ji’ is more hidden away, more serious. ‘E. J.’ has almost become a self-portrait more than a name. It’s the closest representation of who I am.”

All of this careful consideration of translating the self and one’s history has made her uncannily qualified for a different kind of adaptation: Helping to interpret Min Jin Lee’s bestselling novel Pachinko for the TV screen.

“I was brought into the writers’ room because of my research background [on intergenerational trauma], but also my family history,” said Koh, whose ancestors were part of the Korean diaspora to Japan that Lee depicts in her multigenerational epic. Coincidentally, a major character, Koh Hansu, even shares her surname.

“It’s not lost on me how lucky I am to be a part of that writer’s room,” she said, but to me, it seemed like a natural fit for her talents. “It’s the combination of the visuals of dance, of sound from translation, the sensitivity of emotion from poetry.”

She is also, I pointed out to her, part of the new literary tradition of powerful women storytellers—including Lee, Han Kang, and Crystal Hana Kim—rewriting the history of Korea that has, for so long in the English language, been dominated by men.

“Your book is instruction,” I said, telling her briefly about my own research into my father’s hometown of Gwangju, South Korea, which, like Jeju, is a politically and geographically marginalized part of our ancestral country. “It opens this door. It’s a way forward for me.”

Ever generous, Koh replied by showing, yet again, the magnanimity that is central to her art. “I feel like your story and my story, they collide and intersect in such a way,” she said, as if allowing yet another interlocking piece fall into place.

Hannah Bae is a Korean American writer, freelance journalist and illustrator living in Brooklyn, NY. She was an Open City Fellow in 2018-19. She is the 2020 nonfiction winner of the Rona Jaffe Foundation Writers’ Award, which is supporting her memoir-in-progress about family estrangement, mental illness, childhood trauma, and cultural identity. Her work has appeared in publications including The Washington Post, The San Francisco Chronicle, Catapult, and Bitch Media. She is the recipient of recent residencies, fellowships and teaching opportunities from Ragdale, the Peter Bullough Foundation, Kundiman and the Indiana University Writers’ Conference. She has worked full-time for organizations including CNN, Newsday and the U.S. State Department.