The evolutionary resilience of fruit comes by virtue of landing far, far away from home. Send us your best nonfiction on ‘fruit’ 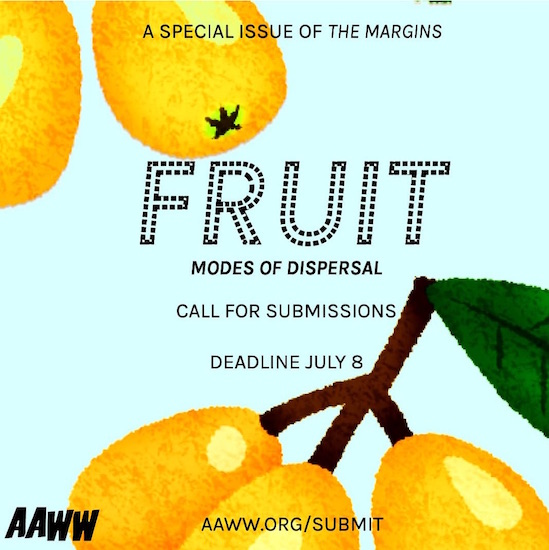 One of the first connections I felt to my Chinese heritage took the form of a loquat tree that my grandparents planted from a sprout in their first and only home in the Bay Area. By the time I was born, the loquat tree had grown huge and bore sweet globes of flax-colored fruit with shiny, buttock-shaped seeds inside. I ate loquats at my grandma’s house every weekend of my childhood, until my grandparents grew too old to prune it and the tree rotted from the inside out. Only then did I realize loquats were hard to find in America, and now I search for these rare yellow ornaments everywhere: in Chinatowns, artisanal fruit stores, even (wistfully) in Whole Foods. For years, my grandma did not know where to buy them until they popped up at a local Chinese grocery, nestled between longans and kumquats.

Fruit are responsible for their own propagation around the world. Their existential endgame is to be dispersed, in any number of survival strategies. Fruits that want to be eaten (and subsequently defecated) develop sweet, juice-filled flesh. Fruits that want to snag onto feathers or fur curl their skin into hooks and spikes. Fruits that want to be windswept develop tiny parachutes to carry their seeds away. Fruits that want to be carried by waves do everything they can to float. This is how fruits ensure the future of their own kind. Their evolutionary resilience comes by virtue of landing far, far away from home. In this way, fruit are diasporic. They can be relentlessly available continents away from their ancestral grounds. Or, in my grandma’s case, they can be a reminder of home that is almost impossible to find in regular supermarkets.

For a new series on The Margins, we’re looking for nonfiction in a variety of forms by Asian diasporic writers on the topic of fruit. The fruit you write about could be popularly mistaken for a vegetable (eggplant), remind you of home (loquat), have caused worldwide pandemics (opium poppy) or a political stir (avocado), or be a magazine (FRUiTS). The approach you take could be an origin story, an encounter, a recipe, a comic, an investigation, a response to current events, an on-the-ground report, satire, or something else entirely. The only restriction is that the stories must be true. We’re particularly interested in soliciting work from emerging writers and LGBTQ+ voices—how could we not explore fruit as a slur!

Please format the title of your submission as follows: “LAST NAME – Fruit – TITLE OF PIECE.” Be sure to include a short biography (maximum 60 words) in your cover letter. Please double-space all prose submissions and limit them to approximately 3,500 words (though you may write as short as you like). Please do not include your name on the attachments of your submissions. We accept simultaneous submissions, but we ask that you let us know if your work has been accepted elsewhere. Writers whose pieces are accepted for the issue will receive compensation.

Sabrina Imbler is a writer based in Brooklyn. She is a 2019 Margins Fellow with AAWW, and has also received fellowships from the Jack Jones Literary Arts retreat and Paragraph NY.
Tags: