I see them sell stuff on the street – toys, fruits, skirts, shirts, etc. I have heard them speak to their customers, and they hardly speak English.

This daily scene plays out on the street of Manhattan’s and Brooklyn’s Chinatowns got me into thinking: Did they come to the U.S. for this? Or did they come with bigger dreams?

So one day, I set out to talk to them, to ask them about what made them come to the United States, about being immigrants in this country, and about their hopes and dreams. Specifically, I asked them three questions: Why did they decide to migrate here? What important or sentimental items or things did they bring with them? And, would they say that they were able to to make their “American Dream” come true?

These are their stories.

I came here to get married. I met my husband only three times. But this may be true love, because I decided to follow him to the United States.

Chinese people say, “marry a chicken with a chicken, marry a dog with a dog.” Of course I want to go where my husband goes. No matter where he goes, I will follow him.

I am from Guangzhou and my husband is from Hong Kong. He had lived 50 years in the United States. His relatives and friends introduced us while I was still in China. I never thought I would be so far away from my hometown. However, as I began to know him, I believe the power of love brought me here.

In 2007, I immigrated to the United States. I did not bring anything valuable except some old photos of family and friends. Now the technology is so developed that is is very easy to communicate with anyone anywhere. Now there is WeChat and I can keep up with the other side of the world. Even though I’m away from home, I am aware of what’s happening out there every day.

In China my life was good; I had a good job and I had a big house. I was involved in trade and commerce. But here in the U.S., because I do not speak English, getting a job was difficult. So I sell clothes and accessories on the street and I feel I am wasting my talents.

As for the American dream, I just want to live a satisfied life.

It was fate that brought me to the United States. I am not an optimistic person. I believe everything was set up by fate and I don’t control my destiny. I accept whatever happens to me.

I arrived 10 years ago and have been hawking straw craft on Canal Street ever since. On some of the things that I sell, I spent more than five hours creating them. For example, the giraffe is complicated and I made all the detailed parts by hand.

I realized soon that toy animals are the most popular stuff to sell, especially for the kids. There are all sorts of animals and insects: grasshoppers, herons, horses, even penguins. I also make Chinese souvenirs to attract tourists. They come to Chinatown and wanted to bring back some handmade Chinese items, so I make temples, Chinese characters, or hanging decorations.

Almost every day on the same road, on the same spot. Unless the weather is bad, I will be here.

I was laid off in China and couldn’t find work so I brought my craft to the United States. These hand-made straw animals and decorations represent my thoughts of home.

Everyone in my family is in China and they all live very well. They are retired and live in big houses. I am the only one who lives here in the United States. I do not know why I insisted on staying. Maybe this is just my fate to remain here alone.

Nothing has really changed on Canal Street. except the numbers of the year. I realize my youthful enthusiasm is gone. Occasionally I meet my old customers on the street. They stop to chat or to exchange the latest gossip. But always, they have to move along quickly, always in a hurry. As I see them walk away, I can see the passage of time.

Honestly, in the United States, there is no American dream. People only dream of getting rich — a “lotto dream”. I also dream of being rich! If I won the lottery I’d want to buy a mansion and everything I want.

I once thought that I am going to die.

In 1986, I had a surgery for brain tumor. That was a major surgery. I spent nearly $40,000 on medical bills. There was no way for me to work in Fujian. I was lying in the hospital bed recovering. I would never think of coming to the United States.

After seven or eight years, I made up my mind to make the journey. My impression is that America is a free country and the people are particularly good. The air here is also very good. There’s almost no pollution.

After coming to the U.S., I’ve become healthier. So, I decided to start a small business. I went to the wholesale stores in Manhattan and found some toys to sell on Eighth Avenue. I chose toys because there are so many mothers on Eighth Avenue, bringing their children to school and to shop. I thought it would be easy to sell to them.

I did not bring anything to the United States except my two sons. I want them to have the best education. I believe they will have a better future here because they study hard. Unlike them, I grow up in a rural area and I didn’t have much chance to study.

Now, I’m 60 years old. My life won’t change that much, but they (my children) are my hope. They are in primary school now and are doing very well. I’m glad they can get the education that I could not.

There is no American dream for me. The most important dream is that my family is safe and living a healthy life. I am lucky to have a second chance. I won’t ask for more.

Liz Chow is a documentary filmmaker. Born and raised in Hong Kong, Liz came to New York in 2003 and worked for Sing Tao Daily. She holds a MFA in Media Studies from the State University of New York- Buffalo. She has won numerous awards for her reporting on immigration issues. She is currently an Open City Fellow. 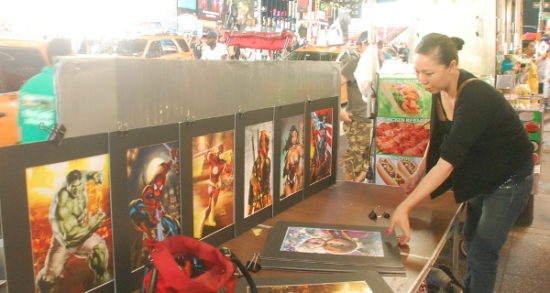 The Street Artists of Times Square
A night in the life of nocturnal street artists and art vendors who, every midnight, take over the New York City neighborhood that literally doesn't sleep.