Editor’s note: Brooklyn’s Sunset Park has long been one of New York City’s solid working-class enclaves, thanks to its waterfront and the industries that sprung up around it in the nineteenth and twentieth centuries. Various groups have settled into the area and made it a vibrant, mixed community. Tarry Hum, an urban studies professor at Queens College, recently released a book-length study of the neighborhood, Making a Global Immigrant Neighborhood: Brooklyn’s Sunset Park. The book examines the interplay of axes of immigrant economics—sweatshops and other lingering manufacturing industries, street vending, and networks of ethnic banks—as well as the effects of city zoning and gentrification. Open City presents an excerpt of the book on how demographic changes in the city’s Chinese population in the mid 1990s shifted neighborhood economic and cultural dynamics.

One of the earliest (and largest) post-1965 immigrant groups to settle in Sunset Park is the Chinese. The emergence of ethnic settlements outside historic enclaves was due to an aging and overcrowded housing stock and the importance of public transportation network. For example, the 1903 construction of the Williamsburg Bridge was a factor in the so-called Jewish Passover from the Lower East Side to new community formations in North Brooklyn. In a similar mode, the BMT N subway line provides a direct link from the Canal Street station in Manhattan Chinatown to Sunset Park’s 8th Avenue. Poor subway services, however, have contributed to the establishment of informal commuter vans that help sustain the intensive, spatial connections between work, residence, and community life for New York City’s Chinese populations in Sunset Park and Manhattan’s Chinatown.

The dramatic growth in Sunset Park’s Asian population took off in the 1990s, driven by two trends—the expansion of the Fujianese population…and the infusion of overseas Chinese capital.

As late as the mid-1980s, only a few thousand Chinese lived in Sunset Park, clustered around several city blocks surrounding 8th Avenue with about twenty or so Asian-owned businesses. However, by the end of that decade, the number of Chinese had nearly tripled and accounted for 15 percent of Sunset Park’s total population. Similar to Manhattan’s Chinatown, Sunset Park’s Chinese population consists mostly of new immigrants with limited or no English-language ability and a high rate of working poverty due to their concentration in low-wage employment niches. More than half of Sunset Park’s Chinese working population is employed in food services, garment production, and personal services such as nail and beauty salons. These shared qualities were highlighted in the Asian American Legal Defense and Education Fund’s successful 1997 defense of Congressional District 12’s constitutionality and boundaries, which unite Sunset Park and Manhattan’s Chinatown as a “community of interest.”

The dramatic growth in Sunset Park’s Asian population took off in the 1990s, driven by two trends—the expansion of the Fujianese population, many of whom are undocumented, and the infusion of overseas Chinese capital. June 6, 2013 marks, twenty years since the grounding of an old freighter named Golden Venture on the shores of Rockaway Beach with 286 Chinese abroad, nearly all from Fujian Province. The vivid media images of Chinese men huddled in blankets on the Far Rockaway in Queens brought stark awareness to an extensive international network of human smugglers and an emergent population of Chinese desperate to leave China. The 1993 Golden Venture grounding also marked the mass detention of undocumented immigrants as federal immigration policy. After the decision to detain Golden Venture passengers in jails and detention facilities in New Jersey and Pennsylvania, “the practice took root.” Among the 286 mostly Chinese male passengers, 10 drowned trying to swim to shore, some were deported, some received asylum, and a large number were detained for more than three years. Upon their pardon by President Bill Clinton in 1997, these men joined the 11 million undocumented immigrants in the United States. Recent news coverage found that a full two decades after the incident, 20 Golden Venture immigrants remain in limbo without legal status.

Peter Kwong in his book Forbidden Workers argues that corporate demands for even cheaper sources of labor and free trade agreements, which eliminate tariffs and regulations and eases the flow of capital across national borders, promote waves of undocumented immigration. Upon its emergence from thirty years of political isolation in the 1980s, China lifted bans on emigration, unleashing a “fever of going abroad.” Once (re)started, the escalation of social and economic dislocations resulting from China’s transition to a market economy dictated by a politically oppressive regime and its complicit support of human smuggling helped to create a vast internal floating population that continues to exert tremendous pressures for out-migration.

The shift in the regional origin of the Chinese migrant population is reflected in the lingua franca of community retailers and institutions, including local churches. Reverend Samuel Wong founded the Chinese Promise Baptist Church in Sunset Park in 1983. After thirty years, he has finally secured a permanent home on 41st Street outside the historic core of Sunset Park’s Chinese population, anchoring that population’s current northern expansion. To commemorate the church’s new building and thirtieth anniversary, Reverend Wong’s dedication service included a special publication of photographs, testimonials, and a timeline of the church’s history. The significance of the Fujianese population was noted in 1994, when Mandarin translation was provided for all church activities, and then again in 2004, when Mandarin replaced Cantonese for all church activities. Over the span of its thirty years in Sunset Park, Reverend Wong’s once Cantonese church congregation is now 90 percent Fujianese.

In addition to affirming family reunification admissions criteria, the 1990 Immigration Act placed a premium on skills preferences that escalated the transnational movement of Chinese capital and people, particularly those with human and financial capital, to the United States. As Ong and Patraporn observe, “These Asian immigrants arrive ready to ride the wave of the new economy contributing their skills, knowledge and dollars in the United States.” This divergent influx of people and investments helped fuel Sunset Park’s economic renewal. Numerous news accounts in the 1990s lauded Sunset Park’s immigrant-driven neighborhood revitalization and specifically Chinese home and business ownership as agents for economic renewal and stabilization. Chinese investors purchased these dilapidated storefronts, transforming Sunset Park’s streetscape and local economy. Immigrant renewal is premised on economic niches defined by the formation of businesses in low-entry barrier sectors such as restaurants, grocery stores, and garment factories, whose profitability depends on reestablishing sweatshop conditions. The formation of ethnic banks helped to underwrite investment in Sunset Park, and as part of a nascent emergent immigrant growth coalition, ethnic banks are a key factor in real estate development and speculation.

As one of New York City’s most diverse neighborhoods, Sunset Park includes among its Pan-Latino and Chinese population a visible and growing Arab American and Muslim population. Although the Fatih Camii Mosque (Conqueror’s Mosque) was established by the United American Muslim Association in a former theater building on 8th Avenue when the commercial avenue was still referred to as “Little Scandinavia,” a visible Muslim community did not emerge in Sunset Park until the 1990s. New York City’s Arab American community is largely centered in neighboring Bay Ridge; however, relatively less expensive rents led to the establishment of numerous institutions, including mosques, community centers, catering halls, and the Al Noor School (a K-12 private educational institution) in Sunset Park. Founded in 2001 a few months after the 9/11 tragedies, the Arab American Association of New York established an office in northern Bay Ridge bordering Sunset Park. Sunset Park resident and community activist Linda Sansour serves as the executive director and was recently featured in a New York Times video and news article on new immigrant enclaves. Sunset Park’s Muslim population consists of Arab Americans of modest socioeconomic means and a small Pakistani community.

The formation of ethnic banks helped to underwrite investment in Sunset Park, and…[they] are a key factor in real estate development and speculation.

As the neighborhood site of the federal Metropolitan Detention Center (MDC), Sunset Park holds particular significance in the post 9-11 treatment of Arab and Muslim Americans. Despite community protests that Sunset Park was once again a “dumping ground,” the federal prison, which has a maximum security unit, was constructed on 29th Street and 3rd Avenue in 1993. As community activist David Galarza noted, “It’s a symbol of what can happen if you exercise your right to free speech.” Through several months of 2002, weekly protests organized by human and immigrant rights organization took place outside the facility to call attention to the detainment of eighty-four Arab and South Asian immigrants without cause and the subsequent hardships on their families and communities. Referred to as Brooklyn’s “Abu Ghraib,” Sunset Park’s MDC became the subject of a 2003 Department of Justice investigation which found widespread abuses of immigrant detainees.

In 2001, four prominent New York City political leaders were jailed at the MDC for trespassing on military property in protest of the U.S. Navy’s bombing of the Puerto Rican island of Vieques. Serving sentences of between forty and ninety days were the so-called Vieques Four—Roberto Ramirez, chairman of the Bronx Democratic Party; then-City Council member Adolfo Carrión Jr., who lost his bid for mayor in 2013; New York state assemblyman Jose Rivera; and Reverend Al Sharpton. Several rallies were held outside, including one with the mayor of Vieques and another when Reverend Sharpton was released from prison and proceeded to lead the protestors to the nearby 3rd Avenue site, where four members of the Peña-Herrera family were killed by a drunken police officer.

Two Mothers: A Comic Based on Interviews with the Mothers of Akai Gurley and Peter Liang
'How should I feel after bringing someone into the world to them have them unjustly taken from me?' 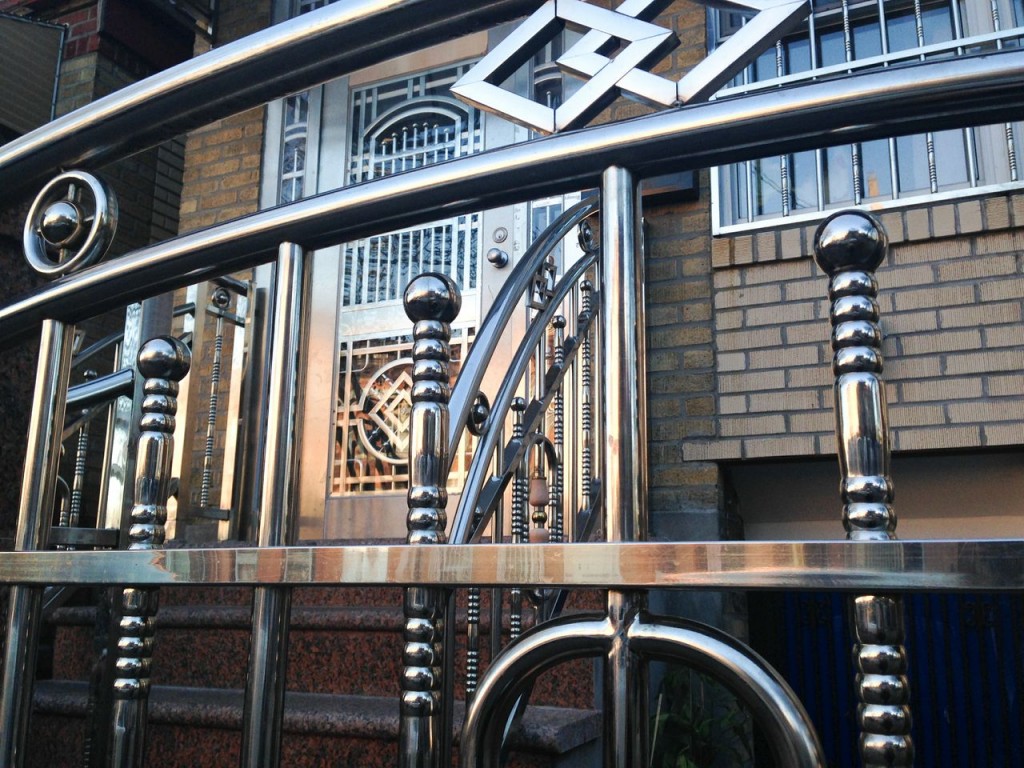 All That Glitters…In Sunset Park
The gate, the window guards (all seven of them), the railings leading up to the door, the door itself — all bright stainless steel, and sparkling even on this cloudy day.