Following in the footsteps of Dorothea Lange, who photographed stoic, suffering faces during the Depression, the Chinese-born artist traveled across recession-worn America, capturing a different sort of face. 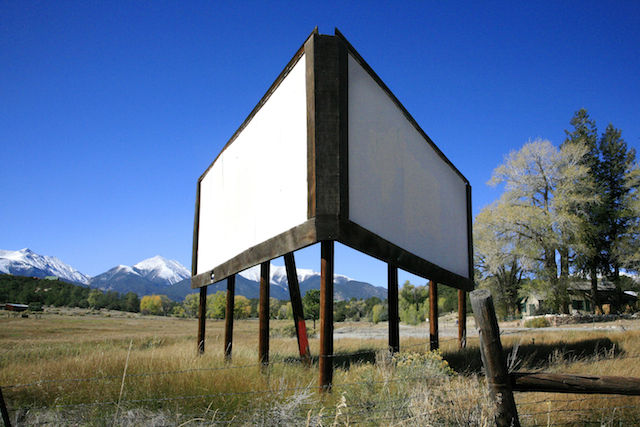 A gigantic wooden billboard dominates I Am Your Mirror, an exhibit on view at the Vilcek Foundation Gallery through November 10. It is, one might say, a meta-installation: the life-sized replica (its face peeling, its back and legs defaced by graffiti) advertises the image of another billboard (its surface corroded and blank, graffiti its only display). One message, scrawled across it in bold red, reads: “BLESS YOURSELF.” Another presents an ungrammatical diagnosis, in black: “Its your heart.”

The installation is the work of Chinese-born artist O Zhang, who shot more than a thousand photographs during two years of extended road trips across recession-worn America. I Am Your Mirror is the result of her journey. In addition to the life-sized billboard replica and traditional framed prints, the floor of the gallery has been scattered with weather-treated photographs, and on the wall, a collage roughly traces out the map of America. The mixed-media exhibit showcases what Zhang found: not the faces of stoic, suffering people, as Dorothea Lange did on her Depression-era trek across the United States, but the faces of blank and neglected billboards.

Zhang has taken an object that has long been a canvas—with pop art icons such as Andy Warhol designing billboards for the Sunset Strip—and made it the subject instead. Through her lens, an object once denounced as the crass enemy of aesthetics reveals its beauty: the minimalist array of rectangles, squares, lines and curves interacts with the landscape in a rueful geometry. In one image, the rusty skeleton of a billboard, a naked grid, finds it visual echo in the criss-cross of a barbed wire fence and the intersections of telephone poles and their lines; the palette is dead-brown, and the symmetries are severe. In another photo, three empty billboards, the middle one higher than the rest, evoke a cross. In capturing the formal elegance of the bare billboard, Zhang has, in some sense, flipped the script. It’s not the printed images and text on them that matter, but the structures themselves.

The billboard in America has long been a larger-than-life cultural signifier, as enormous as the Marlboro Man emerging from the Hollywood hills or the expanse of bare torso (courtesy of Calvin Klein) stretching divinely above. From the beginning, billboard owners and their critics waged battles over what America represented: Were billboards symbols of the American spirit, or perversions of it? Did they signal that any and all could aspire to the good life, or that mass consumer culture was crowding out individualism? Did they attest to our pursuit of beauty, or obstruct it? An anti-billboard cartoon in Nature in the 1920s, when the campaign against outdoor advertising went national, delineated the difference between highways and what were dubbed “buy-ways.” One panel depicted cars cruising through a pastoral scene. Another showed cars driving past a blighted landscape of billboards hawking beauty cream, hot dogs, and motor oil. 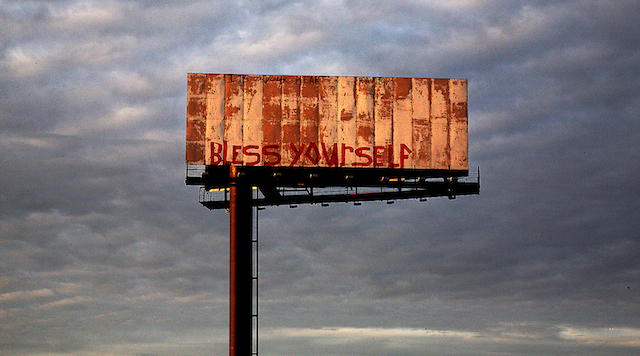 It’s no wonder, then, that the singular image haunting the great American novel of the Roaring Twenties, with its unprecedented material excess, is a billboard. In The Great Gatsby, blue, bespectacled eyes stare out from an optometrist’s ad, over the industrial slag heaps of Long Island (literally) and the moral wasteland of money-obsessed America (symbolically). Fitzgerald’s billboard, like those documented by Zhang, is faded and forsaken. Its omniscient eyes watch over a valley of ashes as gray as some of Zhang’s photos. One of the novel’s characters, a cuckolded mechanic whose wife is killed in a hit-and-run accident, mistakes these billboard eyes for the gaze of God. Recounting one of his last conversations with his wife (who had been seduced by a wealthy businessman and the glittering gifts he could bestow), the humble mechanic reveals that he pointed to the yard-high retinas on the billboard and said to her: “God knows what you’ve been doing, everything you’ve been doing. You may fool me but you can’t fool God!” “That’s an advertisement,” his consoler corrects him.

The omnipresent billboard in Gatsby signifies not the American Dream, but its decline, in the grip of the Golden Calf god of capitalism. Is that also what Zhang’s I Am Your Mirror reflects, nearly a century later? Do these dilapidated billboards, strung from sea to shining sea, mirror our bankruptcy and decay after Wall Street’s unchecked orgies? Do her photographs gesture, on our cerebral screens, towards the free fall at the opening of Mad Men, when a Don Draper cutout careens through a cityscape in which the buildings have become billboards: vivid flashes of fishnet stocking and female skin, red lipstick and nail polish, tumblers of liquor commanding us to “ENJOY THE BEST AMERICA HAS TO OFFER”? When we look at Zhang’s stripped-down images, are we alarmed at what’s absent? Or in those large, wheat-paste-able blank spaces—where the sexiest, consumerist best that America has to offer should be—do we see a call to find our fulfillment and happiness elsewhere? (BLESS YOURSELF. Its your heart.)

We might see what’s no longer there, or contemplate what still is. Zhang says: “A blank billboard is like a blank canvas. It is a symbol of a new beginning. Where is the economy going? What is our future? It is up to us to write the message on it.”

Zhang’s own eyes, which stare out at an American landscape of empty billboards and discerns possibility and beauty, are immigrant eyes shaped by a foreign landscape. In China, signboard images bombard; Communist Party propaganda mingles with product-pushing capitalism. There, billboards are rarely bare. Zhang, who moved to the US in 2004, was shocked by all the disused billboards she encountered here. But, coming from a culture where emptiness pervades high art, with entire terrains of blank space in traditional Chinese ink painting, Zhang could see the positive. “It is refreshing to see a billboard without a message,” she says. “So, no more brain-washed.” By Chairman Mao, or buy-ways.

Although most of the billboards she photographed lack overt messages, Zhang explains, “they are not silent.” Some of the images express the sorrow of the derelict: scraped-away layers reveal the palimpsest of a Super 8 motel ad. Other images convey repose. Like minimalist paintings, they promote, through their focus on structure and alignment, a meditative calm. A stark beauty also emerges from incidentally captured elements of American landscapes: snow-capped mountains, a framing canopy of palms at sunrise or sunset (it’s unclear which), the yellow lines of a highway emerging boldly from the amorphous fog. 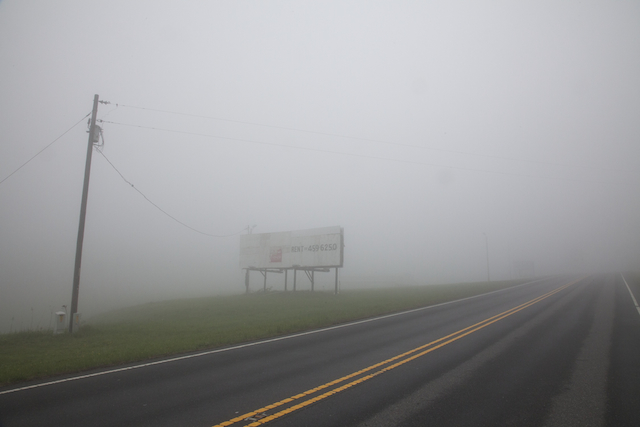 The exhibit doesn’t identify where the photographs were taken. Any sense of location comes from stray details: a cactus, for instance, or a road sign pointing to Yankee Stadium. Without captions, the broad-stroke setting of these photos is Everywhere, America—a mostly unpeopled Everywhere. One photograph that does feature people, in a Latino neighborhood, stands out: here, for once, the blank billboard takes second billing. In addition to the motion of pedestrians, there is the color of commercial text. El Diario is printed on a pavement newspaper box. Pan, burritos, gorditas are advertised in red across the yellow flank of a grocery store. Vitality exists yet. Finally, after so much emptiness, there is a glimpse of hope.

Zhang’s innovative work signals a new phase for billboards in the American imagination. In the beginning, they were considered an aesthetic blight, the enemy of beauty and art. (The slogan of the main anti-billboard group in the 1930s was: “Save the Beauty of America: The Landscape Is No Place for Advertising.”) Then billboards became canvases, for Madison Avenue whizzes and iconoclasts like Warhol, signifying surfeit and mass consumerism. And now, through Zhang’s lens, they are themselves the naked subject. One anonymous spray-painter saw the possibilities of this trajectory in 1977, when a billboard lay whitewashed and waiting for just a few days: “Can this be art?” the graffiti artist asked. Through her work, Zhang suggests the answer.

Gaiutra Bahadur is a writer, critic, and journalist based in Jersey City, New Jersey. Her book Coolie Woman, a personal history of Indian indenture in the Caribbean, was shortlisted for Britain’s Orwell Prize for artful political writing in 2014. A journalism professor at Rutgers-Newark, and a former newspaper reporter, she writes for The New York Times Book Review, The New York Review of Books, The New Republic, The Nation, and Dissent, among other publications. Her work has been recognized with literary residencies at MacDowell and Italy’s Bellagio Center and fellowships from Harvard, the British Library, and the New York Public Library. She has also written for The Margins.

EXCERPT: The Story of My Assassins
"Our Mordor was the same. Our Frankenstein was the same. Our Tinker Bell was the same. We didn’t have to imagine Davy Jones—a graphics company in Silicon Valley was manufacturing him for us. We all picked our visuals from the universal pool. The individual monster was dead."