‘Dark, dark, too dark a dark everywhere / Lovers drooping their necks / Dark as though picking up that darkness / And, again, inside that darkness / There are wolves and dogs on the prowl’ 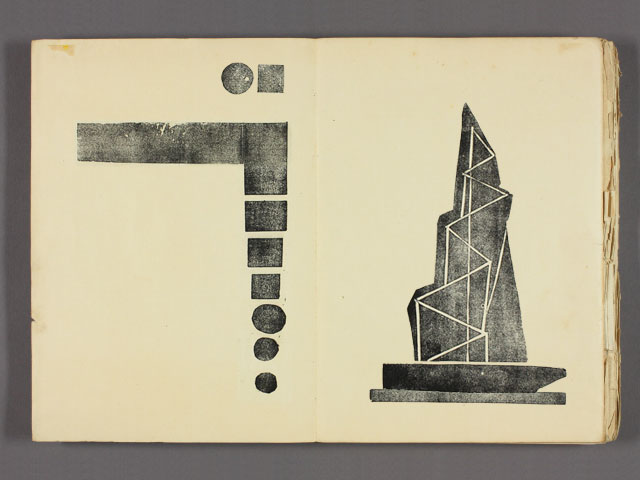 “We must quickly volunteer ourselves, dash forward blindly, and create,” wrote poet Hirato Renkichi (1893-1922) in his 1921 Manifesto of the Japanese Futurist Movement. Referred to as the “Marinetti of Japan,” after the Italian founder of Futurism, Renkichi’s experimentations with style, space, and speed in his poetry influenced the Japanese avant garde for years to come. His contemporary, Hagiwara Kyojiro (1899-1938), an anarchist and Dada poet, incorporated his revolutionary politics into his poetry and infamously wrote “Poetry is a bomb! Poets are dark criminals hurling bombs at the hard walls and doors of prisons!” in the manifesto for Aka to Kuro (Red and Black), an anarchist poetry magazine.

Renkichi and Kyojiro both died young, Renkichi struggled with pulmonary disease until 1922 and Kyojiro passed away at the age of 39 in 1938. Japanese Futurism did not last much longer after their deaths. But despite being a short-lived movement, Japanese Futurism was hugely influential for early avant garde literature in Asia, and these works by Renkichi and Kyojiro, translated by poet Sho Sugita, offer a small taste of their revolutionary poetics.

All poems translated by Sho Sugita

This city the East boasts
With name and reality becoming the memorial tower of fire
The torchlight bridging the sky
From the city of the Bolshevik
From Beijing, from Warsaw
Also from London or Paris or Berlin
Uniformly glaring its looks
I think the more luster the better.
Even then, now
How to deal with this dark melancholy,
The majority of people deprived of leeway or interest
Running the backstreets on the sly
Dark, dark, too dark a dark everywhere
Lovers drooping their necks
Dark as though picking up that darkness
And, again, inside that darkness
There are wolves and dogs on the prowl
Everywhere dark
Sundry bacillus continues to multiply.
Not sparing oneself
Torch the damp firewood
Brightly illuminate
Every dog and mosquito and bacillus
Until they are charred to death
The faces of people walking the streets
Until they are brightly shimmering in bronze
Torch, exert—
Our young compatriots.

When the sun of summer disrobes from its heavy coat
And dances around above the black dahlia field with fertile heat and smoke,
At that bar below, I offer my cup of intoxication
As the dusk passes through eaves to scatter the smell of the forces
A white blade flickers across
And where did the boiling blood bath go, and where did the sweet tears go,
Imagination, reason, anxiety, ennui and the hearse that became full with its memories
and conflicts

Pass the tree line and in front of me,
The window opens and the breeze is truly refreshing.
The liquor above the marble lets loose new gears
Fragrant like the lover of the sky,
My eyes were gazing upon the pendulum of a clock not knowing when it may awaken
The yawn gripped inside the small ivory box had been crushed by the sparks on the
roadside

It’s a grave! It’s a grave!
Loveidealsdreams will all expose themselves
Nowabout to go into ruins!

Ah!Anyone anything
Jump out of the wall!
Bite my head! Bite! My body!
Bite, bite! Bite me to death!

On the red label
The price of Hokkaido-produced salmon and a human
Tagged 50 cents.

—Desperate ants
—Struggle in the antlion pit while swallowed
—Machines out of oil
—Always on idle runs
—At the bottom of a cone
—Unable to crawl up, the corpses
—Tumble while turning their eyes to the heavens

On the red label
The price of Hokkaido-produced salmon and a human
Tagged 50 cents.

Hirato Renkichi (????), born Kawahata Seiichi on December 9th 1893 in Osaka, attended Sophia University in Tokyo for three years before dropping out and attending Gyosei Gakko to study Italian. He started writing poetry in 1912, first publishing in Banso under the guidance of Kawaji Ryuko. Although he worked at Hochi Shimbun News and Chuo Geijutsu Art Publishing, he suffered from a pulmonary disease, often failing to make ends meet for his family. He passed away on July 20, 1922 in Tokyo, at the age of 29.

Hagiwara Kyojiro (1899-1938) was a radical Japanese anarchist and DADA poet. He was an essential part of avant-garde poetry coteries and artist groups during the Taisho and early Showa eras, including Aka to Kuro (Red and Black) and MAVO. His first book, Death Sentence (1925), fused spatialized poetry with linocuts and mixed-media collages. He died of hemolytic anemia when he was 40 years old.

Sho Sugita lives in Matsumoto, Japan. His poems and translations have appeared widely in journals, and his translation of Hirato Renkichi’s Collected Writing: Spiral Staircase is forthcoming from Ugly Duckling Presse (Spring 2017). More information can be found at www.shosugita.net