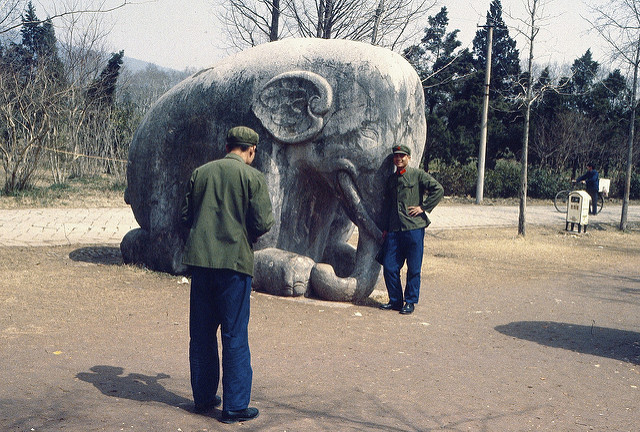 Though it’s been some time since the shooting at Pulse was in our daily news cycle, Chen Chen’s poem continues to resonate with us who have been victims of racism, homophobia, and transphobia. Using the lyrics of Brooklyn-based electronic musician Yaeji, Chen Chen’s elegy is simultaneously mournful and hopeful.

Because their clumsy-but-
don’t-care, their beauty, the beauty of the night lit up
by a lyric, a kiss, some impossibly
impeccable hair.

Because forgetting all danger because the lungs need to. The legs.

Because in the music video Yaeji dances
to the rhythm of her own satirical ritual, finding joy, or something like it.

Because their finding each other.

Chinese filmmaker Liu Jian’s latest neo-noir thriller might only span 77 minutes, but Have a Nice Day (好极了) is a remarkably ambitious (if pessimistic) look at life in an unnamed and underdeveloped southern Chinese city. In a follow-the-money tale, Liu takes us for a spin with multiple characters and plotlines that converge to form a sharp, layered critique of Chinese autocracy and capitalism writ large.

Liu gives viewers an acute look at an under-developed corner of the world that he imagines is exclusively inhabited by would-be refugees. This place isn’t a self-contained microcosm: it exists in parts that you, as a relatively passive viewer, must combine in order to understand what you’re looking at. Characters only think they’re passing through, but are actually forever stuck in place. Their delusions of importance are what makes them funny, though never in a laugh-out-loud kind of way. They stumble around, threaten each other, and dream of new lives far away from their purgatorial home. But their futures are always in the abstract, never to be independently realized. “Have a Nice Day” is accordingly a complex comedy that’s small enough to hold in the palm of your hand (it’s also only 75 minutes long).

STEM over Storytelling: An Immigration Story by YZ Chin

In this deeply intimate piece by YZ Chin, author of the forthcoming Though I Get Home (Feminist Press, 2018), Chin articulates what it feels like to find home away from homeland, and the seemingly Sisyphean feat of trying to acquire legal residence in the United States. Underneath that, however, is a powerful and personal reflection on the geographical histories we carry within us.

Perhaps this is why some of us do not proudly carry our family histories with us. Faced with the existential conundrum of going back to where we have never been, we try to downplay our cultural origins in exchange for being treated as “true” citizens. As if we were saying: Look, we have no back-up nationality squirreled away; we have nothing if you do not grant us this.

That was why I needed to write about Malaysia. I had traveled to a new land, where people also occasionally yelled at me to “go back;” this time, there was a real place that I had left. And I would not let them intimidate a whole country out of me.

In this sobering reportage, Malaysian writer Bernice Chauly provides a meticulously-researched account of the little-known history of the Batang Kali Massacre, usually understood as the “Britain’s My Lai.” In researching the history of the incident—which has by and large been erased by the public memory of the nation—Chauly draws attention to the multiple links between colonial violence, anti-communist paranoia and the selective processing of trauma.

A massacre on Malayan soil? By British soldiers? Why wasn’t this in our history books? Why wasn’t this part of our national consciousness? And why, in 1990, was there still no apology or compensation from the British government? I had many questions. Now, almost seventy years after the massacre, the event still looms, unresolved.

Why has the British government maintained its silence for almost seventy years? Was it because they ‘won’ the war in Malaya? That it was unlike the horror of the Partition of India, or the catastrophe of Palestine? Was it to preserve one possible vestige of colonial pride?

Drawing on John Berger’s now-famous observation that “publicity turns consumption into a substitute for democracy,” Chen reflects on the rise of the Google Arts & Culture app and its facial-recognition capabilities. In this thoughtful meditation on the white-skewed coded gaze, Chen ruminates on the potentially dystopian implications of seeking representation by offering ourselves up to the computer’s gaze.

In one way, the art selfie app might be seen as a fulfillment of Berger’s effort to demystify the art of the past. As an alternative to museums and other institutions that reinforce old hierarchies, Berger offered the pinboard hanging on the wall of an office or living room, where people stick images that appeal to them: paintings, postcards, newspaper clippings, and other visual detritus. “On each board all the images belong to the same language and all are more or less equal within it, because they have been chosen in a highly personal way to match and express the experience of the room’s inhabitant,” Berger writes. “Logically, these boards should replace museums.” (As the critic Ben Davis has noted, today’s equivalent of the pinboard collage might be Tumblr or Instagram.)

Happy Black History Month! Gill and Desai’s biography of Hucheshwar Gurusidha Mudgal, a Karnataka-born immigrant who became closely associated and directly involved with the Garvey movement, reflects on the interconnected histories of solidarity between the struggle for Black liberation and worldwide anti-imperialist movements.

Writing during the post-war period, Mudgal often stressed the interconnected nature of the African American struggle and worldwide anti-imperialist movements. In a column from 1931, he emphasized that “the American Negro is […] indirectly affected by the seemingly remote events in China, India, Egypt, Kenya, Tanganyka (sic) or South Africa” and thus “must be wide-awake to their import.” […] For Mudgal, Indian independence would play an especially critical role in breaking the global color line. “A successful revolution in India,” he wrote in his “Foreign Affairs” column, “means a complete collapse of the present sinister imperialism the world over.”