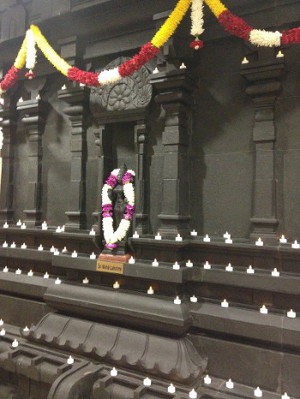 Good morning, sister ji! Happy Diwali! Pundit-ji’s voice on the telephone from India is full of gusto. It is Monday night in New York City but Pundit-ji’s enthusiasm is infectious. I sit upright in bed and turn on my bedside lamp. A rooster crows in the background. Pundit-ji giggles, adding, The bird is sending his greetings, too!

I don’t know Pundit-ji’s full name or his exact whereabouts. But I have developed a fondness for his zany laugh and ever-positive prescriptive readings of my future. I met him in Jackson Heights in March, when I was lured to his office in the back of a basement by his wife Lakshmi, who was standing on 74th Street, dressed in a glittering turquoise sari and handing out her husband’s business cards.

In his cramped, lime-filled office in Queens, Pundit-ji—dressed in a yellow kurta, face framed by oily curls, eyes lined with black surma—had proceeded to tell me certain intimate facts about my life with uncanny precision and notified me that I’d been cursed by the evil eye and that he needed to do a series of poojas to rid me of it in order to get the positive energy flowing back in my life. I was enthralled by the performance so I succumbed—for entertainment purposes, I convinced myself. A few weeks later, he called from JFK Airport to say his grandfather had suddenly taken ill, that he and Lakshmi and their little boy were leaving for India. He would continue to do his poojas for me from there, he promised.

Now, astonishingly, he was calling from his village to tell me to recite the mantra for the goddess Lakshmi, the deity of wealth, good luck, and beauty, and to maintain a vegetarian diet for the day. “Sister-ji, in your name today, I am feeding poor people and giving out nine saris. Great blessings for you!” he tells me.

As a Muslim, I don’t observe Diwali, but as a resident of diverse New York City, I feel compelled to learn about the Hindu festival of lights. I realize, not without a tremor, that my interest has been fueled by Pundit-ji and the fact that he is purportedly carrying out a pooja in my name somewhere in a village in southern India.

Respectfully curious, I resolve to visit the Ganapati Temple in Flushing, Queens. Located at 45-57 Bowne Street, the temple is an architectural wonder in this neighborhood of immigrants, rising up like an ancient relic, its ornate carvings bathed in indigo light. Despite the frigid evening, women are dressed in spangled saris and men in embroidered cotton kurta pajamas, and I marvel at their beautiful outfits as I take my boots off at the door. I hover by the entrance, near a plastic bucket full of coconuts, and take in the gleaming marble floor, the hushed ambiance that is broken only by the intermittent chanting of priests.

No one asks me any questions and apart from a few cursory glances, I am left alone to my thoughts. I step inside, drawn to the visually tantalizing treat of diya clay candles, Prasad sweets, and stunningly adorned shrines dedicated to various deities. I circumambulate the spacious room, pausing to admire a display of decorated coconuts. Imitating the congregants, I slip dollar bills into the boxes set up at each deity’s shrine. At Mahalakshmi’s shrine, I wait my turn to stand before a priest who holds up an oil lamp with a burning flame. I place my hands side-by-side over the flame and touch my fingers to my forehead. The ritual feels powerfully auspicious even to me, a non-believer. I find myself wondering about my ancestors on my mother’s side of the family, wondering if many hundreds of years ago, they, too, had worshiped at the feet of Lakshmi. 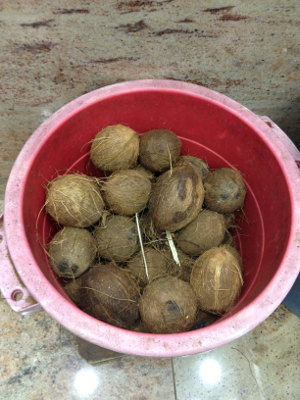 As I walk past Hanuman, the monkey god, I pause, riveted by his gaze. I decide to go back out to the entrance and buy a coconut as an offering. The queues are surprisingly efficient. Mere minutes later, the priest at Hanuman’s shrine takes the coconut from my uncertain hands, places it at the monkey god’s feet and gives me a marigold flower, in exchange, as a blessing.

On the way out, I buy two sugared laddoos and a Lakshmi silver coin that has been dipped in gold. Brimming with questions about the rituals of Diwali, and feeling self-consciously ignorant, I ask the man at the sales counter if he can explain the importance of the goddess Lakskhmi. You will have to speak to someone in the PR department tomorrow, he says, matter-of-factly, indicating the long line that has formed behind me.

Outside, I put my boots back on and watch congregants stream in, multi-generational families that include grandparents and toddlers, in-laws, aunts, and uncles. It’s too cold to linger outside but, reluctant to leave the festivities, I pop into Dosa Hutt, adjacent to the temple. Every table is occupied and a long take-out line snakes through the restaurant, but I decide to fortify myself with a mango lassi and paneer bhaji dosa before the long ride home.

A family leaves and a table opens up. I sit down, feeling slightly guilty. Almost instantly, an elderly Indian man asks if he can share the table with me.

Sure! I say. How many of you are there?

Oh, it’s just me, he declares. His solitariness is surprising on this festival evening, especially in a culture that is communally oriented. I detect an aura of loneliness about him and realize that I, too, must strike an odd picture, more so for being a woman. Someone swoops over to our table to ask if they can take the remaining empty chairs.

Mr. Bhattia and I quickly discover that we share Lahore, Pakistan, as the city of our births. His family migrated to India during Partition, while my mother’s family moved from Bombay to Karachi. When he learns that I am Muslim and visiting the temple out of a desire to learn about Diwali, he delves into the myth of Rama and tells me that it is, ultimately, a tale about loyalty and devotion.

Mr. Bhattia’s dinner is ready before mine and he encourages me to try his uttapam. We compare Hurricane Sandy stories. I learn that he is a proud grandfather. And I sense that we are equally grateful for each other’s dinner company. The conversation takes a somber turn when Mr. Bhattia tells me he has just gotten divorced after thirty years of marriage. He says that he is ashamed to admit it, especially given his cultural background. I share with him that I am just coming out of a 22-year marriage myself.

It is the night of a new moon as well as a total solar eclipse. They say that this night is a time to release old habits that aren’t working and confront crippling fears and doubts in order to open the way for luminous new possibilities. On this darkest of nights, rows of earthenware oil lamps signal the triumph of good over evil, and the beginning of a new cycle and a termination of the old.

Mr. Bhattia offers to drive me to the train station after a tour of Forest Hills Gardens. “You must see it if you haven’t. It’s a very special, exclusive neighborhood!”

We walk into the parking lot of a supermarket, deserted except for a gleaming gray Jaguar, as striking and anomalous in these humble surroundings as the Ganapati Temple’s ornate architecture. Mr. Bhattia opens the passenger-side door for me and points out the Hindu Center where he goes every Tuesday to offer pooja to the deity Hanuman. That’s where he had been earlier, before deciding on the spur of the moment to go to Dosa Hutt for dinner.

Hanuman is a very powerful god, Mr. Bhattia says. My father really believed in him. I am following in his footsteps.

I buckle my seat belt and admire the immaculate interior of Mr. Bhattia’s car. What a surreal evening, I think. I’d just dined with a stranger, with whom, it turns out, I share the oddest commonalities. Here I was, a curious New Yorker whose ancestors on one side of the family, hundreds of years ago, were Hindu, who had been inspired by a roadside pundit-astrologer to discover that ancient heritage in Flushing, Queens.

In many ways, it had been a quintessential New York evening, filled with fecund serendipity. And yet, I thought, looking up at the sky as the Jaguar cut past a honking city bus, it felt extra special, too, lit up and graced by Lakshmi’s benevolent aura.