‘I was still getting used to the place—how quiet the suburbs are, how calculated in their quietude.’ 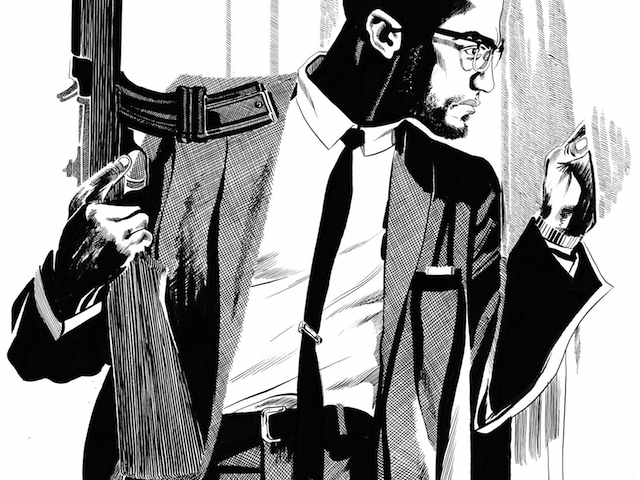 When I call my husband Quincy a peeper, he gets upset and steps away from the roller blinds.

“Looking out the window like Malcolm,” he says, quoting one of his favorite Ice Cube songs.

I wonder what Malcolm X saw from his window. Did he, like us, have a mid-day pigeon-feeding lady? Did 5 pm blister with car honks? Did he have anyone like our I Love You Man, the dapper elderly fellow who nightly chants “I love you, I love you,” while walking up and down our stretch of New York City blocks in his Sunday best? His preacher-ly roll call so familiar now, we worry for him when we don’t hear it. Could a man like Malcolm ever find such steady metronomes in his surroundings? Could he trust a window like that?

“He’s a nerd,” I say to Quincy as he shows me the picture.

It is the famous black-and-white shot of Malcolm parting window curtains with his left hand while cocking a rifle up with his right. He is wearing a grey-toned suit, a white shirt, and skinny black tie with a tie clip on it. His pants ride up high and are fastened with a belt, which leads me to believe that he was not merely a nerd but, perhaps much like Quincy, a thin Black nerd.

We are in bed talking like this, having one of our early-morning, half-awake chats, our breath still grimy with the burden of our dreams. We are using his laptop to look at Malcolm—looking into those other sorts of windows that compete for our attention.

We look at more Malcolm photos—nerd, nerd, nerd they all cry out, even a mugshot from his “Detroit Red” years.

The computer starts to move slowly.

“You have too many windows open, again,” I say. “I know,” Quincy says.

I let it go, though we have fought over less.

Unlike most of the photos we have come across, I have trouble tracking the picture of Malcolm at the window to any official source. Some think it might have been part of a 1964 Ebony magazine shoot, but the picture was never included in the magazine’s profile. It is a peep itself—never intentionally collected. And yet, looking at the picture, I can’t help but feel like Malcolm knew someone always had an eye on him—be it through a camera lens or past a curtain—and always would.

When Quincy and I got engaged, I remember a friend saying, “You know, I bet he did it just like Malcolm did, asking Betty, ‘want to do this thing?’”

The truth was Quincy had a ring in hand months before he asked me. For at least three months, he jokes, he already felt engaged. We lived on the outskirts of Philly then, in a sleepy “Main Line” suburb. I had moved there a few months earlier from New York City to be with him. I was still getting used to the place—how quiet the suburbs are, how calculated in their quietude. No furious mess of sirens and honks, no neon urgings of 24 hours or delivery, no hawker or vendor in sight. No symphony of languages when walking down a street, no Indian people besides me, no Black people besides Quincy, no slip of smile or passing head nod to a stranger who could easily be an uncle or auntie. I began to have some kind of inverse relationship with the place—the more I fell in love, the more lonely the place felt to me.

But Quincy seemed so still, always looking out our window, out into the unremarkable ’burbs. We lived on the ground floor of an apartment complex and so our blinds there, the metal panel kind, were almost always drawn. The metal had in fact become so old and rusted that tugging on the pull-string would cause the whole contraption to come down. So Quincy really did have to look out like Malcolm—part blinds with his fingers and just peek. It looked as if we lived with a feeling of suspicion, Quincy keeping steady watch like a sentry. But what was there to be suspicious about—how neatly lawns were manicured or sedans were parallel parked? What was the hold-up? What was he witness to that I could not see?

So I began to call Quincy a peeper, when the greatest danger I felt was him turning his back on me.