Christine Hyung-Oak Lee is a writer whose work I’ve been reading since 2006. That summer, I was a resident at Hedgebrook, an all-women’s residency on the Puget Sound. I was in between places, literally: all my belongings were in storage (in my car) in Texas, and I was two months away from moving to Ann Arbor for grad school. I didn’t yet have a place to live.

Christine was the first other resident I met. I knew right away that I wanted to be her friend. We spent weeks on the island writing and towards the end of her stay, a queen bee migrated and moved her entire hive with her. Christine and I watched the massive, moving cloud of dark bees from the main house, where residents gathered to eat dinner every night.

A few months after that, Christine suffered a stroke. She was able to text and let me know. I went to visit her a while later, a visit she doesn’t really remember. Ten years later, she’s written an astounding account of that time, her illness, her memory, her recovery, and how she managed to heal. Spoiler: a lot of it has to do with writing, with recording, and with the power of narrative. 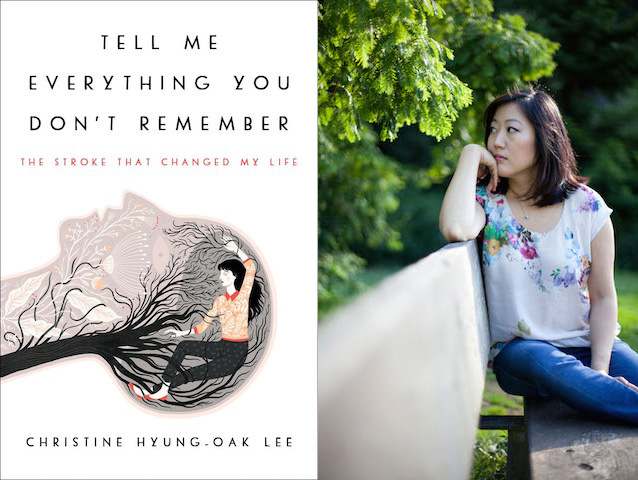 Randa Jarrar: I admire the different craft choices you’ve made, putting this story together. The way you layer these different forms: information you’ve gathered from your own journals, from conversations with your neurologist, from your past as an immigrant, braided with the Billy Pilgrim/Slaughterhouse-Five format, numbered sections of lyrical memoir, and more. When and how did you decide that this book would have to be told in these varied, kaleidoscopic ways?

Christine Hyung-Oak Lee: Thank you—I’ve always admired your gutsy work (that chapter using A Tribe Called Quest’s lyrics in your novel A Map of Home!), so a compliment from you means a lot to me.

But, as for when and how I made my decisions to tell my story the way I did…

Here’s the thing: necessity is the mother of invention.

Here were the needs at hand:
1. Fill my gaps in memory.
2. Turn an essay into a book-length memoir.

I couldn’t remember most of what had happened when I suffered the stroke—so I had to use my journals and medical records as a resource. That was a given. Over the years, I’ve pieced together the experience and crafted my own narrative. But, I’ve always relied on written records to keep me in check. Present me completely thanks past me for having kept a journal and a blog.

And in writing a book-length work, I had to find a structure that worked. I struggled a bit with this—and then, as I always do, I checked out other works for inspiration. The work that ultimately inspired me was the book I’d been reading at the time of my stroke: Slaughterhouse-Five. Billy Pilgrim’s journey oddly parallels mine, and so every time I got lost in writing, I went back to Billy Pilgrim and Kurt Vonnegut. Billy Pilgrim travels through time, as did I; in doing so, he is able to communicate his entire life history, and he served as my guide.

In one section, you write that the brain, unlike any other body part, is both a conductor of healing and the object of healing, and that your brain was now charged with both. I’m interested in the way your book explores this duality, and others. How can we remember what we cannot remember? How do we, as children of immigrants, go through a war when there is no longer a war? Can you talk a little about ways you chose to explore this in the book? How did you keep from becoming overwhelmed by this duality?

I am a walking duality. My dad used to brag, “I am a paradox.” When I was five years old, I didn’t understand what that meant. And now, in my writing, doubling is an ongoing theme. I can’t help it. If it’s said, “Write what you know”—well, that’s what I know.

Chris Abani, who read an early draft of my novel, The Golem of Seoul, pointed out a prevalent theme of doubling throughout my work, and from that point on, I’ve been keenly aware of how that plays into my life and work. I’m not just American or Korean. I’m not an immigrant, but I am a child of immigrants who inherited their PTSD, and yet can walk in a peaceful world as well as one wrought with conflict.

The brain itself is a duality—there is the organ that functions as the body’s conductor. And then there is the mind that makes up stories. I had the unfortunate privilege (there’s that duality again) of experiencing my brain go offline, and then experiencing how my mind made up stories when my brain couldn’t figure stuff out.

There is light. There is shadow, there is misfortune, but there’s also opportunity alongside misfortune, if you keep your eyes open to it. Nothing is completely one thing. And because it’s inherent to me, and not an intellectual adventure, I think it was natural to not fall into overthinking it. I hope that makes sense.

Although the book is about the effects of a stroke on your particular psyche, body, brain, and life, it is also intimately familiar because it’s about how we all, eventually, become different protagonists in our own lives. Talk about why and how Slaughterhouse-Five, and your experience of reading it, is such an important part of this book.

Slaughterhouse-Five is a permanent part of my mind. It’s branded into my brain at this point. It’s what I was reading at the time of the stroke, and by reading I mean reading the first paragraph over and over without realizing I was doing so because my brain was so damaged. I can’t imagine a more fitting book to have been reading at that particular moment. What other book would be so empathetic to my state of mind? To being lost in time?

When I finally got around to reading Slaughterhouse-Five, I wept. I wept in disbelief at the perfect coincidence. I wept because this book understood what I went through. I wept because my brain was like Dresden—completely destroyed.

Emotional memory stays with us forever. It’s why we remember only a few things from early childhood, but those things are charged with deep emotion. I think the best books enter our memory through our emotional experience, they then become the deepest memories of all. They change us.

How did you avoid the pitfalls of writing about your ethnicity, something writers of color are often told is the only thing they can be experts on?

My identity as a child of immigrants drives so much of my behavior and reactions to hardship. How could I leave that out? So I did not. I am also of Korean descent; being Korean American informs the way in which I navigate challenges, much like being British would possibly manifest in keeping that “stiff upper lip.” My Korean American identity makes it so I work twice as hard to achieve something, and I accept hardship as part of my life. Korean history is full of strife, and it is part of my own narrative too.

I actually had to ask to write about my ethnicity as part of my recovery process. My beloved editors were surprised I even asked. “Of course!” they said. I understand that when one reads a memoir about illness and recovery, one might expect a pure focus on the illness itself and not the context of identity. But in my case, identity was something that was affected by my stroke. And I’m glad my editors embraced that concept. Publishing is so “white,” that it’s not always a guarantee that I can bring that into my writing without argument.

In a beautiful, later section of the book, you describe a hike with your parents and brother. You combine these elements amazingly: the failure of your body to perform the hike easily, because of the hole in your heart; your parents chiding you and reminding you that hikes were necessary during times of war; you chiding yourself for being defective. The best line of the chapter comes courtesy of your mom, who tells you, “Sentimental people die.” This book is about survival. How did you decide how much you wanted to share, and explore, of your family’s past?

My family is amazing because they let me write about them, even if what I write isn’t wholly flattering. That said, I do set limits on what I write when it comes to nonfiction. My golden rule is that I write nothing that would hurt my daughter. So I was as kind as I could muster in my depiction of my ex who is, after all, her father.

My immediate family—my father, mother, and brother—have always been supportive of any way in which I depict them. They understand the life of a writer. They know I love them. They know that this is all part of my narrative as I have absorbed it. I’m very lucky in that way.

So in short: it wasn’t a decision. I pressed go.

Randa Jarrar ’s HIM, ME, MUHAMMAD ALI won the 2017 Story Prize Spotlight Award. Her debut novel, A MAP OF HOME, won the Hopwood Award, an Arab-American Book Award, and was named one of the best novels of 2008 by the Barnes and Noble Review. She grew up in Kuwait and Egypt, and moved to the United States in 1991, after the Gulf War. Her work has appeared in the New York Times Magazine, the Utne Reader, Salon.com, Guernica, the Rumpus, the Oxford American, Ploughshares, and more.
Tags: Christine Hyung-Oak Lee, Randa Jarrar, Slaughterhouse-Five, memoir, memory, stroke

The World Is Full of Paper. Write to Me.
Remembering Agha Shahid Ali, 12 years after his passing