An up-close and personal take on the hip-hop group’s love of kung fu. 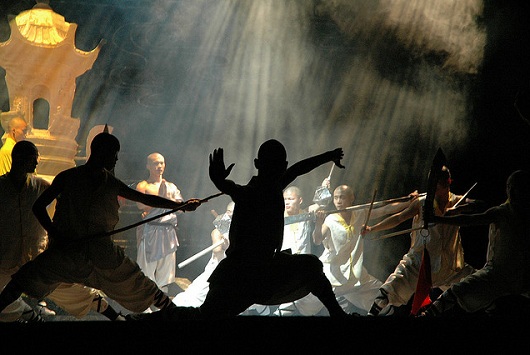 In 1992, a group of nine gentlemen from Staten Island issued an urgent warning to safeguard your nape, preserve your collar, or, as they bluntly put it: “protect ya neck!” As if their explosive styles and grimy beats weren’t convincing enough, RZA—the Abbot of our newfound temple—masterfully and lovingly blended in kung fu movie sound effects to kick down any doubting doors. In some ways, Enter the Wu-Tang: 36 Chambers was the original mashup; RZA brilliantly created this wondrous and gritty intersection of hip hop and martial arts, where MCs slaughtered at the side of Shaolin monks and slayed to the sounds of bullets in the head.

When I first heard the Wu-Tang Clan, I was doing A&R at Jive Records, where I had signed a group from Flatbush called the Fu-Shnickens, known for their kung fu aesthetic. I’ll never forget one of them saying to me, “Sophia, you’re Korean, but you never watched kung fu flicks?” It seemed like a ludicrous question. I was a second-generation Korean Canadian who lost her language and ate cheeseburgers while the rest of the family feasted on kalbi and banchan. In 1992, my racial and cultural denial was alive and thriving.

It wasn’t until I met Wu-Tang that what my brother laughingly refers to as my belated “Asian Renaissance” started. Once I met them, I watched The Killer—and it was an exalting ethnic epiphany. In the West, the sexual perception of Asians is diametrically opposed between genders: we women are exoticized, eroticized, and fetishized, whereas our men are ridiculed, minimized, and emasculated. So to see Chow Yun Fat up there—macho, sexy, hard as hell—was electrifying. Then came the kung fu flicks: Jet, Jackie, Donnie, and, of course, the ultimate gangster: Bruce.

RZA is not a casual observer of Asian culture. Or of any culture, for that matter. He has read countless books about kung fu, Buddhism, and Taoism. He used to carry The Zen Teaching Of Bodhidharma with him everywhere he went. I should know—I was the one responsible for getting him another copy every time he gave one away or lost one on the road.

And then he made the pilgrimage to the Temple itself.

I’ve always believed that part of my life’s mission is to bridge gaps. I introduced RZA to Quentin Tarantino, Harvey Weinstein, Donnie Yen, and 34th generation Shaolin monk Shi Yan Ming, a.k.a. my baby daddy. In 1999, Yan Ming and I led a group of students to Shaolin Temple, where RZA became the first-ever musician to perform in front of its hallowed red doors, a human chain of Shaolin monks creating a barrier around him. We then traveled for almost a day, straight to the mile-high Wu-Tang mountain, where the Abbot of the original Wu-Tang gave the re-imagined Abbot of Wu-Tang a gift of his Temple’s music. It was a beautiful exchange.

I maintain that RZA was single-handedly responsible for the world’s renewed interest in kung fu movies. Without Wu-Tang, Crouching Tiger, Hidden Dragon and Hero would not have met with the success they did. Wu-Tang made it cool to like kung fu movies. Their albums had kids and adults all over the world running to Chinatown to find the movies they sampled, cited, and referenced. This appropriation would have come across as maudlin and exploitative had Wu-Tang not embraced Asian culture with such tenacity, respect, and devotion.

A very early episode of Yo! MTV Raps demonstrates this devotion. Wu-Tang were guests on the show. During one of the commercial breaks, Ed Lover went off set, only to reappear in a blue karate gi with horn-rim glasses, a wig, and a broomstick handle. Every time one of the guys tried to make a point, Lover would interject in a faux “kung fu” accent, and it was clear that it was getting under the guys’ skin. Not only was he not listening, but he was also ridiculing the culture they so loved. Finally, Rae, in inimitable Chef fashion, said something like, “We take this serious—this isn’t fun and games to us. You do that again and we’ll fold you up like a wallet.”

Wu-Tang and kung fu together are a perfect example of things going around and coming around full-circle—like a windmill, as it’s called in b-boying, or, as it’s called in kung fu, Wulong Ziaozhu, which means Dark Dragon Coils Around Pillar. Wu-Tang consumed, digested, and assimilated kung fu with nothing but reverence. And the happy result was that they gave it back to the world in a magically mediated form.

In recent lectures, GZA has said that at first the Clan were drawn, as most of us are, to the action in the kung fu movies. But as they got older, they realized that it was more the themes of loyalty, brotherhood, and oppression that resonated deeply with them. When discussing this panel with him, GZA said something very simple and yet moving about kung fu movies: “We didn’t see them as foreign films.”

Sophia Chang has spent more than twenty years in the music business, working with Paul Simon, Atlantic Records, Jive Records, and the Wu-Tang Clan, and has expertise in many areas including management, marketing, publicity, and talent scouting. She has managed Ol’ Dirty Bastard (RIP), the RZA, Raphael Saadiq, and most recently, GZA. In addition to producing fashion shows for designer Vivienne Tam and Project Runway All Stars, she was an account executive at digital advertising agency, Sarkissian Mason. She is currently writing a screenplay for HBO.
Tags: Chow Yun Fat, RZA, Shaolin, Sophia Chang, Wu-Tang, kung fu

Keeping Tabs: A Critical Eye
This week's articles are about the current U.S. political climate–but don't worry, we have some new tunes for you to enjoy, too!