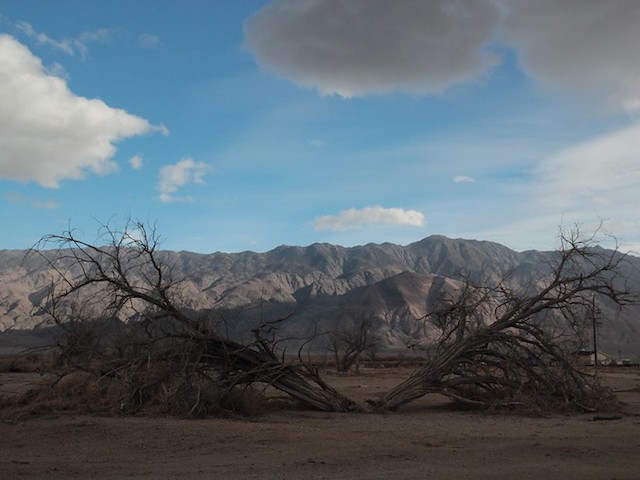 notes on the return

notes on the phrase shikata ga nai, written after a Colorado state representative says in 2017 that the internment camps were justified because “in the heat of battle there isn’t time to distinguish who is a citizen and who is not”, or: it cannot be helped.

I am so tired of talking about Manzanar.
Lord, let me talk about anything
else instead. The moon, the sea, even fucking flowers
I’d rather write than these desert stories muled as a kid,
old as black bile, a myth, America,
of your forgiveness, of what couldn’t be helped.

That phrase in rōmaji, it cannot be helped
engraved on stones they sell at the gift shops in Manzanar
alongside baseballs, tiddlywinks, tin American
planes with their tin tiny bombs, anything
a souvenir, a replica poster for the kids
saying where to go, hiding behind the “Japanese-style” flower

your fields promising red on your lips, your teeth. America,
I still whisper this poem. In your heart even the sakura
blooms for your old dead soldiers, everything
pink, everything brief. The Paiute lived here before Manzanar,
were removed,     and returned,           and helped
build too. You conscripted our dying to dig our graves. Each boy

giving their mute answer to the guards, each boy
saying yes     saying    no      no. Our traitors
fought for you, America. They just wanted to go home.
Where I’m from there’s no cherry trees, just dead wisteria
washed in drought. At Manzanar
I was a garden, I was a maid, I sold groceries, bled rabbits, all

blooms with a spade. I was your issei, your nisei, your sansei
I was your viper-hatched son.
Question: Hast thou gods before me? When have you prayed?
According to your survey, my Americanness is irrational.
They say you planted victory gardens
in our absence. They say you’ll let us return.

Great-uncle says the suffering helped, America.
He gave his kids his citizen pride. Today only flowers
bloom over his grave. He went blind too, after Manzanar.

James Fujinami Moore was born and raised in Los Angeles. His debut collection is forthcoming from Four Way Books in 2022, and his work has appeared or is forthcoming in Barrow Street’s 4×2, Guesthouse, The Margins, the Pacifica Literary Review, and Prelude. He has been a 2019 Poets House Emerging Poets Fellow and a 2019 Bread Loaf Work-Study Fellow, and received his MFA from Hunter College in 2016