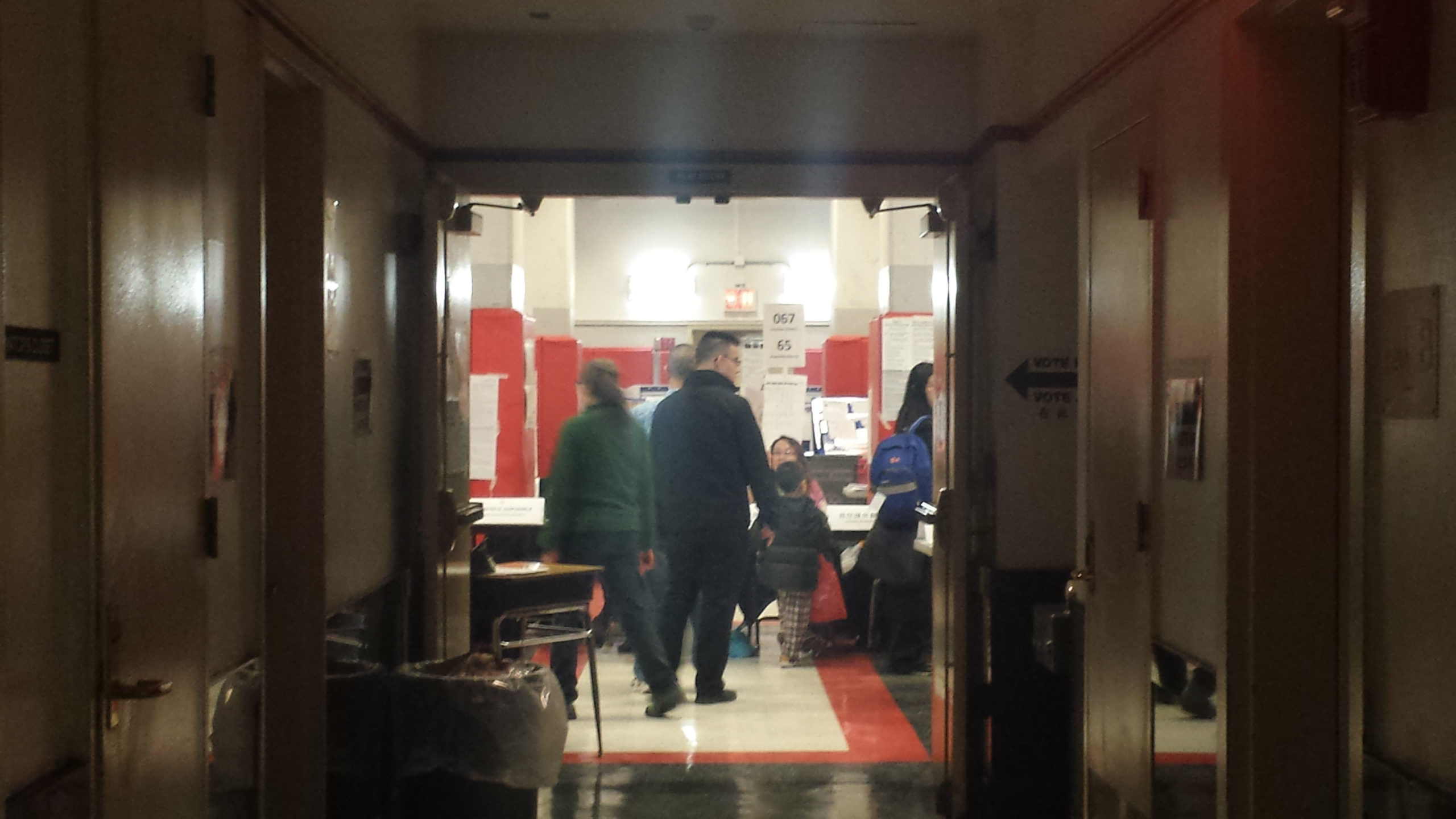 Pam Yam Cheung had been awake since four in the morning and sat at P.S. 130, the elementary school on Baxter Street. Her two sons are students there. But her kids were in their Chinatown apartment, asleep in their beds. It would be about five more hours before they arrived at the school, but they would not see their mother until 11 p.m.

Cheung has been a poll site interpreter for the past two years. As a mother, she is used to early mornings, but she was willing to start her long day even earlier to add even more hours to her day because she believes in the election process.

“Not many Asians vote, and we need to help everyone who show up to vote,” she said.

For poll site interpreters, door clerks and information clerks, the compensation is $200 for working on Election Day, $25 for attending a training class and passing the exam. There is a $35 bonus, given to those who attend the class, pass the exam and work two Election Days.

By the end of her shift, Cheung would have worked a 17-hour day.

“You don’t do this for the money,” said Cheung.

Asian-Americans seniors with limited English proficiency have the greatest difficulties at the poll sites.

The process of becoming an interpreter is laborious. Poll site workers must attend a mandatory six-hour training class. Following the training course, all applicants must pass an exam to be assigned to work on Election Day.

A freelance paralegal, Cheung said she especially wanted to help Chinatown’s seniors. She said seniors, particularly Asian-Americans seniors with limited English proficiency, have the greatest difficulties at the poll sites, which in some cases discourages them from voting.

Cheung pointed out several obstacles for voters not fluent in English: mistranslated materials, being unfamiliar with the voting process, and missing or misspelled names in the voting rolls.

One voter who asked to be identified only as Ms. Choy recalled a time that a poll site worker made fun of her name, mocking it in a funny voice.

The law requires that voting be made accessible to citizens regardless of their English fluency. But the Asian American Legal Defense and Education Fund (AALDEF), a national advocacy group that works to protect and promote the civil rights of Asian Americans, found that poll sites often fall far short of this standard. The group’s voter exit surveys found that mandatory bilingual ballots, translated voting materials and interpreters were often misplaced or not visibly displayed.

Glenn Magpantay, a director at AALDEF, talked about visiting a poll site in Flushing, Queens. He recalled seeing that a volunteer had put out a “VOTE HERE” sign in Korean but not in Chinese, although Cantonese, along with Korean, is one of the two most common languages spoken in the area. When he asked where the signs and ballots in Chinese were, the poll worker pointed to the Korean sign and asked “Aren’t they the same?”

When asked where the signs and ballots in Chinese were, the poll worker pointed to the Korean sign and asked “Aren’t they the same?”

This slip-up is typical of the inadequate access often found in many polling districts with large Asian American populations. This led AALDEF to conduct multilingual exit polls to monitor and report voting barriers. The surveys have found that language issues are key to access as more than one of three Asian American voters surveyed reported they had a limited English proficiency.

Chan Guo-Yan is one of these independent voters, and she is committed to exercising her right to vote. She became a naturalized citizen in 2007 and was going to the polls for the second time. “I am a health worker and we have union representation but I want my own choices. That is my freedom in America,” Chan said.

But the materials at her polling place were not conducive to helping her carry out her choice. She said her limited English made it difficult to understand the options, particularly given the two initiatives on the ballot this year. She found the translated ballots in Chinese to be unhelpful.

One way that many families circumvent these difficulties is by bringing their children or grandchildren in tow, as personal interpreters. For example, the three generations of the Lee family arrived at the polling site together. Jenny, 18, came to vote with her her mother and grandmother.

Three generations of the Lee family arrived at the polling site together.

Jenny admitted she was not as well-informed about politics as her mom, a full-time waitress who wanted to vote on the Working Families Party line to support their push for restaurant workers to receive benefits. Jenny’s grandmother was also a waitress for many years before she retired.

Jenny’s mom was the one who pushed for the three to make the late evening trek to the elementary school to cast their votes.

“My family works very hard so I don’t have to, and I can focus on my schoolwork,” said Jenny.

The Lees were among the last voters to leave the polling site, at a quarter to nine. Mrs. Lee had only left work thirty minutes prior, and stopped at home to pick up her mother and daughter. None of them had yet eaten dinner and Jenny still had homework to finish.

When nine o’clock, poll closing time, struck, the poll workers started dismantling the voting stations in a symphony of table folding and chair stacking that lasted another hour or so. Add to that, the sound of peeling masking tape as the poll site interpreters removed the ‘Vote Here’ signs in multiple languages.

Cheung yawned and lightly massaged her kneecaps. The excessive heat of the school’s gymnasium made it harder to stay awake to the end. She checked messages on her phone. Her husband had left a voicemail. The children had gone to bed.

Outside P.S. 130, on the quiet street, a young man who appeared to be in his mid-20’s waited for his mother, another poll site interpreter. When informed it would most likely take another hour before she could leave, he said it’s okay, I can wait. He then walked back to stand under the dim street lamp.

Pearly Huang is an Open City fellow covering Manhattan Chinatown, Brooklyn’s Sunset Park and Flushing in Queens. She is a first-generation Chinese-American, and was among the founding and reporting staff for OurChinatown, a hyperlocal community blog.