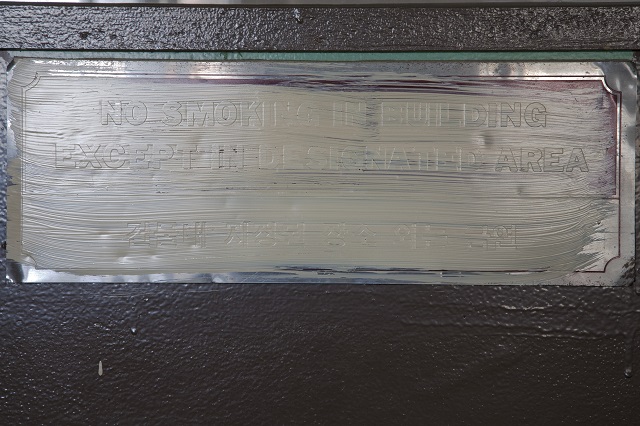 For all that they are heavily policed and debated, it’s easy to forget that borders are imaginary lines. That said, their consequences can be all too real, particularly when we get caught on the wrong side of them. In this story, a residue of past conflict leaves the narrator unable to return to her hometown.

Returning Home In My Own Way
by Park Wan-suh, translated by Mark L. Keats and Esul Park

My parents are from the north of the truce line, the 38th parallel that marks the border between North and South Korea, and my in-laws never let me forget that they were natives of Seoul and had never lived away from their ancestors, never lived beyond the Four Great Gates that mark the entryway to the capital. Whenever the holidays come, I have no hometown to return to. However, this year is a little better. While I watched the heavy traffic caused by Chuseok, or Korean Thanksgiving, on TV, from the pit of my stomach, I felt relieved that there was no place to return to. I used to give myself credit for my children much the way a beggar father told his story: A homeless person saw another house and burned with laughter. Then he said, “What greatness because you don’t have a house, so you don’t need to worry about a fire. You should be thankful to me.”

One time in the backyard, the trees were so full that they seemed to cover the sky, but even a small wind would drop their leaves to the ground. Nobody can stop things if they want to go back to their roots. Even though a person’s hometown is not in the countryside—a place that allows people to walk upon the earth—people come to be at ease mentally when they, in an act of duty, briefly visit their aging relatives. Because I’m old enough to be the most elderly person among my relatives, I just sit down to welcome my children or grandchildren. But I still feel a sense of frustration, as if I do not do what’s right. No, that’s not the right thing to say; it’s a kind of longing. How the fallen leaves fly blissfully and buoyantly—such an act of Providence.

It’s easy to tell my age because I don’t have anyone older than me whom I have to show the proper respect to. Like autumn, does my old age reveal the loneliness of being unable to return home, or the emptiness of not having older relatives who would gently touch the top of my head? I visited graves twice this year at Chuseok instead of the usual one time. I visited with my entire family for the purpose of cutting the weeds around the grave. After a few days, I wanted to go alone, but because it’s a place you need a car to get to, I always needed a driver. It’s in the cemetery park owned by the Catholic Church where my husband and son are buried. I know why I could come alone. Even though a few years have gone by since they passed away, whenever I visited, I felt as if my heart had been wounded. But now, I feel warmth in my heart, and I take some deep comfort. Because it’s on high ground, it commands a fine view. It’s not a mountaintop, but a valley. So, I like that it is cozy like my hometown and a small, simple tombstone. My name and birthday are also carved on the tombstone. Only the day I die is missing. After my death, my children will not need to contemplate a big tombstone or beautiful epitaph. Here is a cemetery where tombstones aren’t decorated ostentatiously. However, the fact that the former Archbishop of Korea, Kim Su-hwan’s grave, which has a little bit bigger burial mound and tombstone than ours, is not that far from us is a comfort in the afterlife. But I’m worried about going down the long, steep road to the grave. During the funeral procession if the pallbearers dropped the coffin, the mourners might be frightened out of their senses because they might think that the dead suddenly came back to life. That might be my last joke to this world. Instead of small talk and jokes, what deeds can I leave for posterity?

Roughly ten years ago, the late ex-president of Hyundai, Jung Ju-young, visited his hometown for the first time, crossing the truce line with a herd of cattle. I was very impressed at this historic sight, but I didn’t want to be overly excited, so I wrote the following:

President Jung returned to his hometown beautifully, but I wish to go to my hometown in my own way. I want to take a local train to Kaesong. I, by myself, want to cross a small hill and go for a stroll on a large plain, and if I’m lucky, I would like to hitch a ride with a passing cart pulled by a cow. I would like to enter into the outskirts of a village without any welcome or attention, but not in a shabby or an unusual way. I don’t care what season it is; I only care about the time. I would like to reconcile the impasse of my life, so I would feel very happy if it is around the time of a sunset, because that time would cause the brilliance that exposes the cruelty of changes and dilapidated things and circumstance to disappear from my wrinkled face. Even though everything in my memory disappears in vain, I would be happy if somebody sees my face, which is clearly old now, and is reminded of a time when I was young and sitting on the front porch.

Jung Ju-young was able to establish some sense of a relationship between the North and South, which then allowed the Kumkang Mountain and Kaesong tours to happen. Though I visited Kumkang Mountain, I felt some hesitancy about the Kaesong tour. How can I tour Kaesong while setting aside my hometown, the place where my family burial ground is merely a few kilometers away? When I received the invitation for a Kaesong trip, I told them my wish: I would like to visit Pakcheokgol, my birthplace, alone from the group. But it didn’t happen.

In retrospect, the world that I have lived in consists of lots of things that I couldn’t understand from my age: knowledge, love, common sense.

Park Wan-suh was a South Korean writer born in North Korea whose first book, The Naked Tree, was published in 1970 when she was 40. Highly respected and the winner of numerous literary awards in Korea such as the Korean National Literature Award and the Yi Sang Literary Award, she has also written many other short stories and novels. Her most recently translated work, Who Ate Up All the Shinga, has sold 1.5 million copies in Korea.

Mark L. Keats was adopted from South Korea at the age of three. He earned his MFA in fiction from the University of Maryland and is the recipient of a Kundiman Fellowship. His work has appeared or is forthcoming in Pithead Chapel, Waxwing, The Offing, Smokelong Quarterly, and others. Additionally, with Esul Park, he is translating Park Wan-suh's last collection of essays tentatively called The Road Not Taken Is More Beautiful. He is currently a PhD candidate in English and Creative Writing at Texas Tech University.

Esul Park is a native South Korean and completed her Masters degree in the College of Media & Communication at Texas Tech University. Before coming to the US, she worked as a researcher at governmental affiliates for the Ministry of Culture, Sport, and Tourism for the South Korean government. She has translated official reports for English speaking countries such as the US, England, and Australia. She is currently a PhD student in Media and Communication at Temple University.

The Transpacific Literary Project is a platform for writing from across East and Southeast Asia. Read work from our most recent project folio, Residue

Kim Hyesoon: Two Poems
How scared God must have been / when the woman who ate all the fruit of the tree he’d planted / was cutting out each red body from / between her legs

Bei Dao’s Books in the Attic
Suppressed sexual violence in the name of revolution lay in the abyss of our consciousness.