Read these books by South Asian writers that wrestle with established forms, narratives, and structures. 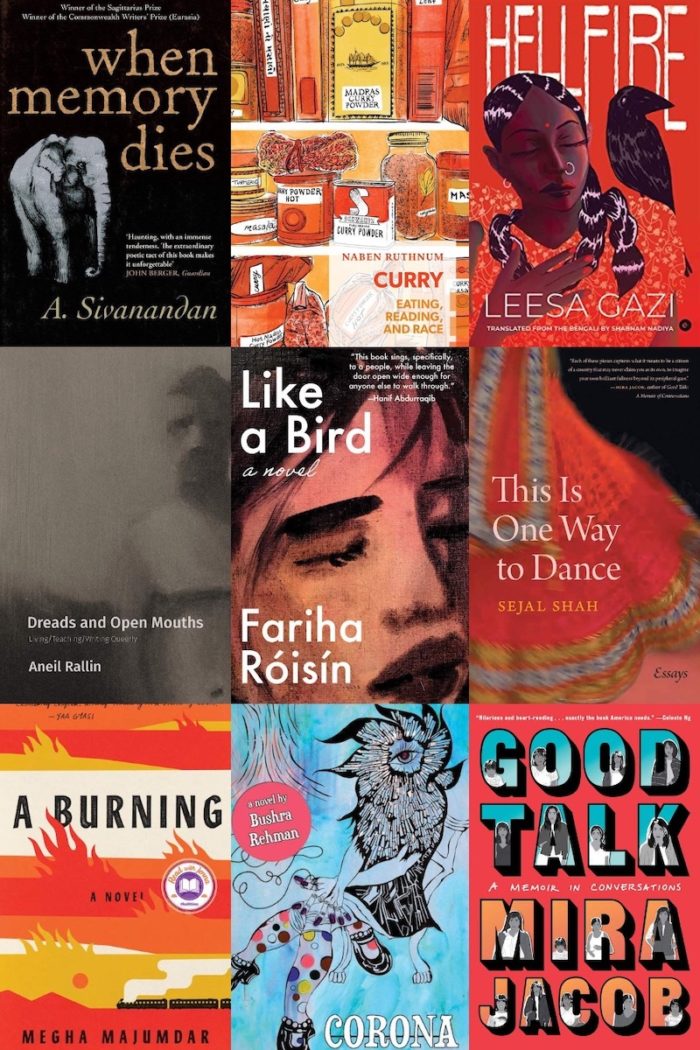 The South Asian Avant-Garde (SAAG) Anthology is an online multimodal publication of art and writing that champions dissident, radical, and experimental work, thought, and discourse from across the subcontinent and its global diasporas.

We asked some of SAAG’s senior editors to share a few of their choice reads—books that expand our thinking about what is South Asian political identity and being, and wrestle with established forms, narratives, and structures.

Help support SAAG and their effort to fairly compensate all writers and artists they publish. Donate here.

This Is One Way to Dance by Sejal Shah (University of Georgia Press, 2020)

The most beautiful thing about Sejal Shah’s collection of essays is the poise with which she glides through form, through experience of dislocation and otherness, through familiar things made entirely new because of the way they are rendered. The essays track the makings of a writer in motion, her movement through time and place, the arc of her identity, of being seen and unseen. Filled with all the richness of lives that intersect with hers, these stories, these moments lay open questions of culture, race, gender, of scars and celebrations, and what it looks like to dance between them all.

When Memory Dies by A. Sivanandan (Arcadia Books, 2007)

This is a family saga telling the history of Sri Lanka through three generations, all of whom grapple with a range of personal, political, and ethical issues. The novel starts during the time of colonization and ends closer to modern day, at the height of ethnic conflict in the country. I felt like I was diving into a deeply intimate tale in which the country was its own character, as much as the actual family at the heart of the story. Much of the story is told from a Tamilian perspective, and each section is punctuated by horrific tragedy. But from the first to the last line, the author uses setting to such a powerful effect that I found myself imagining each scene in my mind’s eye, reflecting on each character’s insecurity and pain, and rereading sentences because I couldn’t recover from the images the author painted. This book carries an entire world on its shoulders, which is no small feat.

A political fiction set in present-day India, A Burning is set against the backdrop of a terrorist attack in a train station in India. Jivan, a young Muslim woman who watched the attack unfold, is imprisoned as a suspect after her viral Facebook post. PT Sir, Jivan’s former school teacher who is suddenly thrust into the world of politics has the power to decide Jivan’s fate. Lovely, a transgender actress and Jivan’s English student, is called in as Jivan’s character witness. Deeply urgent, poignantly funny, and incredibly textured, Megha Majumdar’s debut book transports us to India with intimate and vibrant portrayals of the roads, the people, and the food, portraying with stunning poeticism how power motivates people, how the inherent hierarchy of the society keeps people in check, and how the arbitrariness of life questions meaning of one’s choices. If you know India, this book will remind you how much things have changed, and if you don’t, this book will show you a glimpse into the wildly nuanced country.

Mira Jacob’s graphic memoir Good Talk uses paper doll illustrations superimposed on photographs, and interleaved speech bubbles that are alternately heartbreaking, funny, vulnerable, and real. There’s a large cast of characters ranging from Jacob’s extended family in India to her immediate family in New Mexico to friends in New York City. What starts out as a series of conversations with her young inquisitive biracial son (Jacob’s partner is a white Jewish man) turns into deeply considered treatises on family, race, intimacy, parenthood, gender, writing, and politics.

Jacob brings a fresh and funny perspective to even tried-and-true situations like the Asian-parent/American-child dynamic or arranged versus love marriages. Like in her first book, The Sleepwalker’s Guide to Dancing, much of the humor is in how she presents it—in a quicksilver conversational banter. She is also a master at making a point through everything left unsaid. Some of my favorite (yet painful) scenes were the ones between Jacob and her husband, about race and gender and the gas lighting and miscommunications that are inevitable in an interracial relationship in a white supremacist patriarchal world.

Hellfire is British Bangladeshi author and filmmaker Leesa Gazi’s first novel, translated into English by Shabnam Nadiya. Set in a middle-class family in Dhaka around the turn of the century, Hellfire tells the story of an all-controlling mother, Farida Khanam and her two adult daughters, Lovely and Beauty, who have effectively been imprisoned in their home their whole lives. Gazi takes on what Egyptian writer and activist Mona Eltahawy calls the foot soldiers of patriarchy: the women who enact and enable these oppressive norms. One of the most compelling parts of Hellfire for me was its frank treatment of sexuality. It’s rare that masturbation and sex are written about, especially in literary works, but Gazi crosses these boundaries and refreshingly, without euphemism. What’s even more astonishing is how, despite the pervasive shame around these acts, they seem normalized from Lovely’s perspective. Hellfire sets us squarely inside the stories of women—women whose lives and ambitions have been curtailed to the point of instability, meaninglessness, and violence.

The queer brown body is explored as a site of pleasure, fear, power, scrutiny, control, change, censorship in these pages. The body is an unruly beloved. The body is painted with a secret, the body is pleasured, the body obsesses over language. The body “comes into being in relation to other bodies’ and ‘words become flesh, flesh become words.” To celebrate the authentic, unruly, desirous body when the body is expected to conform, perform, and whittle itself away is a revolutionary, transformative endeavor.

One of my most recommended reads of recent years has been this monograph from Canadian Mauritian writer Naben Ruthnum (who also publishes under his mystery nome-de-plume Nathan Ripley). The book, part critical study, part personal memoir, part cookbook, part travelogue, is split into three sections as outlined in the title, where Ruthnum first waxes about his experiences with eating and cooking South Indian dishes, and muses on the sphinx-like nature of curry, the dish that is at once synonymous with South Asia and yet, is in many ways an amalgam of what South Asia is. From there, in “Reading,” he extends the metaphor to literature by discussing “currybooks,” the globally fragrant genre with titles and covers featuring mangos, saris, monsoons, and flowers and onward to “Race,” examining recent films, art, and writing. While short and quick, Curry packs a punch with accessible but smart critiques on how we create and must continually interrogate South Asian narratives, and the index provides a treasure-trove list of texts that’s a commendable syllabus for anyone looking to craft a course on modern South Asia.

Like a Bird is writer and poet Fariha Róisín’s debut novel and the culmination of an 18-year-long project she began at the age of twelve. The coming-of-age story centers on Taylia Chatterjee, who experienced childhood in the shadow of her older and lighter-skinned sister, deemed more beautiful and given more love. After a traumatic sexual assault, Taylia is forced out by her family, and in disparate nooks of New York City she finds a network of women who have faced the various trials of life and survived. Róisín’s writing is frank and contemporary. She defies tropes, allowing Taylia to explore her sexuality openly, challenging the narratives that women don’t have to be defined by their assaults. In the process, she queers our understanding of love. Romance, as Taylia discovers, is insufficient and flawed. In her community of friends, built through their leaning on and holding each other up, she finds the love that heals and allows her to soar. Like a Bird is a story of survival, community, and forgiveness of oneself, one’s family, and one’s past.

Nearly ten years after its publication, Bushra Rehman’s novel-in-stories remains a remarkable and innovative portrait of Desi life. At the center is the protagonist Razia Mirza, a young Pakistani woman navigating the precarious identity politics of a post-9/11 America. Through the course of the elliptical and episodic narrative, Razia simultaneously attempts to break away from the rigor of her upbringing and assert herself as a woman and a Muslim in a culture that directs hostility at both. In one story, Razia and her friend hitchhike only to find themselves trapped in a car with two over-sexed missionaries. In another, she endures life in a squalid apartment with a jobless boyfriend she loves mainly because her family doesn’t want her to be with him. The result is a picaresque that places Razia in potentially terrible situations to which she applies her considerable wit and intelligence—often to comic effect.

I reviewed Corona in 2016 after a friend told me that he thought it was a cult classic—and it’s a book that has stayed with me ever since. That Rehman finds so much profundity and depth in what, on the surface at least, appears to be youthful carelessness is what makes this book truly groundbreaking, and keeps one revisiting it over and over to dig deeper.