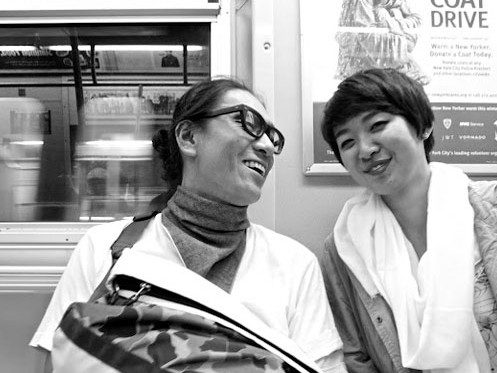 On my way home on the N train, as I reviewed photographs I’d taken earlier that afternoon of the Feast of Saint Anthony parade in Little Italy, I noticed a man and woman a few feet away sitting in quiet bonhomie. Without waiting for my shyness to kick in, I interrupted their privacy.

wmc: What do you do?

SQ: I’m a writer and an art critic.

KK: Just that once.

KK: Just that once.

I saw the model in Kota but refrained from staring. Instead, I explained my task to them—to collect an assortment of “Perfect Stranger” interviews for Open City—and asked them to ignore me while I took their photographs. I fumbled, as I always do, with my camera settings. Then I found myself squeezing Serena’s bare knee. She has a soft knee, and my affection was immediate and genuine; we are affectionate with those we are curious about, after all. I asked if a stranger touching her knee was all right. She said, “Yes, it’s just fine,” and took out a book—Haruki Murakami’s Dance Dance Dance, which she was reading for the second time. 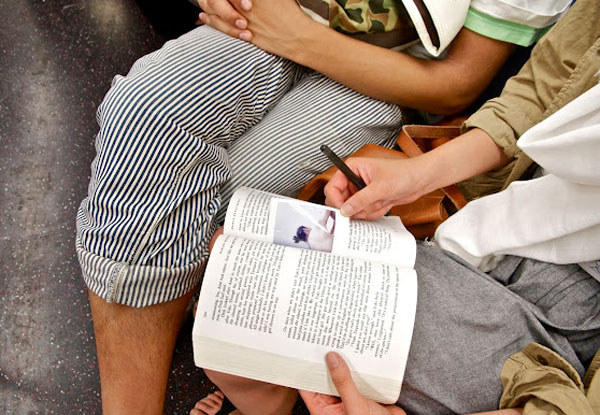 Later, I perused Serena’s thoughtful blog, Q: Art & Theory, and found two posts that elevated my affection to ecstasy: one, written for Printed Matter, presents synopses on Walter Benjamin’s shorter autobiographical pieces; and the other, written for Valentin Y. Mudimbe, is a commentary on John Berger’s curation of material by the photographer Jean Mohr, wherein the “power of [Berger’s] critique [of Mohr] is nested in [a] false linearity, in the arbitrariness of sequence.” Sequencing, or anti-sequencing, is a tricky art form, and Benjamin’s arcadic flâneur-isms and Berger’s enthusiastic asides and gentle narrations serve to remind us just why and how we experience our cities in such specifically nonlinear ways.

Later still, Serena would tell me, “I haven’t found a way to permanently leave New York, though I haven’t figured out why (and am not sure) I would want to.”

wmc: How did you two meet?

SQ: We used to work for companies that shared an office, and we sat twenty feet apart. I think maybe we met my first day there, and then proceeded not to speak for months.

wmc: Kota, which magazine had you modeled for?

KK: Esquire, last September—with Ryan Gosling (twice) on the cover. It was some feature on the double-breasted suit.

wmc: What draws to you to patterned life?

KK: “Patterned life?” I’m not sure what you mean. Patterned or repetitive life is not very appealing to me.

wmc: My bad! I’d made an assumption about how a graphic designer may connect with his environment. Let me ask, then: How do you relate to patterns in your surroundings?

KK: I enjoy seeing patterns, or repetitive visual compositions, but I relate more to patterns of people’s behavior. I think about what people do and why they do it. There is some sort of truth to such patterns. Sometimes I can apply this truth to what I do, though most of the time it doesn’t do jack shit. Put simply, people and their behavior inspire me. 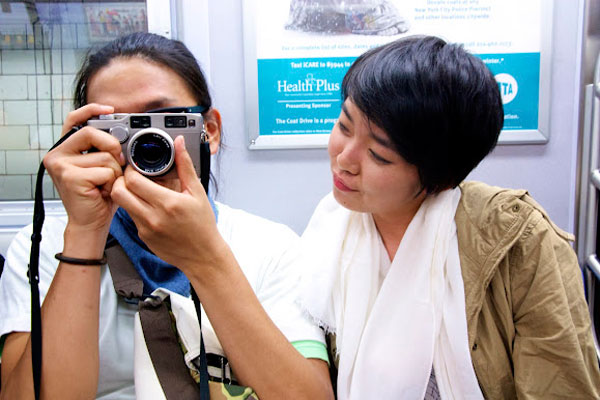 wmc: Serena, I see you’re reading Dance Dance Dance. I find Murakami’s flat affect jarring. In fact, a friend once said to me, “You and Murakami would be enemies.”

SQ: Try reading The Elephant Vanishes; the short stories prime you with his way of thinking. It’s a nice entry point because it is the more raw and somewhat more delicately crafted base material he builds his fantastical cities of novels upon. I actually think he is a better short-form writer than novelist.

The Wind-Up Bird Chronicle is one of his best pieces and very difficult to read. Here might be a fun way to read it: Watch Wong Kar-wai’s In the Mood for Love just before you start the book, and then when you know you’re coming to the end, queue up 2046 to watch immediately following the last sentence. Those films were the open and close parentheses of the book for me the second time I read it, and it made a tremendous difference.

I believe in talking people into books, especially Murakami. I get into this argument with my father all the time; as a very old-school lit nerd, he doesn’t believe in anything but naturalism in novels.

wmc: My parents are non-narrative-driven, uninterested in remembering or revealing much about themselves; they live in the present. What is your own parents’ relationship to narrative?

SQ: My father is a word-loving man across languages and is delighted that I’ve taken up the same tools. He’s hiding his novel somewhere beneath his poetry beneath his translation work. My mother has a generous and childlike affection for consuming narrative in all its forms and is a great re-teller of tales. Between them, I have heard many fantastical and earnestly honest stories, but unfortunately I have a terrible memory and have not written any of them down.

wmc: I told my friend I was an em dash, and she told me she was a question mark; then we started talking about revolutionary commas. What punctuation mark are you?

KK: I dig exclamation points. I love the moment when I get a good idea. Those moments are represented with exclamation marks.

SQ: I would have said em dash, too, but you and Emily Dickinson have that covered. I would say, then, that I’m a semicolon, indefinite soft stops between serial and separate thoughts. Also, I want to misquote Kurt Vonnegut when he said that the use of semicolons is completely unnecessary and only signify that one has attended a liberal university. 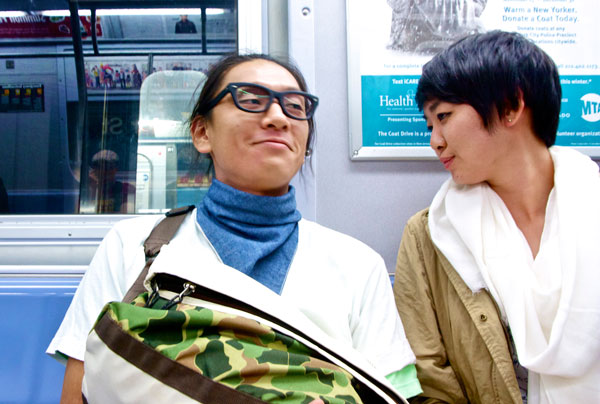 wmc: Where were the both of you born, if not New York City?

KK: I was born in Toyohashi, Japan, and moved to the States when I was fifteen. Now I live in Park Slope, a nice neighborhood in the process of gentrification.

SQ: Beijing. I have very few memories of China from then, but the ones I do have are very vivid—and of course I can’t trust them. I just moved to Prospect Heights. I’m still getting acquainted, but today I finished unpacking and found the neighborhood bookshop.

SQ: I’m trying to get the answers to both those questions to converge. Come back to me in a bit.

Wah-Ming Chang has received grants for fiction from the New York Foundation for the Arts, the Urban Artist Initiative, the Bronx Writers’ Center, and the Saltonstall Foundation for the Arts. Her fiction has been nominated for a Pushcart Prize, and has appeared in Mississippi Review, Arts & Letters Journal of Contemporary Culture, Kartika Review, and Swarm Quarterly; her nonfiction in Words without Borders and Open City, an online magazine published by the Asian American Writers’ Workshop; and her photography in Open City, Drunken Boat, and the New York Times. She is the managing editor of Melville House.