Food roots us in a place. It follows that ingredients—and the spaces in which we find them—do the same. 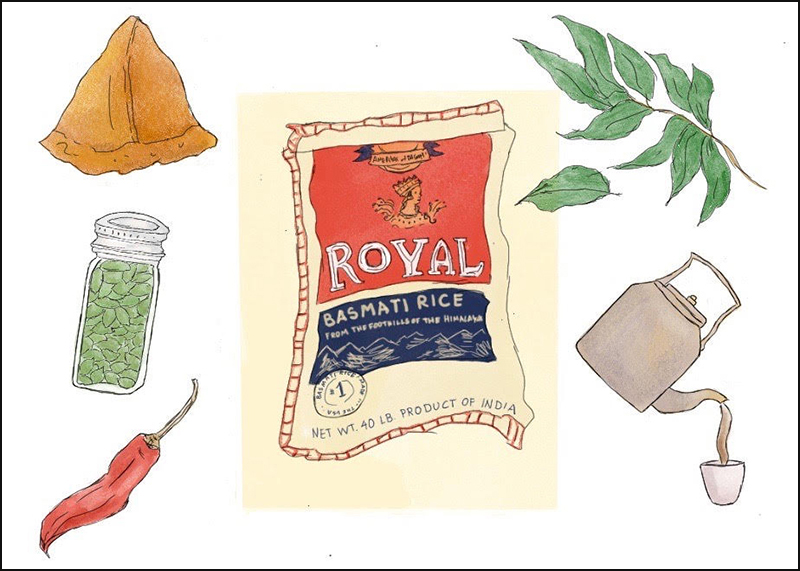 After arriving in Brooklyn six years ago I wheedled my mother into sending me tiny vials of spices with relatives visiting from California. I was wary of masalas in the ethnic aisle of my Crown Heights corner store; obtaining cardamom pods from Whole Foods felt equally off-putting.

But eventually I grew tired of waiting to use asafoetida until it had been smuggled in a baby food jar through the San Francisco airport. If I wanted to walk in somewhere and easily pick out everything I needed for daal or saag paneer, the time had come to find an Indian grocery store.

My brother moved to the East Village soon after this revelation, and I began to frequent Dual Speciality, the grocery he turned to for lentils and chili powder. It was well-stocked given its sliver-of-Manhattan size, but I often left feeling that something was missing.

It lacked the frenetic vibrancy and distinctive produce of the Indian stores of my childhood. I grew up in Silicon Valley, where South Asian groceries sprout in the suburbs like saffron poppies. My mother would take me on grocery runs so I could save her a spot in the free-for-all that passed for a checkout line; I went for the fresh samosas. Until I left the Bay Area for college, this after-school transaction at India Cash-N-Carry was a fixture of my life.

What expedition can begin without a call to one’s mother? Before embarking, I rang up mine to ask about her own experience with the Indian stores of America. My mother mused about the necessary trappings: Indian eggplants, curry leaves, whole coconuts, mustard seeds. And, of course, “the chaos:” cashiers chatting away on cell phones; Bollywood music piped in overhead; a sense of low-grade bedlam. It’s a place that reminds you of India, she told me with the fondness and exasperation that inevitably braid when immigrants speak of their homeland.

My mother lived in New Hampshire when she first immigrated. The closest Indian grocery was in Massachusetts, and the trip there was an occasional weekend voyage she and my father would make to get nonperishable items. As a young bride she wrote home about recipes that swapped out Indian vegetables for broccoli, carrots, and cabbage.

If I lived in Alaska or Idaho I would accept whatever ingredients and grocery stores were available to me. Any port in a storm, any kadda in a foreign land. But in New York City, I knew that there had to be a way to find something closer to the grocery experience I remembered.

The best way to find an immigrant grocery is to ask other immigrants, but I knew few other Indians in the city. I combed through Yelp and solicited suggestions on Facebook. The internet’s results were more amusing than fruitful, prone to an air of benevolent exoticization; one commentor’s high praise described a store that was “like that scene in the Sex and the City movie when Carrie and her friends walk through the spice market.”

Also helpful was a review of New Foods of India in Murray Hill: “if you love all things Indian you need to visit this place.”

Eventually, I produced a list of promising options. Many of the grocery stores on my list were clustered in Murray Hill, the midtown Manhattan neighborhood also known as “Curry Hill,” nicknamed for its Indian restaurants rather than its residents. Groceries clustered together along Lexington Ave. I wandered aimlessly through stores roughly the width of a hotel hallway. The offerings were limited, but I could see many of the markers I recognized: Indian sweets in a display shelf, clay lamps in different colors, jars of mango and lime pickles.

Kalyustan’s, located in the middle of the cluster, was an entirely different beast: carpeted, air conditioned, bright, and clean. Jalebis, a popular Indian sweet, were marketed as “honey pretzels.” (When I reported this to my mother over the phone I had to wait as she laughed for a long, raucous moment.) It felt like an upscale import store—the kind of place where, in a foreign country, you might find Oreos and ketchup. It was too tidy, too quiet, too polite.

To evoke the suburban stores of my youth, I would need to locate something with more space—and more Indians. Ethnic groceries shape and are shaped by their immigrant populations. Indian stores in America are thus something of a pan-Indian experience: the Malayalis need grated coconut, the Rajasthanis want sangri beans. In India, a cousin once observed, you would be hard pressed to find such variety under one roof.

It made sense, then, that what I couldn’t find in Manhattan was alive and well in Queens. Jackson Heights has been home to New York City’s Little India since the 1970s, and I couldn’t venture down a block without running into an Indian grocery. Produce here was overflowing from bins and I finally found ready-to-eat samosas. Aunties bustled to and fro and lines were taken as suggestion more than imperative. While reaching for wholesale paprika inside Patel Brothers, I heard a woman muttering to her husband in Malayalam, the language spoken only in my parents’ native state.

I had finally reached the front of the checkout line when a man wearing an American flag shirt sidled up to the counter. He produced a styrofoam cup and offered it to the cashier before pouring steaming chai from a silver teapot. It gleamed as I watched the tableaux unfold; as the men ignored me, the rest of the line, the passage of time. The cashier casually took a swig, and the chaiwallah moved on to the next worker down the aisle.

But Jackson Heights was a complicated trek from my Brooklyn neighborhood. As I tried to cart bags of spices, samosas, lentils, and paneer through two subway legs, the distance might as well have been from New Hampshire to Massachusetts. Ordering online would be the simplest solution, but being able to enter a grocery store and run my hands over tiny green chilies or smell flat bags of curry leaves is its own kind of transportive convenience. It’s easier and cheaper than booking a flight home to California or Kerala: to try and see my mother or my grandmotherland.

I asked my mother what she would have done if we had stayed in New Hampshire; if her life had left her without easy access to an Indian store. But she saw the store more as a portent than a necessity. Its absence would have indicated the lack of an Indian community. “That influence would have started permeating,” she said. Without an Indian community she wouldn’t have made Indian friends; Indian dishes that may have gone uncooked were almost a secondary concern.

“It’s never just a trip to the grocery store,” she told me. “You think of recipes you wouldn’t normally think of because the ingredients are all around you. It’s a place to connect with previous experiences.” Indian cooking begs for a crowded spice cabinet: turmeric, cumin, fennel, cinnamon, garam malasa. Tiny black mustard seeds that smack of faith and sputter when you drop them into hot oil at the right time. Food roots us in a place. It follows that ingredients—and the spaces in which we find them—do the same.

It would be another few years before an Indian-American friend who lived in Brooklyn tipped me off to Alive Herbals, a halal grocery store in Bed-Stuy. It’s a close cousin of Dual Specialty, lacking both the vitality and the chaos of Patel Brothers. But by then, other elements of the city had begun to feed whatever part of me had yearned for discord in the spice aisles. New York already felt enough like home.

To my parents’ chagrin, it’s still rare for me to make Indian dishes for myself. The only explanation I can coax from my subconscious is that it’s a sad affair to make dishes for one person that have always been intended to feed at least three.

Instead, I turn to Indian food to feed the people I love. Biriyanis are a dinner party staple. This past Easter, I made appams for the first time. They’re a Kerala specialty: spongy doilies with crisp edges and pillowy centers, made of yeast, rice, and various parts of a coconut.

My mother had fretted about whether I would be able to find idili rice in Brooklyn—I couldn’t remember seeing it in Alive Herbals. We devised a complicated series of workarounds, including one that had me stow a tiny bottle of cream of wheat in my carry-on suitcase. But when I walked into the store, the rice was sitting smugly on a shelf.

I served my guests appams alongside an egg curry laced with the unmistakable tang of curry leaves. The leaves, picked who-knows-when and tucked into plastic, were a far cry from those planted in the loam of Kerala or the terra cotta pot in my mother’s garden, where they grow jealously tended. But I, too, am an ocean and a heartland removed. The leaves were where I needed them to be; they were exactly what I needed.

Teresa Mathew is a writer, photojournalist, and illustrator based in Brooklyn. She presently works as a fact-checker at the New Yorker. Her photography and writing—primarily focused on religion, immigration, and criminal justice—have appeared in Buzzfeed Reader, the Atlantic, and the New York Times. Teresa is a 2021 Open City Fellow. 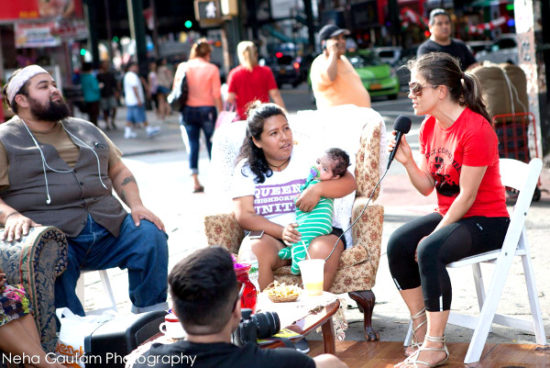 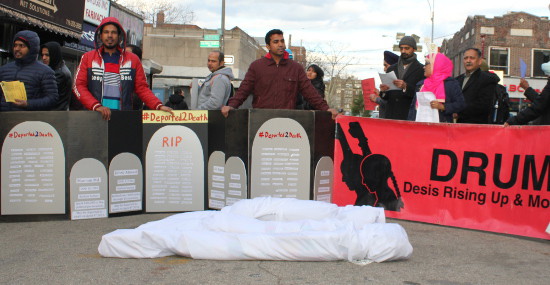 The Fight to Not Be #Deported2Death
One former detainee brings to light the struggle of many asylum?seekers who are languishing in detention centers and facing deadly deportation to the countries they fled from.