Iranian American novelist Porochista Khakpour says she wrote two novels by the time she was 12 years old. She’s never wanted to be anything but a writer. Her debut novel, Sons and Other Flammable Objects, was published to wide critical acclaim in 2007, and her second novel, The Last Illusion, out from Bloomsbury next May, is all about being an outsider. The novel is inspired, she writes in an essay for The Poetry Foundation, by a story from the Persian epic poem The Shahnameh/Book of Kings in which a boy born into a royal family is abandoned at birth because of his appearance. He’s adopted by a mythical bird, who raises him, and goes on to become a famous Persian warrior.

Khakpour talks about alternative coming of age stories with Yang-Sze Choo, Justin Torres, and Wah-Ming Chang tomorrow at Page Turner. In the meantime, we tracked her down for our weekly Q&A series, Studio Visit.

What’s on your nightstand now?
Student work, several unread New Yorkers, a book I must blurb, my friend Sharifa’s book Harlem is Nowhere which I’ve been rereading since I moved to Harlem.

What superpower would you most like to possess?
Is there one where you live forever? I want that one.

What role does place have in your writing?
Let’s scratch place and call it “setting.” After my characters, it’s everything. Los Angeles and New York City, Y2K to 9/11. And the idea of my homeland Iran. 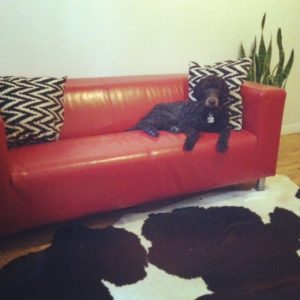 What is your writing process?
Feast or famine. Write only when I want and then write for days on end, nonstop. I do not write every day and you can’t make me; I do however live every day and that makes its way into my work, I swear.
Other rules and regulations: no clutter, no windows (or else curtained), no music, no distractions, dog and snacks at my side, chamomile tea instead of coffee (I need to be calmed down, not amped up, to think). 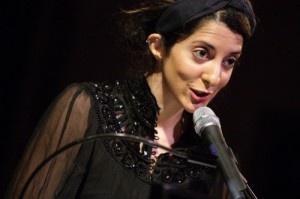 What are you working on right now?
A giant feature for Harper’s that I’ve been reporting on since last spring and my third novel.

What did you want to be when you grew up?
Since the age of 4, I’ve never wanted to be anything but a writer.

Porochista Khakpour is the author of the critically acclaimed novel Sons and Other Flammable Objects (Grove, 2007) and the forthcoming The Last Illusion (Bloomsbury, May 2014). She has written for the New York Times, the Los Angeles Times, The Daily Beast, Slate, Salon, Spin, and many other publications. She has been a Johns Hopkins, Northwestern University, Yaddo, Ucross, Sewanee, and National Endowment of the Arts (2012) fellow. She currently teaches at Columbia and Fordham Universities. She was born in Iran, raised in Los Angeles, and currently lives in New York City.
Tags: Page Turner, Porochista Khakpour, Sons and Other Flammable Objects, Studio Visit, fun facts, process

A Soundtrack to “Southern Cross the Dog”
Bill Cheng talks us through his five favorite blues musicians, and how their work inspired his debut novel.

Muslim Self-Portraits (and Accusations) at Heart Mountain
At the Japanese American internment camp site, an art exhibit featuring photographs of Muslims has been the subject of complaints.