The artist’s plastic-bag installations caught the attention of the NYPD. 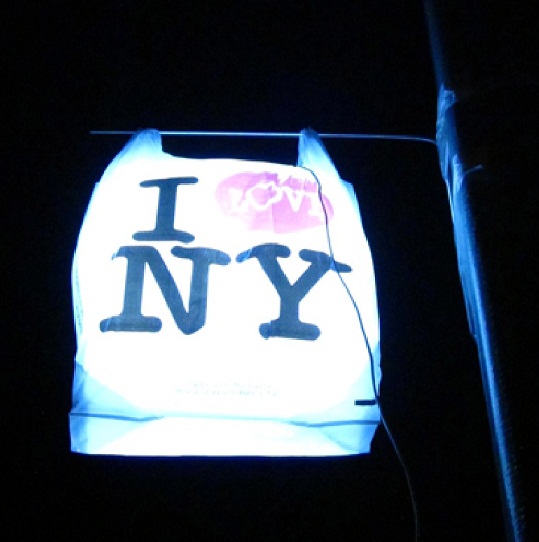 Takeshi Miyakawa is about to blow up. For years, the Brooklyn-based, Japanese-born furniture designer has been unknown to the general public. Instead, Miyakawa cultivated a small but dedicated fan base within design and architectural circles, particularly through the online magazine Designboom.

But we believe all of that is about to change. Last week, Miyakawa was featured in The New York Times’ Home & Garden section. Reporter Penelope Green called Miyakawa the “maker of delicate pieces that are both conceptual and functional [and] may be one of the first to do so.”

The bigger story, however, centered on Miyakawa’s legal troubles. On May 19, Miyakawa was arrested for hanging plastic “I ? New York” bags filled with white LED lights, which passersby mistook for possible bombs, on trees in Manhattan and Williamsburg. The public art exhibit—timed to coincide with the International Contemporary Furniture Fair—landed Miyakawa in Riker’s with a 30-day sentence and a prescribed mental evaluation. (He was released after five days, and his psychological assessment is pending.)

The incident spawned a viral “Free Takeshi” movement. A petition for his release quickly gained 2,000 signatures, and the movement’s Facebook group has more than 3,600 members. (The petition proclaims: “this is what we call art. instead, the NY justice system calls this terrorism and endangerment.”)

Miyakawa may have gotten himself into serious trouble, but the good news is that he now has a larger audience for his art. Whatever happens on his court date—June 21—we’re going to be paying more attention to Miyakawa’s sleek, high-concept creations, which may begin to gain the traction they deserve.

Takeshi Miyakawa Is a Free Man
It was art, not bombs.