The only thing to make after Thanksgiving is phở 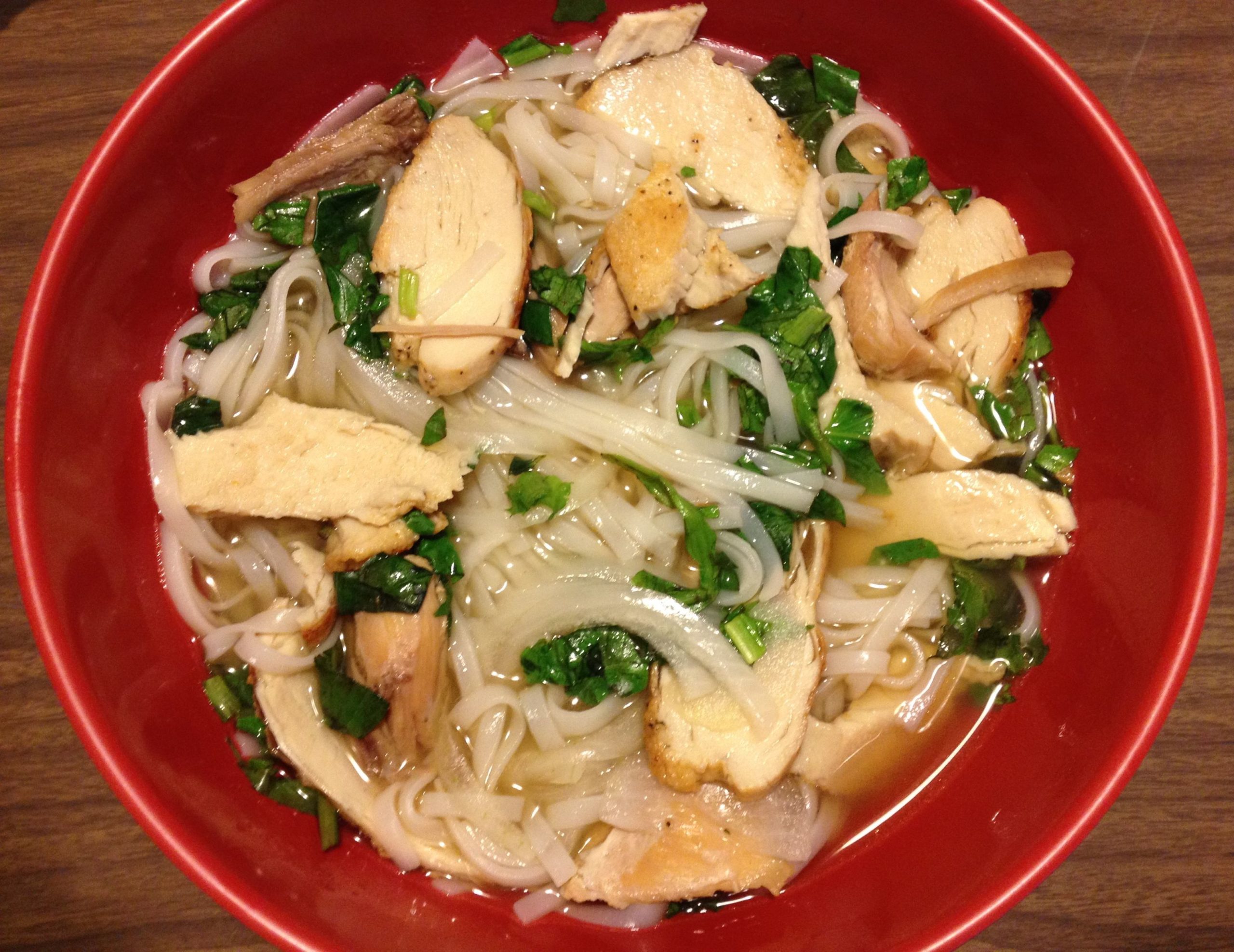 Editor’s Note: When we received a text from Phu Diep in Washington, D.C., that read “Happy Thanksgiving! At home with the fam. Mmmm turkey . . . and turkey phở on Sunday!”, we had to request the recipe. This is Phu’s mother’s special Thanksgiving weekend dish. We asked him to talk to his mother about learning the American tradition and how she and her family made it their own.

2. Put all leftover bones in pot.

3. Add about three bowls of water (almost fill pot, but leave room for more ingredients, water, and/or bouillon). Bring to boil. Scoop out fatty grease that boils up with a slotted spoon.

6. Add toasted ingredients and let boil. Once boiling, let simmer on low for an hour. Add water or chicken bouillon to taste (make sure it’s not too salty or too watery). You can let it cook longer but not for too long . . .

8. Divide steaming noodles into individual bowls. Ladle broth on top of noodles and shredded turkey. Serve the fresh condiments on a plate nearby. A spicy sauce is highly recommended!

When did you start making Turkey phở and how did it start in your household?

I’ve been making turkey phở ever since we started cooking turkeys. Probably at least twenty-five years now. Every year we got a turkey from the company (Litton Industries, a government contractor/factory, now owned by Northrop Grumman) for Thanksgiving and Xmas. The bone is good for making soup, lots of flavor. The company stopped giving turkeys around 2000—but gave money instead. So we used the money to buy the turkey. We wanted to keep celebrating Thanksgiving each year.

Can you think of any great Thanksgiving memories (maybe involving turkey phở and maybe not?)

When you guys were younger and auntie and uncles and cousins lived nearby we always had really big Thanksgiving dinners—so many people come to eat. Our family, your aunt and uncles and cousins, grandparents, other uncles, and family friends who didn’t know how to do Thanksgiving turkey. We would have two turkeys and ham and everyone would cook so much food. We had big Thanksgiving dinners for over ten years! Then everyone grew up and got married and Thanksgivings got smaller because people are now eating with other families. But it’s still good to celebrate and cook and eat and whoever can come over, come over. But if people don’t come for Thanksgiving, people still come on Friday, Saturday, Sunday to have left over turkey phở. So we still see everyone.

What year did you celebrate your first Thanksgiving, where were you? And, what was life like back then?

Our first Thanksgiving was first time we all lived in the house on Lawnsberry with your grandma, aunt and uncle and cousins, and other uncle. That was 1981? We just moved from small town in Minnesota to a city in Maryland and shared the house with your auntie, uncle, and cousins. Fifteen of us living in that house. We learned about Thanksgiving at church and work and you kids learned about it in school. We had tried Thanksgiving food at work and at church, a little bland. The people at church told me and your aunt how to cook the turkey and stuffing and other food like mashed potatoes and cranberry sauce. When we got the free turkeys from work, we wanted to try cooking turkey dinner and so had our first Thanksgiving. Then we just kept doing it each year and we got better each year, we learned how to cook more things— cranberry and marshmallow, ham, biscuits, and we made other stuff too that’s not American food. When your sister and brother got older, they made really good fancy food! We like to eat, ha.

We knew Thanksgiving was an American holiday, and holidays here are same as holidays in Vietnam—time to meet with your family and friends and celebrate. So we knew holidays, we just learned to do this one with American food and the way Americans do it. But we did learn it is to say thank you for all the things you have and our good life. So we like the holiday.

It was nice to be able to do it like the Americans. When we moved here, we were so excited. There are so much freedom and opportunities. We could find jobs and work hard and save money. We were so excited to be here, to have jobs. (I didn’t even have an education—I was just trying to learn English and take care of you kids with Grandma.) Dad got his technical diploma and could get a good machinist job. Even I got a good job and I still work there now! It is very American to be able to do Thanksgiving, and it is good to think about how we work hard and have a good life here.

Any other dishes you’ve invented since coming here?

Most of time, everyone goes home with the leftovers. The only things usually left are the turkey bones and some meat, so the only thing after Thanksgiving to make is phở.

Do you remember a time when you couldn’t get the ingredients you needed in the US? What were some favorite recipes?

I never had a problem finding ingredients. We just cook with what they had in the store, nothing special. But it’s easier now with all the Asian and Latino stores . . . You want some food to take home?

Phu Diep is an education consultant in Washington, DC.