“Do you know the situation in Bangladesh?” Sohel Ali Hussein asked as we sat inside the second-floor office of the immigrant rights group DRUM – South Asian Organizing Center in Queens. As the 7 train trekked above the Latino and South Asian hustle of Roosevelt Avenue, Hussein recalled the threats, beatings and near-fatal injuries he endured before fleeing from his native Bangladesh.

The gruesome repression enacted by the Bangladeshi government, controlled by the ruling Awami League is the situation Hussein was referring to. This looked like “violent, sometimes public, killings of religious minorities, secularists and free-speech advocates in Bangladesh,”a New York Times opinion piece said.

Hussein came to the U.S. seeking asylum, after a tumultuous journey that spanned across 13 countries. As a college student, he had been an active member of the Bangladesh Nationalist Party (BNP). According to a BBC country profile report, the BNP “is leading a campaign of civil disobedience to have the Awami League government step down in favour of a caretaker administration to hold fresh elections.”.

Indeed, this civil disobedience that Hussein and other BNP members have participated in has not gone without consequence from the government.

According to William B. Milam, senior policy scholar at the Woodrow Wilson Center in Washington and a former U.S. ambassador to Bangladesh and Pakistan:

“The BNP has become the primary — really, the only — target of the government’s so-called law enforcement efforts. The Awami League routinely deploys the judiciary and the police against its political opponents and any dissenting voices in civil society.

High-ranking BNP members have been framed on spurious corruption charges, among other things. According to the International Crisis Group and Human Rights Watch, the government has silenced critics by resorting to enforced disappearances, torture and extrajudicial killings. Journalists who dare cover any of this are being charged with sedition and treason.”

Hussein was detained upon arrival in the United States and spent over 10 months in the El Paso Detention Center. There, he was one of the leaders of a hunger strike that was part of a national wave of hunger strikes in detention centers fighting for release of detainees and protesting unjust conditions and civil rights violations. His journey as a criminalized migrant and organizer for migrant justice is deliberate.

“[They] threatened my life,” Hussein said, recalling the phone calls that his family received in 2014 in his native Bangladesh. Born in Comilla, about 100 kilometers south east from the capital city of Dhaka, Hussein had lived with his mother, father and younger brother.

“Don’t do BNP [work]” a voice would say from an unidentified number.

“I was targeted for a long time, two years. I protested for two years.”

Armed men identified with the ruling Bangladesh Awami Party would show up at his father’s shop asking “Where’s Sohel?”

“They wanted you to be afraid,” Hussein explained.

The threats were far from hallow. “The first time, I ran,” Hussein said of the first time men from the Awami Party came at him to attack. Hussein was at a small BNP meeting with no more than seven people when three motorcycles of armed men with sticks approached. “Everyone ran.”

Hussein said of the fate of those who protested the Awami Party: “Khatam Khiya (They finish you).”

Weeks after the first attempted assault, Hussein went to a large gathering as a key leader from the BNP was visiting Comilla. “[They] attacked me on the way [back from the meeting]),” Hussein recollected. He recognized one of the attackers as being from his own village.

Hussein was hospitalized for three or four days. He couldn’t remember exactly. Upon release, he fled to his sister’s house, which was 30 kilometers away. After 15 days, he thought things had quieted down and returned to his village.

However, it didn’t take long for him to see that he was still a marked man. Villagers relayed how four motorcycles with two-to-three men on each, roam through the village looking for Hussein. “You should run,” he was told.

Hussein went to his sister’s again. While there, he learned his father’s shop was ransacked and looted. When asked about the possibility of support from the police, Hussein relayed that police were part of the government and against the opposition party.

Hussein was eventually found. “Bahut mara (I was severely beaten.)” Hussein said the only reason that he survived was because he played dead. Sustaining a severe head injury, Hussein was hospitalized for nearly two weeks. It was after this brutal attack that his father told him to leave Bangladesh.

He was detained by military or police twice along the way, in Panama and then Mexico. When he finally arrived in Texas, he was detained for the third time.

Hussein was one of 83 immigrants from Bangladesh in the El Paso Detention Center. He told immigration officials who interrogated him that he is seeking asylum. Not only was he denied asylum, he was also not granted bail or parole.

After being detained for over 10 months, Hussein was among eight detainees indefinitely detained, who launched a hunger strike on October 14, 2015. By noontime, 43 detainees had joined.

The hunger strike at El Paso Detention Center was part of a wave of hunger strikes protesting the US immigrant prison system’s denial of the detainees’ basic human rights. The hunger strikes were called #FreedomGiving hunger strikes as they took place in the weeks leading up to Thanksgiving. DRUM was the principal coordinator of the strikes from the outside.

The detainees accused the US government of violating federal and international law for releasing the names to the government they were fleeing.

A Growing Movement to Prevent Being Deported To Death

In October of last year, 16 organizations, including DRUM and the American Civil Liberties Union (ACLU), sent a letter to Attorney General Loretta Lynch, Secretary Kerry and Secretary Johnson accusing them of systematically denying parole and bail to Bangladeshi asylum seekers.

They said that the denials were due to the “unjustified stance” that all those affiliated with BNP are members of a Tier III terrorist organization. The letter also pointed to “large numbers of Bangladeshi detainees unjustifiably held by ICE.”

Hussein was one of many Bangladeshi asylum seekers caught in this political standoff.

Immigrant rights advocates filed a complaint with the Office of Civil Rights and Civil Liberties but despite what should be an open and ongoing investigation, those detained were deported.

Despite ongoing advocacy efforts on behalf of detainees who continue to suffer prolonged detention, often without quality legal representation or translation, deportations have continued. For many, like Hussein, deportation is a death sentence due to the life-threatening circumstances they narrowly escaped.

Advocates used the hashtag #Deported2Death to draw attention to the fatal situations detainees were fleeing from and would be returned to.

When asked why he helped start the hunger strike, Hussein said matter-of-factly in Hindi, “They would kill me in Bangladesh,” implying he had nothing to lose. The hunger strike lasted a week. Ultimately,11 of the 54 hunger strikers were released from detention, including Hussein.

DRUM organized a symbolic funeral in Jackson Heights to “mourn all the migrants deported to death” including the 85 South Asian migrants deported out of a detention center in Florence, Arizona in April. Those deported spoke of being put in body bags and shocked with tasers. While the treatment of detainees has long been documented and challenged, abuse during the course of deportation proceedings is fairly new to the public eye. DRUM has remained in contact with those deported and is fundraising for those rebuilding their lives back in Bangladesh.

Kazi Fouzia, a community organizer for DRUM, spoke at the symbolic funeral about the root causes of migration, “If we think why people cross border, why people come this country, my answer: nobody makes a choice to migrate to another country, nobody wants to cross border. The situation, the condition, politically unjust, pushes us to move to another country. We are the victim of capitalism. We are the victim of unjust political situation back home.”

Former detainees who also participated in hunger strikes while detained spoke at the rally and relayed their stories of migration and detention, echoing Hussein’s story – of fleeing persecution and enduring a grueling journey of migration. They called for the release of those still in detention and at risk for being “deported to death.”

Dominique from IMI: as Central American migrants, we send solidarity, we know how this affects all of us pic.twitter.com/hRmotNk6Yu

In May, the Department of Homeland Security announced a new round of immigration raids targeting Central American mothers and children. In response, many advocates expressed outrage and drew attention to the parallel circumstances that DRUM was protesting: migrants were fleeing extreme violence and were becoming victims of the same violence they sought to escape. Senator Bernie Sanders wrote to President Obama urging him to “acknowledge that most of [the] families are refugees seeking asylum and entitled to humanitarian protection and legal counsel.”

Anshu Khadka, an organizer with DRUM closed out the symbolic funeral. “If we keep quiet, this will keep happening. It will always be like this. We will always have to suffer. We must fight the fight that’s ours!” she said.

As detention and deportation continues to ravage immigrant communities amidst a growing global refugee crisis, Hussein’s story is one of resilience and courage. He may never see his family again. He remains hopeful of being granted asylum one day. In the meantime, he is one of many migrants working to survive and organizing for migrant justice. “We’re not criminals,” he said.

Jai Dulani is a writer and multimedia artist who has worked for racial and gender justice at the intersections of LGBTQ, youth, immigrant justice and anti-violence movements for over a decade in New York City. He is the co-editor of the anthology The Revolution Starts At Home: Confronting Intimate Violence in Activist Communities. Dulani was a 2016 Open City Fellow.

The Democracy of Patience: Inside a Polling Station in Queens
“Romney is very hostile.” 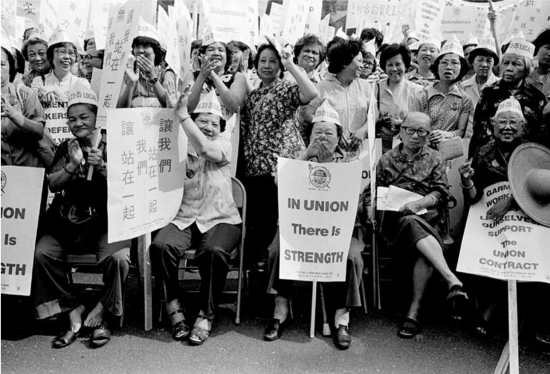