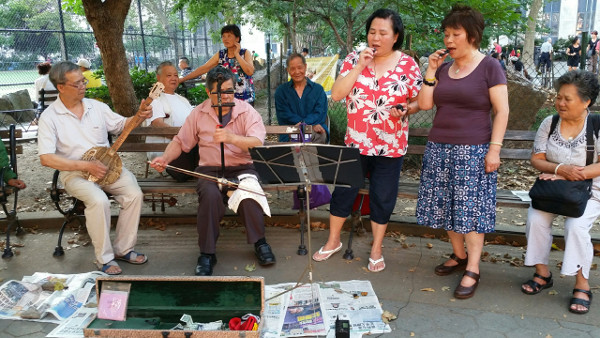 Under the shade of the trees in Manhattan’s Columbus Park, Chinese American street musicians and local residents gather and harmonize songs that they learned while growing up in China. Playing traditional Chinese instruments – the qinqin ??, zhonghu ??, gaohu ?? – and singing in harmony, they carry the rhythm and memory of songs from Guangdong, a province in Southeast China where many Chinatown residents came from.

What appears to be as an ensemble of musicians and singers is actually a gathering of regulars in Chinatown, many of whom are first-generation immigrant retirees, who come and go in this ensemble as they please. This group is one of several who gather in Columbus Park specifically to sing songs from the Cantonese opera, or yuequ ?? in Chinese.

Several times a week, these Chinese community members, mainly from Chinatown and Brooklyn, gather to sing and play songs from Guangdong. In this ensemble, they create and cultivate an open community among themselves where anyone who wants to join is welcome. For many of them, this togetherness keeps alive their regional culture and helps them prevent the onset of mental health issues.

“Anyone who wants to sing can sing,” Ting Jiang says. Jiang is a community member who volunteers at the Chinatown Senior Citizens’ Center on Mulberry Street and has been coming to the park for over a decade. Jiang warmly waves and smiles at people who pass by him as he sits on the bench. He has been singing with the group for over a decade and knows many of the people in the park because the same people come by for lunch at the center.

Jiang gets up from the bench, joins the group, and begins to sing a song from memory. Soon, a group of teenagers walks by and one begins beatboxing to the group’s song. Jiang gives one of the teens a thumbs-up and an older woman sitting on the bench nearby gets up to dance next to the young teen. The group leave and the songs continue as usual.

Around Jiang, others gather to join the ensemble and take turns going to the microphone to sing. In between songs, people joke with each other and call on each other to take the microphone. Today, the ensemble includes Wei Lin Guan on the qinqin and Huang Xian Li on the gaohu. Both Guan and Li have worked in the restaurant industry for years and have been coming here after work to play. Guan, now retired, plays all three instruments. Today he plays the qinqin, a three-stringed Chinese lute, popular in southern China. His version of the qinqin has a round drumhead made from python skin.

Accompanying his plucking is the zhonghu and gaohu, both of which are bowed string instruments that are part of the huqin ??family of Chinese instruments. Although these artists are often seen playing these instruments at Columbus Park, these huqin instruments are popularly used in Chinese orchestras and performed in Chinese operas. The gaohu‘s sound is much higher than the low-pitched zhonghu and is played by holding it between the knees and using the bow, while the zhonghu is held on top of the left knee. These huqin instruments are also oftentimes played by elderly folks in subway stations near Chinatown and throughout the city.

Unlike the street musicians in the park, the subway players often play by themselves and do so in stations during rush hour and weekends, sticking it out in the heat of the NYC subway for the dollar tips they receive for their livelihood.

In this ensemble, several of the members like being part of it primarily for health reasons, such as preventing the onset of illnesses such as Alzheimer’s. “This music keeps us happy and helps us maintain good health,” Guan says.

For others, being here is their way of passing time. Yu Chen, a former restaurant employee, is one of the singers who comes out to sing almost every day. “After I retired and my kids grew up, there’s not much for me to do at home. So we all come out here and sing.” Being a street musician is a pastime that costs him little. “We don’t have that much money after we retire,” he said. “Our salaries are only a few hundred dollars a month. That’s not enough to go on vacations. So we come here and play.”

Chen has been coming to the park for two years now. Before he retired, he would come to the park and watch the group sing and play after work. Eventually, members encouraged him to join in and sing. He has come back ever since. Like Chen, many of the musicians have not professionally pursued study of the songs, but rather, learned them over the years and practiced them to relax after work.

As Chen takes a break and looks on at the other performers, he says, “This is Chinese culture. This park is a central place for us to gather and spend time together.” Chen notes that it is during the summer months when the weather is warm that the park becomes a reliable space for them to come together. During the winters, many stay home.

As the musicians perform, a humble audience sits on the bench across from them with onlookers occasionally stopping to leave dollar-and-change tips in their instrument case. The musicians do not rely on these tips for their livelihood. After playing for the day, the money that they earned is just enough to buy some coffee and baked goods. For them, it is primarily done for enjoyment. One audience member, who wish to be referred to as Louie, has been coming to Columbus Park for over 40 years. “It’s very comfortable, sitting here listening to them,” she says.

But it has not always been easy for these musicians. One of the singers shared that they have been fined previously by park management officials. They had to cough up more than a hundred dollars for fine, allegedly because the music they played was too loud.

Noise level and lack of sound device permit have been contentious issues between the street musicians and park officials. In 2011, six NYPD officers violently arrested an elderly Chinese musician, Yizuo Wu, for not having a performance permit.

Many in the Chinese community rallied in support of the musician and against police violence. And despite the Wu incident, people in the community continue to keep coming to the park. Louie notes that it has been rather peaceful. Spectators come by for hours on end and sit to listen to these musicians. Occasionally, they may come in and join in singing.

When asked why he keeps coming back to this park, an employee in the restaurant industry, who wished to be referred to only as Michael, says, “My friends all gather here in the park. I can run into them and listen to them sing and play.”

He smiles as he watches on and explains how he wishes U.S.-born Chinese would appreciate this music the same way. “I feel very happy listening to them play. Because this is my culture,” Michael says.

Huiying Bernice Chan is a second generation Toisanese poet, educator, and organizer from New York City. Huiying holds a B.A. in Ethnic Studies and Education from Wellesley College and is currently a writer for the Chinatown Arts Project of the Asian American Writer's Workshop. Starting in September, Huiying will spend a year traveling to and writing about Chinatowns around the world as a Knafel Traveling Fellow.
Tags: Columbus Park, Street Musicians, er hu, group singing, mental health, police harassment, traditional Chinese instruments 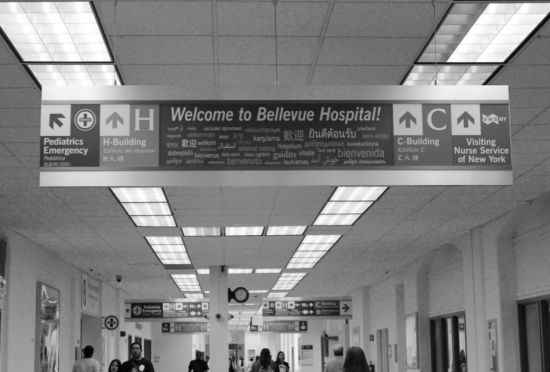 What happens after torture?
While America’s most storied hospital welcomes survivors, your body protests: what did it survive? 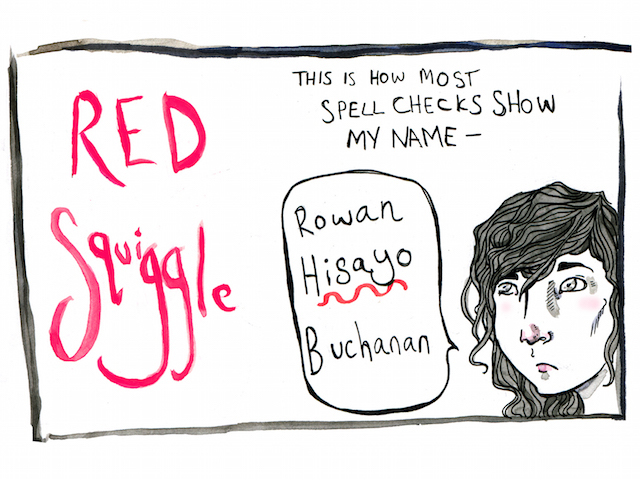