On the domestic terror of the 1990s, and avoiding cultural amnesia. 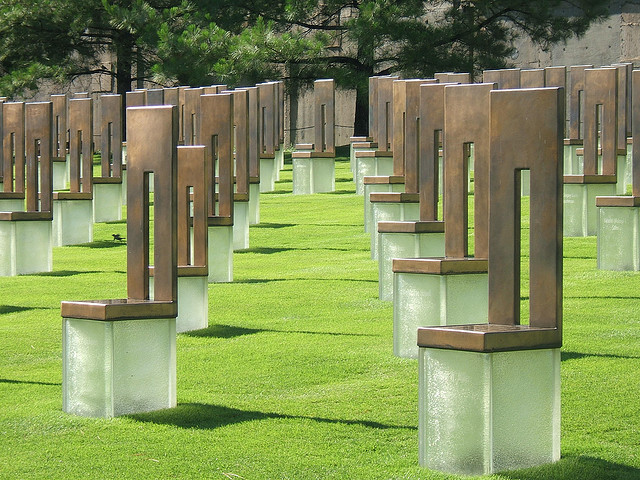 “So I would have no objection if we picked out a country that is a likely suspect and bombed some oil fields, refineries, bridges, highways, industrial complexes, airports, military bases, and anything else that is of great value but doesn’t shelter innocent civilians. If it happens to be the wrong country, well, too bad, but it’s likely it did something to deserve it anyway. Or would in the future. And its leaders, as well as other troublemakers, would get the message: Terrorism is too costly a game.

President Clinton says we should be cautious about placing blame or taking action. OK. But when the time comes for punishment, it wouldn’t be an eye for eye. That’s just a swap. We should take both eyes, ears, nose, the entire anatomy. That’s how to make a lasting impression.”

I remember that morning. I was ironing my clothes for my night shift at the Olive Garden. I remember Connie Chung breathlessly telling me through the television that men of a “Middle Eastern hue” had been seen fleeing the scene. Between the lines she spoke was the clear message: The war in the Middle East has finally come to the United States. The coverage that day was relentless—they told me about Beirut, they told me about Islamic Jihad, they told me that clusters of Arabs lived in Oklahoma, they told me how to spot suspicious Arabs in my neighborhood. Soon after began the talk of retribution. Later, in September 2002, they would tell me that Timothy McVeigh had met with Iraqis, of course, and that Saddam’s own army—clearly—had planned it all. Chung and Royko were gone, but their colleagues had the same message: We should seek that retribution, now. Afghanistan had already paid with its eyes, ears, and noses—its entire anatomy—for NYC; now, Iraq must pay for Oklahoma City.

If the retribution counter started in April 1995, it reached the Royko-specified end in April 2004, when the city of Fallujah was erased under Operation Vigilant Resolve—“the OKC decade,” if you will.

Some may remember April of 1995 as a particularly terrifying time. The Unabomber was terrorizing The New York Times and The Washington Post and the U.S. Postal Service, demanding that the news outlets publish his manifesto. Waco was still smoldering in the nation’s unkempt backyard. This was the heyday of ethnically white “domestic” terrorism. By the end of that decade—by 2001—we collectively forgot all “domestic” terrors, and all colors bled into one: brown.

If McVeigh is remembered now, he is recalled as a counter-example to the perniciousness of Islamophobia— the white Christian terrorist. This account—the liberal equivalent of balancing ledgers—sits uneasily with me, as it keeps the terror of the mid-1990s out of our lives, shunted to the edges of political and social awareness. Even as a Christian terrorist, a veteran of the Gulf War, McVeigh remains an outsider, an anomaly. And this is why: to make McVeigh one of “us” is to make Nidal Malik Hasan into one of us, as well. This is not a step that comes easily for any of us. Hence, in our recollection of the 1990s, we would rather forget McVeigh. This cultural amnesia “helps” us in other ways—the war is never here, the colony is always at the edge, and the drones that kill civilians there do not need to be made accountable. Historian Bruce Cumings has called this type of amnesia “buried history,” wherein a “hegemony of forgetting” determines which particular aspects of the present recall specific pasts. Awash as we are in a celebration of all things “retro,” the politics of remembering nevertheless remains out of our view.

The ’90s in America were a decade of terror inside—from race riots to postal bombs to mass murders. But it was also a decade full of terror on the outside—the Gulf War, the rapid abandonment of Afghanistan, the rise of the Taliban, the conversion of Pakistan into a political pariah state at the mercy of the International Monetary Fund and the World Bank (to note only the world of the Middle East and South Asia). To remember the 1990s is to fully comprehend the geo-political territoriality named “Af-Pak” (Afghanistan-Pakistan) by the Obama Administration in 2009. To argue that the decade following 2001 was a break is our own particular amnesia.

Ramadan Meditations: A Muslim Woman’s Journey Towards Faith and Acceptance
"In the Pakistan I grew up in, women prayed at home. Mosques were the kingdom of men."

YouTube Channel “Sameer’s Eats” Puts Halal Food on the Culinary Map
"What makes it halal is the meat."

Ramadan: 5 Commonly Asked Questions
Do I get hungry? Yes, that’s the point.