When Donald Trump tweeted that four women of color in Congress should “go back and help fix the totally broken and crime infested places from which they came,” he hit a nerve. His carefully selected words invoked a collective memory.

Go home: It’s a phrase many have heard before, one that challenges people’s membership in the communities that they know and love. It implies a return that is inevitable, and ultimately, it is a rejection of the possibility of building lives on land that was once someone else’s home.

The Trump administration has found footing in hateful language that has always been a part of the United States’ culture and life. This culture asserts that only white people, and specifically, white cis rich men, are welcome here.

The reality, however,, is that the United States was built on the home of indigenous people; what is now called New York City is occupied Lenape, Wappinger, Canarsie, and Matinecock land. These people have been colonized. “Go home” propagates historical hatred from one of the largest platforms in the world and affirms an ideological fantasy that erases native peoples and encourages white supremacy. Racist sentiment is at the heart of such hurtful language. Regardless of what people like President Trump say, many have built homes here.

In New York City, home has many colors and smells and sights. It is the horrible stench of rotting midtown garbage, and the clean orange smells of Mango kulfi. It is the cream of a corner boba store and the butter in a morning Bacon-Egg-and-Cheese from the bodega. Regardless of citizenship and status, communities look out for their own. For many, home is in these communities, ones that become familiar with the smells of living in a compact city, a city that will shut down streets to protest their neighbor’s unjust arrest.

In 2018, the Asian American Writers’ Workshop collected literary works in an anthology titled “Go Home!”. The title shares a lineage with the same hatred that brought Trump to speak those same hateful words. As Viet Thanh Nguyen says, “The existence of Go Home! testifies to the power of language as a home for all, albeit one that we must often fight for. Against the racist demand that we go back to where we came from, we say that we are already at home, not just in the United States, but in English.”

Take a moment to read such examples of writers demonstrating the homes they have made in the English language.

se you need that to keep doing the work that you do. But I feel like the direction that Israel is going in implies that there will be one state for everyone. The question now is how they will [all] live.”

This was Zena, a writer, an activist, a Harvard graduate and a U.S. Policy Fellow at Al-Shabaka, the Palestine Policy Network, talking to Open City Fellow Mohamad Saleh.

Saleh wrangles with contemporary conceptions of diaspora, the history of said term, and what the politics of liberation looks like.

“The experience of diaspora focalizes the dispersal of a group from a place to which it cannot return, which results in that group’s reconstitution somewhere else.”

The studio and the classroom as home

“‘There’s a lot of stress in this community,’ she said, explaining the influence of Trump’s anti-immigrant policies on her students. ‘I see the challenges that my students share in class. Some become withdrawn,’ she added, ‘I feel that they were told by their parents not to share because they’re afraid, but sometimes they just do it anyway.’”

“Speaking of her American-born students, she explained, “They were born here, they’re American, but they’re also considered outsiders” as the children of immigrants. “I think we also connect in a way when I tell my stories of being born in Ecuador but also considered an outsider.” When (Cecille) Chong started kindergarten in Ecuador, many of her classmates had never seen a Chinese person before. “China! China!” they taunted — pronounced “chee-na,” a Spanish colloquialism for “Chinese female.””

Cecile Chong looks to art as a way of collaborating and connecting her students’ experiences. Open City Fellow Hannah Bae first got to know Chong as an artist, but in this piece revels in the way she works with being both a teacher and artist.

As a public school teacher in Sunset Park, Chong has to consider the recent gentrification along with the age-old immigrant community. Today, we can use Chong’s body of work and liberatory thinking to wonder how our own art can bring us together and help us understand one another better.

Read Open City Fellow Hannah Bae’s “ What Does it Take to Create Art that Bridges Divides?”

Home and safe inside mosques?

“American mosques are important, fragile things. We, the faithful, are always alert to the danger of losing spaces like these. We are always aware of how much they take to maintain.”

“What did matter was that no one was safe. The NYPD didn’t only have informants in local mosques. They also regularly visited ‘hot spots’ in Muslim neighborhoods, or — as they were known in their communities — restaurants, butcher shops, and cafes. By the time the AP story broke, it was clear that the NYPD was ‘monitoring even its closest partners in anti-terrorism work, including imams who frequently appeared at the Mayor’s side.’”

As ICE raids threaten our communities, it’s important to remember that police surveillance has long been a tactic of the government. Open City Fellow Nora Salem explains the toll that police surveillance takes on a community. Even where there is no “reasonable” threat, our country has long argued that they’re looking out for us. The question remains: who gets to be a part of this “us”?

“Sanwar, who is affectionately called Baul Dada by people in the neighborhood who know him, first came to the United States approximately 30 years ago, hoping to make enough money to provide for his wife and four children in Bangladesh. All those years, he has not once returned home because of his immigration status. As an undocumented immigrant, he will not be able to return to the United States if he leaves.”

“After nearly 40 years, is ‘home’ still ‘home’ or is it a foreign country, a land full of strangers? And if it doesn’t prove to be what one expects or wants it to be, there is no option to return to the place that has been home for most of your adult life.

Open City Fellow Syma Mohammed chats with a food cart vendor in this piece that sifts through the enstrangement created by the process of undocumented immigration. While Trump and conservative politicos assert the way these individuals threaten our communities’ balance, Sanwar Ahmed’s life shows that the opposite is the case.

“His knife licks the board as he slices a gathering of walnuts into a small canyon. After a lifetime spent baking, it is here, in this place of cutting up, that he is made whole. At 78 years old—over 60 of those years spent perfecting his craft—Marhaf’s ingredients are like old friends, the kind that slip quietly into the cracks of everyday life, those that when they surround you, feel just like home.”

Marhaf Homsi is a member of the Bay Ridge Muslim community. Baking has long been a passion of his. Open City Fellow Maryam Mir explains how Homsi’s business has changed over the years with waxing and waning interest. At the end of the day, Homsi sees baking as a way of creating community.

“Refugee is not a title that Marhaf likes, yet it is often placed upon him, a way of understanding his situation or categorizing him as other. The name of his new business: Sweet Refuge. A clever inversion of power—a way of reclaiming the refugee title and making it his own. Instead of a fleeing from, it becomes a coming home—a refuge, a place to stay, if even for a moment.”

Our communities are the homes we make. They are rarely identical and often frustrating. As Open City’s recently published pieces show, home can take many forms, each of them beautiful in their own right.

Our writers make homes in language, some impossible and unknowable. As Viet Thanh Nguyen explains in Go Home!:

“The beauty of a home in language is that it allows us to create a multiplicity of homes …[Writers] describe homes filled with all kinds of emotions, from love to hate and everything in between. Their homes are places of comfort and discomfort, of belonging and alienation, of the beginning of life and its end. But if homes are not always idyllic and are often conflicted, and if in some cases it is impossible to go home because home no longer exists or is not a place one wishes to return to, then living with a degree of homelessness might be a necessity. There can be a danger in being too much at home, too secure, especially for writers. Feeling uncomfortable at times–feeling not at home–keeps us alert, empathetic, aware of how so many others are not at home or not allowed to feel at home.”

Ananya Kumar-Banerjee is an undergraduate Ethnicity, Race & Migration major at Yale University. Her work has appeared in Paper Darts, Teen Vogue, and the Indiana Review Online, among others. She is currently an editorial intern for the Asian American Writers' Workshop. Ananya is mostly concerned with the different ways that writing can be about love, liberation, and certainty. You can find her on twitter @anannavia.
Tags: Muslim Americans, Palestine, Sunset Park, jackson heights, undocumented immigrants

Comic Strip: “Excuse Me, Please!”
A compendium of responses from video store clerks in Jackson Heights. 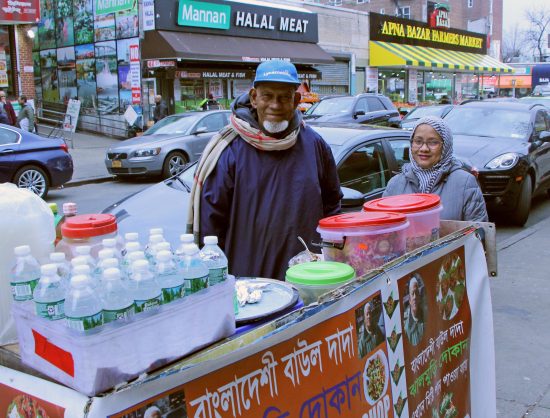