Vijay Prashad at the Brecht Forum. Plus, how Kumar Goshal (1899-1971) carved out a theory of US imperialism in the African American press. 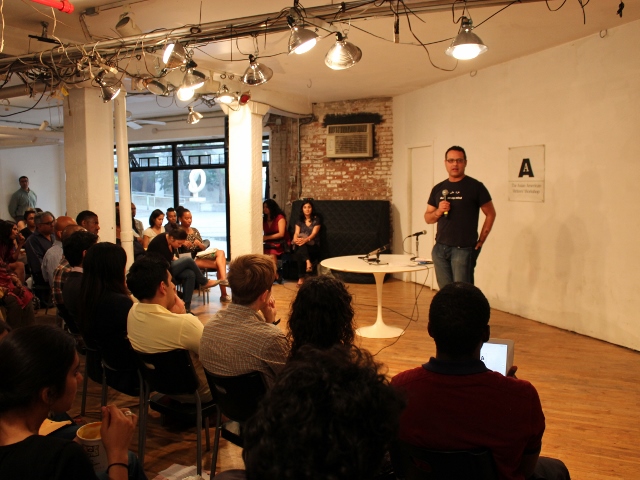 The Counterculturalists is a new series in The Margins that looks at Asian American or ethnic identity as an alternative, rebellious, uncategorizable subculture, an avant-garde in both politics and aesthetics. Through interviews, original essays, multi-media, and criticism, we’re featuring writers and artists whose work calls us to the margins. Check out more in the series here.

This past weekend, the Brecht Forum, a cultural and educational home for people working on social justice founded nearly 40 years ago, announced that it would be closing its doors. In a statement sent to subscribers and supporters on Saturday, they wrote that “the economic climate, combined with the realities of real estate in New York City, have simple made the provision of space impossible for an organization of our means.” The news came as a shock to the many people who consider the Brecht Forum an intellectual home, including Vijay Prashad.

AAWW hosted the launch of Prashad’s book Uncle Swami: South Asians in America Today (The New Press) at the Brecht Forum in 2012. As part of our Counterculturalists series on Vijay Prashad, check out three edited videos from the event in which Prashad talks about academic futures, Islamophobia, and Obama the smooth criminal, followed by an excerpt from Uncle Swami on Indian journalist and one-time Hollywood actor Kumar Goshal.

1. On the pitfalls of the publishing world, and how a PhD doesn’t necessarily determine your academic future:

3. A nostalgia for open lunacy – Obama the smooth criminal:

An Indian Journalist in the African American Press

In 1915, the African American radical W.E.B. Du Bois (a close friend of many Indian nationalists) wrote an insightful essay, “The African Roots of the War.” In this essay, Du Bois pointed out that the growth of monopoly capitalism alongside liberal democracy in Europe and North America led to the creation of a large quantum of surplus capital, some of which was turned over to the white working class (which became an aristocracy among labor). The uneven union of the white working class with their capitalist masters led, Du Bois argued, to an intranational fight over the world’s spoils, mainly with the “darker nations of the world—Asia and Africa, South and Central America, the West Indies, and the Islands of the South Seas. The present world war,” Du Bois continued, “is, then, the result of jealousies engendered by the recent rise of armed national associations of labor and capital whose aim is the exploitation of the wealth of the world mainly outside the European circle of nations. These associations, grown jealous and suspicious at the division of spoils of trade-empire, are fighting to enlarge their respective shares; they look for expansion, not in Europe but in Asia, and particularly in Africa.” This argument would appear two years later, with slightly different emphases, in Lenin’s Imperialism. Du Bois was greatly interested in developments in India, but his own writings were not to be regularly read by either the Indian political thinkers or the Indian radicals in the United States. Only later, in the 1940s, would an Indian radical in the United States develop an understanding of the growth of U.S. imperialism. Kumar Goshal (born in 1899) had come to the United States in 1920 and, after a stint in Hollywood, became an ardent proponent of Indian independence (he was also close to the Communist Party in the United States). After 1947, Goshal became a main correspondent for the Courier (an African American paper in Pittsburgh), where he wrote an important three-part series in December 1953 called “People in Colonies Versus the American Colossus,” where he lays out the contours of U.S. imperialism:

To enlarge their empire during and since World War II, U.S. industrialists and financiers have knifed partners when partners were unable to retaliate; brought up or influenced governments through grants and loans; arranged 99-year leases for military bases on foreign soil; signed trade treaties giving U.S. capital “equal treatment” with weak domestic capital in economically backward countries; acquired air and naval bases in countries with weak or unpopular governments. No country is too small to escape the eye of U.S. corporations roaming the globe for more profits.

Not only did the United States put its considerable power and influence behind U.S.-based corporations, but it also found willing allies in the “darker nations” to do its bidding in the name of “modernization” and “democracy.” U.S. imperialism was always smarter and more flexible than that of its European forebearers, who quickly became “American” in their own relationship to the rest of the world. Goshal was not known in India, but his line of analysis is not different from those communists who had few illusions about the Indian bourgeoisie and its tepid commitment to national sovereignty and to national development. Goshal did not directly write about the links between domestic racism and imperialism. However, there is something poetic in his choice of subject and venue: he carved out a theory of U.S. imperialism in the African American press, largely the Pittsburgh Courier. It was to a readership aware of the full weight of Jim Crow that he elaborated his views on the emergence of a global Jim Crow under the tutelage of U.S. power. The U.S.-constructed and -run oil towns in Dhahran (Saudi Arabia) and Zulia (Venezuela) mimicked the racially segregated mining towns in Arizona and Colorado. The United States chose to praise pliant regimes, even when these were autocratic (Batista in Cuba), and it began a habit of overthrowing regimes that wanted to be independent (Árbenz in Guatemala). The uniforms of a new kind of empire (bases and docile governments) were being stitched and starched, but these uniforms borrowed heavily from customs of domestic hierarchy. These elements can be glimpsed in Goshal’s writing, which laid out the similarities and differences between British imperialism, which he knew well as a child and as a journalist, and U.S. imperialism, which he knew as an adult and saw emerge before his own eyes.

MORE IN THE COUNTERCULTURALISTS SERIES ON VIJAY PRASHAD:

“First Days in Radical America”: On Prashad’s memories of the student anti-Apartheid movement in the 1980s and learning how to live in the US

Vijay Prashad is the Edward Said Chair at the American University of Beirut, Lebanon. His most recent book is The Poorer Nations: a Possible History of the Global South (Verso, 2013).
Tags: Brecht Forum, Kumar Goshal, Uncle Swami