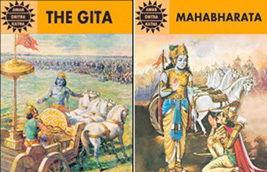 Does your knowledge about the Ramayana come entirely from comics your mom bought you from Jackson Heights? Or are you a comic book fan interested in engaging with one of the bestselling comics in both Asia and the world? Party down with the Workshop’s tribute to Amar Chitra Katha, the beloved Indian comic that’s sold more than 90 million copies, often featuring lovelorn maidens, fearless saints, and mythical kings romping around a half-toned South Asian fantasia, tinted yellow, blue and green.

Monica Ferrell is the author of a collection of poems, Beasts for the Chase, which won the Kathryn A. Morton Prize, and the novel, The Answer is Always Yes (The Dial Press/Random House), which was named a Borders Original Voices Selection and one of Booklist’s Top Ten Debut Novels of 2008. A former Wallace Stegner Fellow and Discovery/The Nation prizewinner, she directs the creative writing program at Purchase College.

Chitra Ganesh’s drawing-based practice integrating comics, site-specific installation, and graphic visual forms, seeks to excavate buried narratives typically excluded from official canons of history, literature, and art. She is the recipient of numerous awards, including grants in 2010 from the Art Matters Foundation and the Joan Mitchell Foundation for Painting and Sculpture. Her work is represented in collections worldwide, including the Museum of Modern Art, Brooklyn Museum, Devi Art Foundation, Deutsche Bank, the Saatchi and Burger Collections. Upcoming shows include a solo exhibition at the Gotenburg Kunsthalle in Sweden, as well as at Jack Tilton Gallery in New York. (www.chitraganesh.com/)

Keshni Kashyap is a filmmaker whose five short films have been screened in more than forty festivals around the world, and is the author of Tina’s Mouth: An Existential Comic Diary, published by Houghton Mifflin Harcourt. The graphic novel was named on Entertainment Weekly’s Must See list and praised by the Wall Street Journal, SF Chronicle, and Booklist, which gave it a starred review.

Himanshu Suri, better known as Heems, is an Indian-American artist and writer from Queens, NY. Suri is a member of the alternative rap group Das Racist. Founded in 2008 Das Racist has headlined shows across the US, Canada, Mexico, Korea, China, Europe, Australia and more. In 2010 they performed in an exhibit at the Whitney Museum’s Biennial and were nominated for Best Narrative Short at the Sundance Film Festival for their video “Who’s That Brooown!?”. Suri manages the group and has also released their first album, Relax, on his record label Greedhead Music distributed by Sony. He has also written about music and all things South Asian for Village Voice, Death and Taxes, Fuse, Stereogum and Alternet. Suri is an alumnus of Wesleyan University and New York’s Stuyvesant High School. He has also studied at London’s School of Oriental and African Studies.