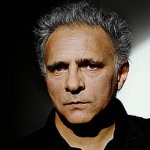 Join us for an intimate lunch with writer Hanif Kureishi, hailed by the New York Times as one of 50 greatest British writers since 1945. Kureishi’s newly released Collected Essays presents decades of his writings on topics intimate (the making of his Oscar-nominated film My Beautiful Laundrette), literary (the nature of the essay), and political (the fatwa against Salman Rushdie and the relationship between Islam and the West). Likened to the work of James Baldwin and George Orwell, the collection reveals Kureishi as the conscience of a post-imperial multi-racial England. It also tells the story of Kureishi’s childhood–how he grew up half-English, half-Pakistani in suburban England and escaped from 1970s skinhead fascism through the magic of literature. As he says, “As a teenager, I began to write. I wrote for my life.” Come hear Kureishi in conversation with Amitava Kumar, author of A Foreigner Carrying in the Crook of His Arm a Tiny Bomb. This intimate meal will be held at Yuva, an acclaimed restaurant specializing in Northwest Indian Frontier cuisine.

Hanif Kureishi, Commander of the Order of the British Empire, is a novelist, filmmaker, and playwright, whose work includes the novels Intimacy and the Whitbread winner The Buddha of Suburbia, two Oscar-nominated screenplays, and pornography. His screenplay My Beautiful Laundrette, about a young Pakistani man in Thatcher’s London who falls for a right-wing extremist, was nominated for an Academy Award, as was his most recent screenplay, Venus.

Amitava Kumar’s most recent book, A Foreigner Carrying in the Crook of His Arm a Tiny Bomb, was described in The New York Times as a “perceptive and soulful . . . meditation on the global war on terror and its cultural and human repercussions.” He is also the author of the memoir Husband of a Fanatic, which was a New York Times editor’s choice, several works of social criticism and fiction, and a collection of poetry, No Tears for the N.R.I. Kumar is a professor of English at Vassar College.

We will be closing ticket sales at Tuesday, May 26 at 9PM and will have a list of names available at the door for those who already bought tickets. Please arrive early or promptly so we can begin the event in a timely matter. We will begin admitting guests to the event at noon.

$20 includes lunch at Yuva & admission to event.
This event is open to the public.