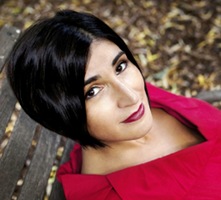 Come join us for an Asian American all-star comedy festival! AAWW favorite Jen Kwok, the velvety voice that brought you Date an Asian and Ballad of the Tiger Mom, will bring her ukulele and extraordinary talent. Relish the sharp stylings of Sheng Wang, who won top honors at NBC Universal’s Stand Up For Diversity. Enjoy the brains and beauty behind Nerdcore Rising, producer Negin Farsad, who has been named one of the top 50 funniest women by The Huffington Post. You’ll be treated to three rousing belly-aching sets followed by a moderated discussion.

The event is a part of Neighborhood Word, our programming series that brings Asian American writers to the outer boroughs.

Negin Farsad is the director/executive producer of Nerdcore Rising (a documentary about Nerdcore hip hop). She recently developed and wrote the MTV broadcast pilot and web series, “Detox.” She also directed/produced the Comedy Central series, The Watch List. Her solo show Bootleg Islam, which she wrote and performed, has appeared in multiple comedy festivals around the country.

Jen Kwok is a writer and performer whose comedic exploits have been featured on CNN, PBS, MTV, The New York Times and Rolling Stone Magazine. Jen’s distinct act – a sparkling combination of ukulele, wit and sass! – has made her a favorite on the NYC performance scene. Jen was also a finalist in NBC Stand-Up for Diversity.

Sheng Wang is a Taiwanese Texan who developed his comedy in the thriving stand-up community of the San Francisco Bay Area. He has toured with the Comedians of Comedy and American Eagle’s “Campus Comedy Challenge” He has also appeared on Comedy Central’s “Live at Gotham” and attended the “Just for Laughs” comedy festival in Montreal. His half-hour “Comedy Central Presents” will air this season.

This event is co-sponsored by Queens College.