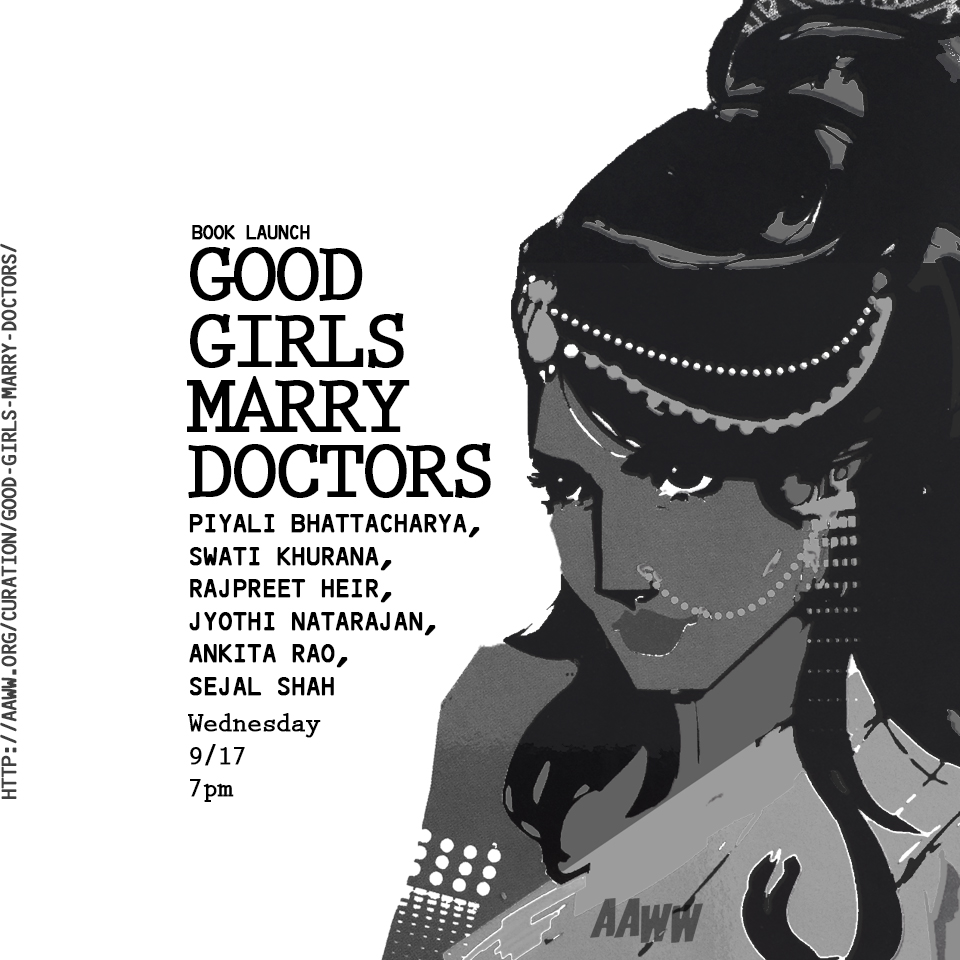 Piyali Bhattacharya is a writer, editor, and writing instructor based in Nashville, TN where she is Writer-in-Residence at Vanderbilt University. Her work has appeared in Ploughshares, The New York Times, The Wall Street Journal, National Geographic and many others. She is the editor of the anthology Good Girls Marry Doctors: South Asian American Daughters on Obedience and Rebellion, which was awarded a grant from the National Endowment for the Arts. She holds an MFA in Fiction from the University of Wisconsin – Madison, and is currently working on her first novel, an excerpt from which won the 2015 Peter Straub Award for Fiction. She can be reached at www.piyalibhattacharya.com.

Swati Khurana is a writer whose work has appeared in the New York Times, The Weeklings, Narrative.ly, Mr. Beller’s Neighborhood, and Asian American Literary Review. As a visual artist, she has presented her work at the Brooklyn, Bronx, and Queens Museums of Art, the Smithsonian Institution, and has received awards and residencies from Jerome Foundation, Bronx Council on the Arts, Cooper Union, Center for Book Arts, Henry Street Settlement. A Kundiman Poetry fellow, she is working on a novel titled The No.1 Printshop of Lahore and book of collected essays titled Love Letters and Other Necessary Fictions. Read her essay, Indexing A Life, in The Margins.

Rajpreet Heir graduated from George Mason University’s MFA program, where she was the sole recipient of the 2015-2016 Nonfiction Thesis Fellowship. She is an Indian British American and writes about growing up in Indiana. Her family did indeed move there because India was in the name.

Jyothi Natarajan is managing editor at the Asian American Writers’ Workshop where she edits The Margins, an arts and ideas magazine featuring the work of Asian American writers, artists, and thinkers. She was previously an editor at the Caravan magazine, and prior to that worked in book publishing at The New Press.

Ankita Rao is currently an editor at VICE’s science and tech site, Motherboard. In the past she has covered health, gender and change for The New York Times, Quartz, Foreign Policy, Al Jazeera, The Atlantic, Slate and other international publications. She most recently reported from India, where she wrote about health care policy, the evolving status of women’s rights, and the heated 2014 national election. She received grants from the Pulitzer Center, South Asian Journalists Association, and the Fund for Investigative Journalism to pursue long-form projects about rural India.

Sejal Shah’s book manuscript, How to Make Your Mother Cry, was a finalist for both the 2016 The Journal / Ohio University Press Non/Fiction Collection Prize and the 2016 Cleveland State University Poetry Center’s Essay Collection Competition. Previously an assistant professor of English at Marymount Manhattan College, she is the recipient of residencies from Blue Mountain Center, the Millay Colony for the Arts, and New York University, as well as fellowships from the Kenyon Review Writers Workshop, Kundiman, and the Ragdale Foundation. Read her recollections of Agha Shahid Ali in The Margins, as well has her rebuttal to Michael Derrick Hudson.

[Virtual] WORKSHOP: Craft Of Collaboration: Radical Togetherness In Times Of Crises, a Workshop for Asian and Asian Diasporic Poets
Monday, August 22 | 6 PM ET - 8:30 PM ET | Sliding Scale $50- $100 Online | 1 Session | REGISTER HERE! **This is a workshop that prioritizes Asian and Asian diasporic writers. We ask all allies to take a step back and to not register for this workshop.**...
copyright © 2022 Asian American Writers' Workshop