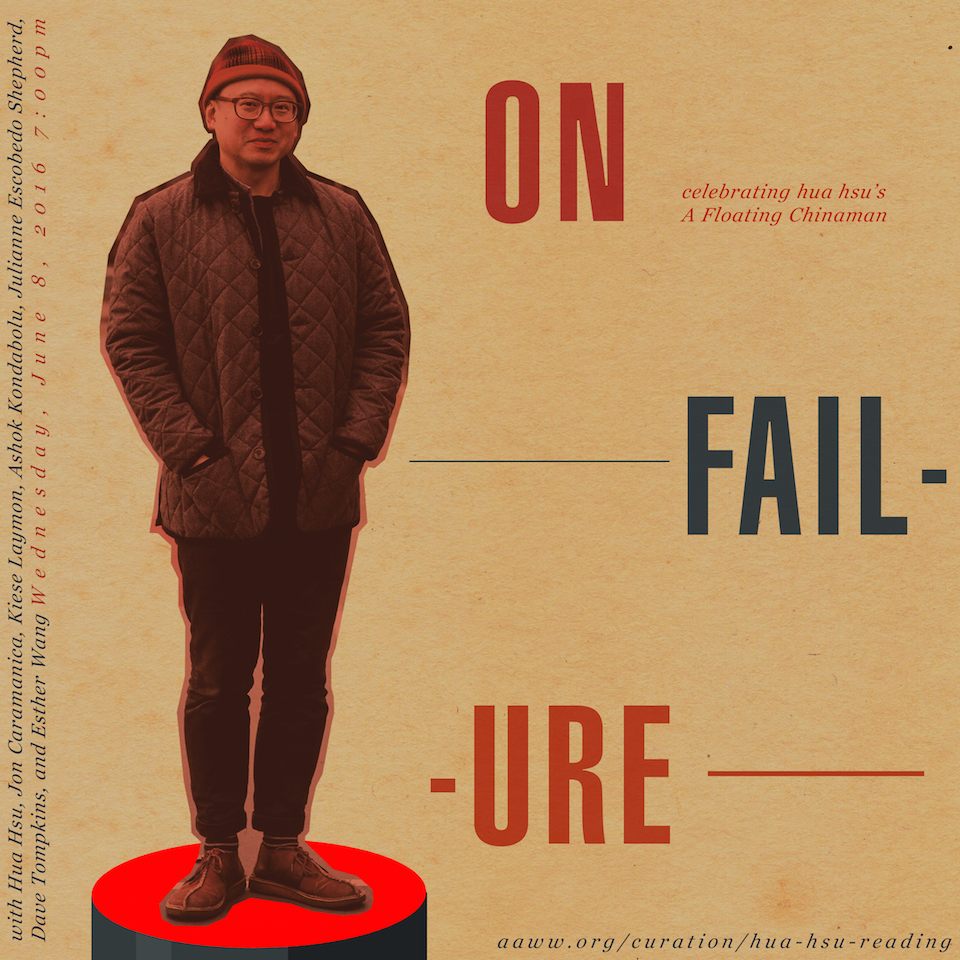 Come through for a special event on ruminating on failure and celebrating the new book by Hua Hsu, A Floating Chinaman: Fantasy and Failure across the Pacific. The book takes its title from a lost manuscript by H. T. Tsiang, an oddball early Chinese immigrant experimental writer whose dismal literary career led him to self-publish his own visionary novels. We’ll start the event with short talks on failure by Jon Caramanica of the New York Times, former Das Racist member Ashok Kondabolu, Jezebel Culture Editor Julianne Escobedo Shepherd, music journalist Dave Tompkins, and Buzzfeed Fellow Esther Wang. Executive Director Ken Chen will then cap off the night interviewing Hua Hsu as they engage in electrifying eye contact.

New Yorker contributor and AAWW Board Member Hua Hsu’s new book A Floating Chinaman (Harvard University Press 2016) explores how Twentieth Century American authors and intellectuals talked about and imagined China. Influenced by a fascination by hip hop beefs, Hua tells the story of the winners (like Pearl Buck and Henry Luce) and the losers, most notably H.T. Tsiang, the avant-garde author of The Hanging on Union Square (read an excerpt in The Margins), who wrote himself into his novels as a pathetic loser and ended up playing a character in a movie based on a novel by his nemesis, Pearl Buck. Hua is an Associate Professor of English at Vassar College and Fellow at the New America Foundation. Read Ashok Kondabolu’s interview with Hua in The Margins.

Ashok Kondabolu was the hypeman “Dap” of the now-defunct rap-group Das Racist. He is also the creator of the art gang and radio show “Chillin’ Island” and is a DJ on the Know-Wave show of the same name. Check out his interviews with Randall Park, Annie Ling, Prashant Bhargava, and others in The Margins.

Dave Tompkins is currently writing a natural history of Miami Bass and archeopsychic bottom. His first book, How To Wreck A Nice Beach, is about the vocoder in war and hip-hop. He has contributed to the New Yorker, Paris Review and Slate and is currently writing an essay about a haunted souvenir warehouse for AUDINT‘s forthcoming Undead/Unsound anthology.

Esther Wang is a 2016 BuzzFeed Emerging Writers Fellow as well as a former AAWW Open City Fellow. She has also been, by turns, a New York City elementary school teacher, a community organizer working in Manhattan’s Chinatown, and a digital strategist for labor rights campaigns. You can find some of her writing at her website.