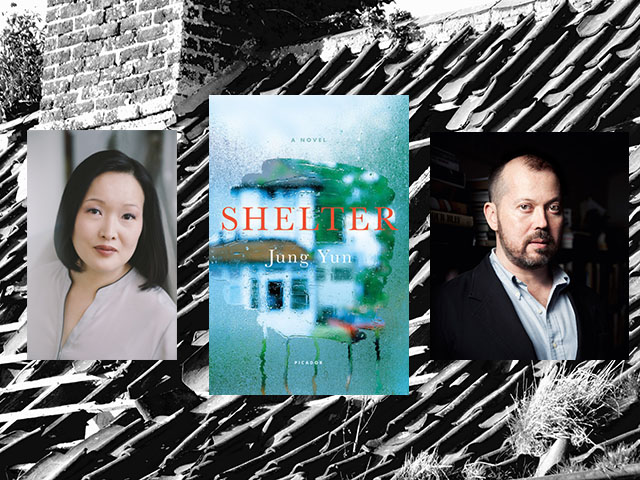 Do you have some good old fashioned Asian American family baggage? Then join us for a special event at Barnes and Noble and celebrate Jung Yun, who’ll discuss her debut novel Shelter with novelist and AAWW homie Alexander Chee. Jung’s novel has been named one of the most anticipated books of the year by The Millions & Brooklyn Magazine, as well as a Barnes and Nobles Discover Great New Writers pick. Mention AAWW when you check out at this special B&N book fair event and we’ll receive 10% of your purchase as a donation!

In Jung Yun’s ironically titled Shelter (Picador 2016), a sudden act of violence throws two generations of the Cho family off kilter. Kyung Cho, a financially strapped young father, must go back and live under his parents’ roof, after he sees his mother standing in her window naked. Can Kyung make peace with his parents, despite being raised by an abusive father? “As Kyung’s situation grows increasingly unstable, he finds himself lapsing into familiar patterns of anger, distrust, and violence…. Kyung’s greatest struggle, in the end, is learning how to see not only his own life but also his parents’ with clarity and understanding” (Publishers Weekly). Likened to Celeste Ng’s Everything I Never Told You, Shelter is a page-turning literary thriller that combines filial trauma and financial crisis. As Alexander Chee writes, “Shelter is a mic-drop of a debut: a story of post-financial crisis America that establishes Jung Yun as a necessary new voice in American fiction.”

She’ll appear in conversation with Alexander Chee, author of Edinburgh (Picador 2001) and his latest work The Queen of the Night (Houghton Mifflin Harcourt 2016). The recipient of the Michener Copernicus Prize, the AAWW Lit Award, and a Whiting Award to name a few, Alexander is also reading with us on Thursday, March 3rd.