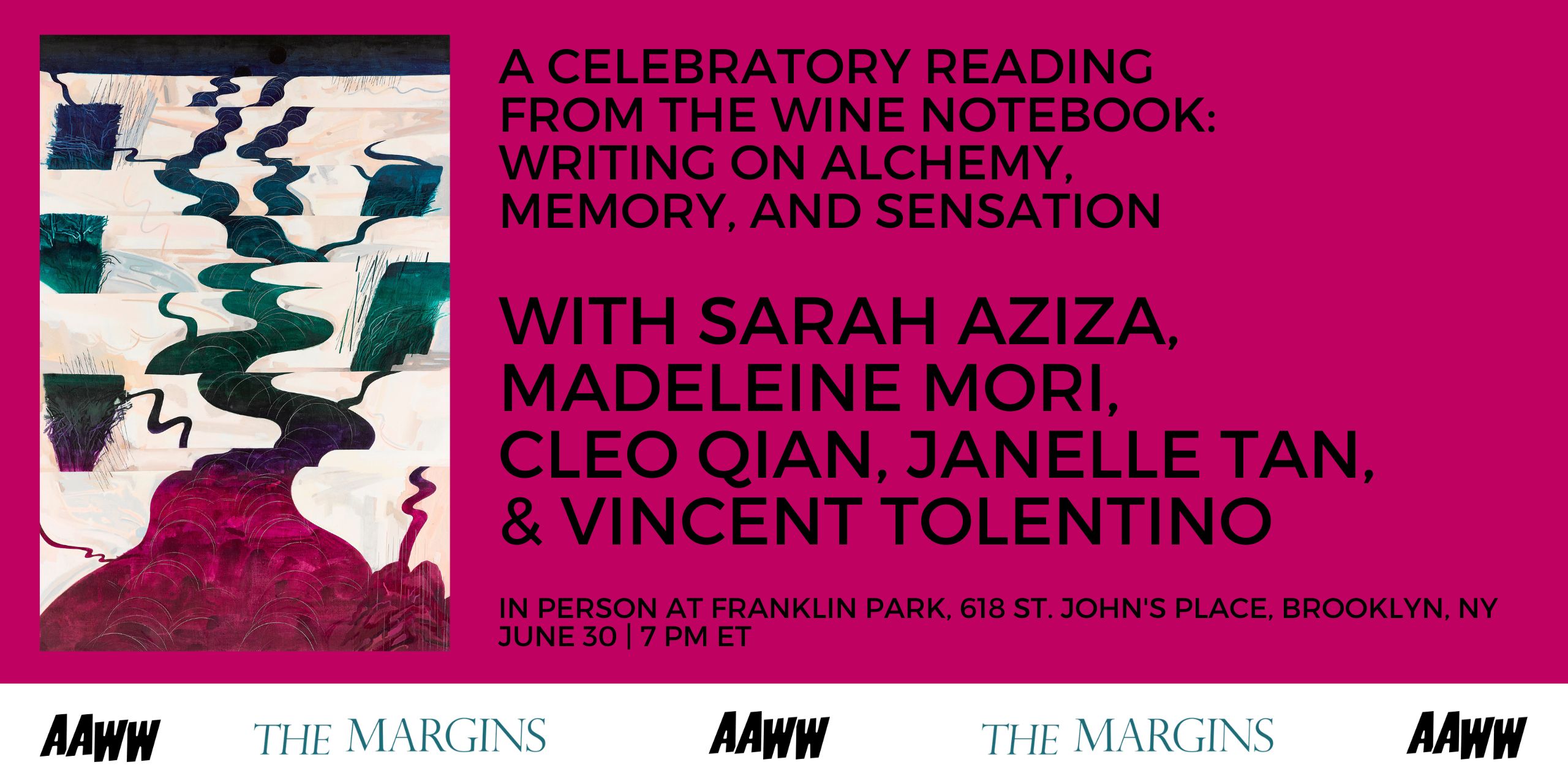 Join us as we celebrate WINE, a portfolio of poetry and prose published on The Margins in June. Edited by writer and former Margins fellow Madeleine Mori, WINE celebrates lyric writing that speaks to wine, perception, and memory. Mori and notebook contributors Sarah Aziza, Cleo Qian, Janelle Tan, and Vincent Tolentino will read from their featured works.

Sarah Aziza is a Palestinian American writer who splits her time between New York City and the Middle East. Her journalism, poetry, essays, and experimental nonfiction have appeared in the New Yorker, the Baffler, Harper’s Magazine, Lux Magazine, the Rumpus, NPR, the New York Times, and the Nation, among others. Previously a Fulbright fellow in Jordan, she is a current fellow at the Sachs Program for Arts Innovation and a 2022 resident at Tin House Writer’s Workshop. She is currently working on her first book, a hybrid work of memoir, lyricism, and oral history exploring the intertwined legacies of diaspora, colonialism, and the American dream.

Madeleine Mori is a Japanese American writer, born and raised in the San Francisco Bay Area. She earned a BS in winemaking from Cal Poly San Luis Obispo and an MFA from New York University. Her poetry has appeared or is forthcoming in jubilat, DIAGRAM, the American Poetry Review, the Yale Review’s “Poem of the Week” series, and the Common, among other publications. She has received fellowships from the Community of Writers, the NYU Provost, and the Asian American Writers’ Workshop, where she was a 2021 Margins Fellow. She lives in Brooklyn.

Cleo Qian is a writer based in New York.

Janelle Tan was born in Singapore. Her poems appear in Poetry, Michigan Quarterly Review, Split Lip, Muzzle, Cincinnati Review, and elsewhere. Her personal essays appear in The Margins and the Southampton Review. She lives in Brooklyn.

Vincent Tolentino is a writer and educator from Los Angeles, based in Brooklyn. He is an MFA candidate and instructor in creative writing at New York University, a faculty associate in narrative medicine at Columbia University, and a museum educator at the Frick Collection. He has received fellowships from the Yale Center for British Art, the Martha’s Vineyard Institute of Creative Writing, and Sulo: The Philippine Studies Initiative at NYU.

[LIVE] A Celebratory Reading from the Wine Notebook: Writing on Alchemy, Memory, and Sensation