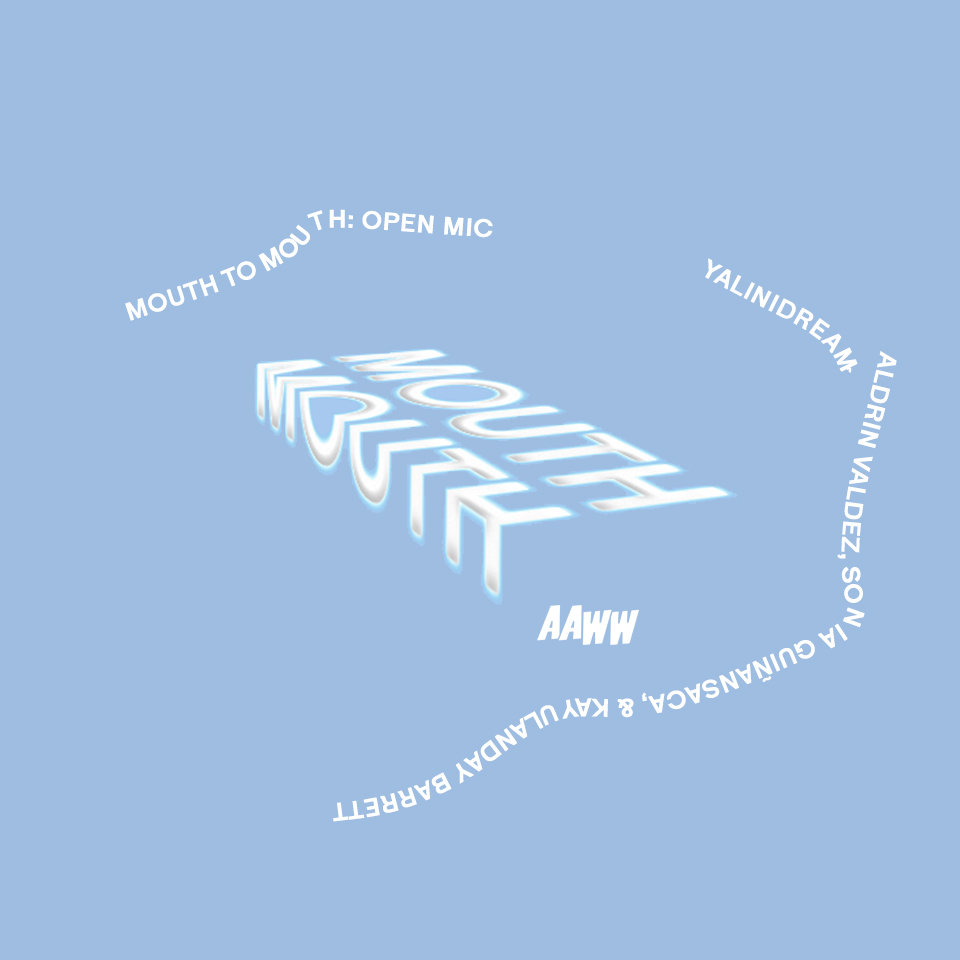 Mic Check! Are you a writer? Come share your work at our next edition of our open mic, Mouth to Mouth. Hosted by AAWW Fam poets Sonia Guiñansaca and Kay Ulanday Barrett, this edition of Mouth to Mouth features YaliniDream and Aldrin Valdez. Mouth to Mouth seeks to provide a safe community space for QTPOC and rising migrant artists.

Aldrin Valdez is a Pinoy painterpoet. They grew up in Manila and Long Island and currently live in Brooklyn. Aldrin studied at Pratt Institute and the School of Visual Arts. They have been awarded fellowships from Queer/Art/Mentorship and Poets House. Their work has been published in Art21 Magazine, ArtSlant, BRIC Blog, The Cortland Review, In the Flesh Magazine, and Uncompromising Tang.

YaliniDream is a performance artist, activist, and facilitator. She conjures spirit through her unique blend of poetry, theater, song, and dance– reshaping reality and seeking peace through justice in the lands of earth, psyche, soul, and dream. One of the South Asian American community’s most prominent performance poets, YaliniDream has performed in numerous venues ranging from NYC’s Lincoln Center and Dance Theater Workshop to subway cars to street protests to universities to independent theaters to the hottest clubs in the New York underground. YaliniDream was a 2006 Mid-Atlantic Artists in Community Fellow, a panelist for the Leeway Foundation’s 2007 Transformation Awards, a 2008 Urban Arts Initiative Fellow & currently a recipient of the Jerome Foundation’s Travel & Study Award in Literature.

Kay Ulanday Barrett is a poet, performer, and educator, navigating life as a disabled pilipinx amerikan transgender queer in the U.S. with struggle, resistance, and laughter. When The Chant Comes (Topside Heliotrope 2016) is their first collection. K. has been invited to The White House, Princeton University, UC Berkeley, The Lincoln Center, Queens Museum, and The Chicago Historical Society to name a few. They are a fellow of both The Home School and Drunken Boat. Their contributions are found in PBS News Hour, Lambda Literary, RaceForward, Foglifter, The Deaf Poets Society, Poor Magazine, Fusion.net, Trans Bodies/Trans Selves, Winter Tangerine, Make/Shift, Third Woman Press, The Advocate, and Bitch Magazine. You can read their interview with PBS on poetry as a testimony to survival here.

NOTE ON ACCESSIBILITY
*The space is wheelchair accessible. No stairs. Direct elevator from ground floor to 6th floor.
*We strongly encourage all participants of the space/event to be scent-free.
If you all have any other specific questions about accessibility, please email Tracy Wong at twong [at] aaww.org with any questions on reserving priority seating.