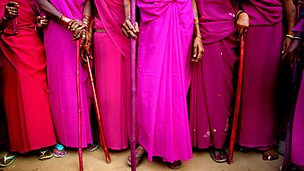 Annapurna Potluri, author of The Grammarian, Amana Fontanella-Khan, author of Pink Sari Revolution, and artist Tatyana Fazlalizadeh join us for readings and conversation about women’s lives and political power in a fictional India of this time last century and a contemporary world that is grappling with its response to sexual violence.

Pink Sari Revolution, “a fast-paced, powerful, and sympathetic portrait of a victim and her subaltern champion” [New York Journal of Books] takes up the timely story of Sampat Pal and the Gulabi Gang, an all-woman grassroots vigilante organization, made up of women not of the privileged class, that exacts justice from corrupt police officers and abusive husbands and runs vocational centers for women. In The Grammarian, “written in supple, sensuous prose that aches with memory and regret” [Shelf Awareness] a woman enters the currents of political activism after an innocent, one-sided love leads her family to cast her out. Visual artist Tatyana Fazlalizadeh talks about her powerful portraits of unsmiling women in Stop Telling Women To Smile, a public art project addressing gender-based street harassment.

Join us as we trace the thread connecting stories of women who seize hope and public space when it isn’t freely given. The conversation will be moderated by journalist Vikas Bajaj.

Pink Power: A Reading and Conversation with Amana Fontanella-Khan and Annapurna Potluri