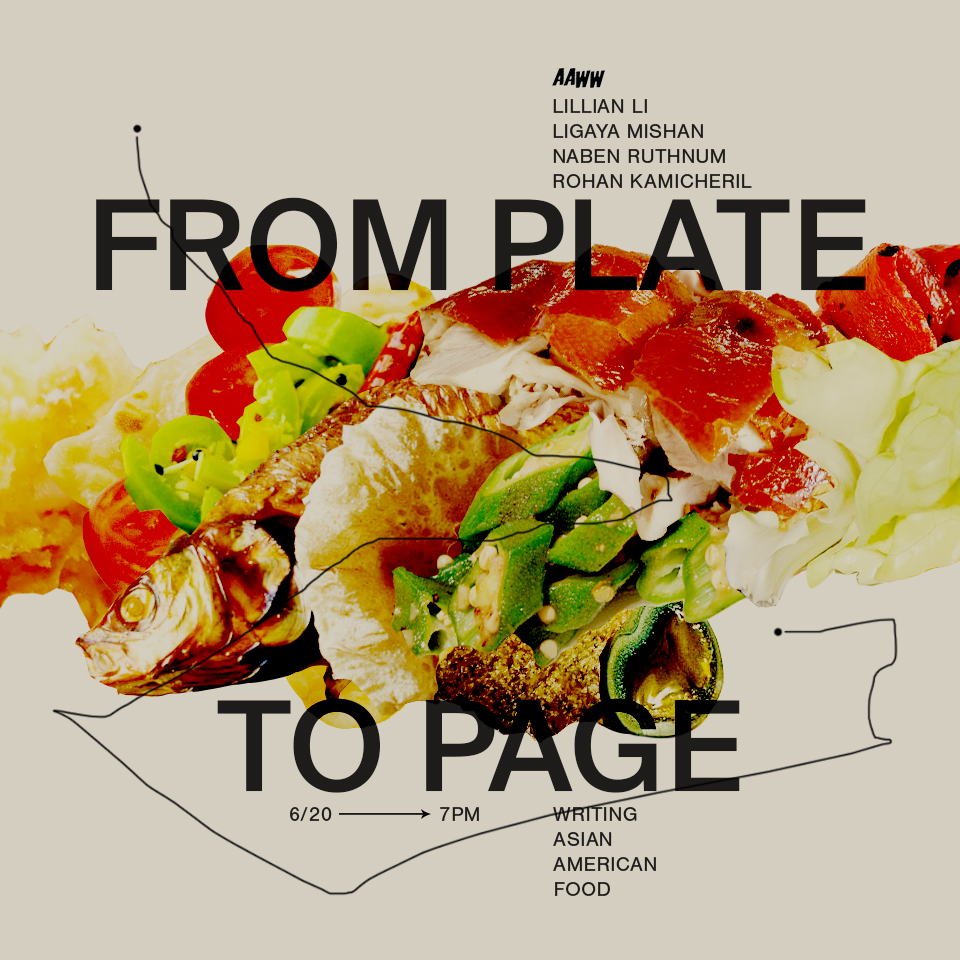 Join us for an event that uses food as a starting point to explore the world of the restaurant, Asian American immigrant life, and how histories of migration and colonialism shape our plates. We’ll hear from Lillian Li, whose debut novel Number One Chinese Restaurant delves into the world of family drama behind the Beijing Duck House in Rockville, Maryland; New York Times Hungry City columnist Ligaya Mishan, whose essential piece on the rise of Asian American food in the restaurant industry investigates its newfound critical embrace, and its effect on Asian American chefs; and Toronto-based Naben Ruthnum, whose funny and sharp memoir-essay Curry analyses the canon of “currybooks,” unraveling the nostalgic sentimentality around one of the most iconic staples of Asian food and its connection to the Indian diasporic experience. Moderated by chef and Tiffin editor Rohan Kamicheril.

Lillian Li’s debut novel Number One Chinese Restaurant (Henry Holt, 2018) chronicles mass growing pains among the staff of a thriving, local Chinese restaurant, with familial tensions comically dark cultural criticism, and an underlying, more profound sense of grief. Li received her BA from Princeton and her MFA from the University of Michigan, where she was the recipient of a Hopwood Award in Short Fiction. Her widely acclaimed short fiction has appeared in Guernica, Granta, Bon Appetit, Jezebel, and Glimmer Train, where she won Glimmer Train’s 2015 New Writer Award. Born in the D.C. metro area, she now resides in Ann Arbor, Michigan.

Ligaya Mishan is a columnist for New York Times’ “Hungry City”, which explores the great unsung restaurants of New York with a smart curiosity and vitality. Her writing career has taken her from a Cornell MFA in poetry to reviewing books for the New Yorker to her current position, where she utilizes her background in many genres to weave together narrative of the lives of immigrants and entrepreneurs and their menus. She now lives in New York.

Naben Ruthnum’s Curry (Coach House Books, 2017) cultivates dashing cultural critique, sharp literary analysis, and a hint of diasporic memoir into a well-seasoned exploration of the implications of curry. He has been awarded the 2013 Journey Prize for his short fiction and has previously written for the National Post books column. His stories and essays have appeared in Globe and Mail, Hazlitt, and the Walrus. His crime fiction has been published in Ellery Queen’s Mystery Magazine and Joyland, and his pseudonym Nathan Ripley’s chilling crime thriller Find You In The Dark debuted in April of 2018. Check out his interview Curry and playing with the tropes of South Asian literature in The Margins.

Rohan Kamicheril is a writer, editor, and chef. Founder and editor of online food journal Tiffin, Rohan showcases his literary proficiency through a series of interviews, recipes, and stories of international travel. His food-oriented, journalistic writing has appeared in Gastronomica, The Margins, Hemispheres, Asymptote, and elsewhere. He was the editor of Words Without Borders’ literary anthology The Wall in My Head, which commemorated the twentieth anniversary of the fall of the Iron Curtain through a collection of written and visual work. He currently lives in New York City.