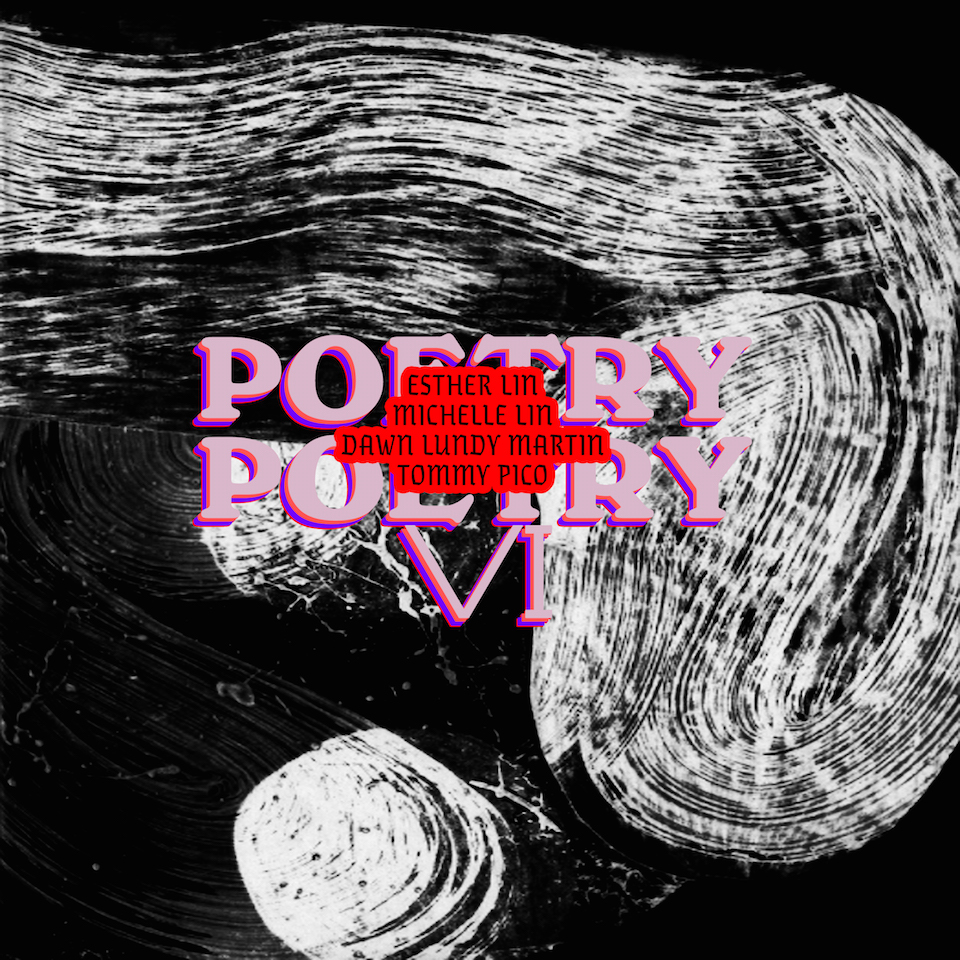 Join us for the sixth session of Poetry Poetry and hear readings by four thrilling poets: Esther Lin, Michelle Lin, Dawn Lundy Martin, and Tommy Pico. These poets are pushing the edges of poetic theory, form, and politics, interrogating the legacies of Asian American immigration, queer identity, settler colonialism, and racial trauma. If you can’t make it, make sure to watch our livestream on our Facebook page.

Esther Lin was born in Rio de Janeiro, Brazil, and lived in the United States as an undocumented immigrant for 21 years. She is a 2017–19 Wallace Stegner Fellow, winner of the Crab Orchard Review’s 2018 Richard Peterson Poetry Prize, recipient of the inaugural Undocupoets fellowship, and was a 2015 Emerging Poet at Poets House. Her poems have appeared or are forthcoming in Adroit, Copper Nickel, Crazyhorse, Drunken Boat, the Missouri Review, Vinyl, and elsewhere.

Michelle Lin’s debut poetry-collection, A House Made of Water (Sibling Rivalry Press 2017), is a dreamlike exploration of daughterhood, exile, and Asian American identity. As Cathy Lihn Che writes: “Elusive, but tactile, the collection wrestles beautifully with trauma and our inherited stories, seeking transformation throughout. What I love most is the intimacy of detail: the difficult weight of memory, the exquisite relief of disclosure.” Michelle’s poems can be found in Apogee, Asian American Literary Review, and on AAWW’s The Margins. A Kundiman Fellow, Michelle serves as Poetry Reader for Twelfth House Journal and works for the RYSE Youth Center.

Poet and activist, Dawn Lundy Martin cofounded the Third Wave Foundation and the post-theorist Black Took Collective. She is also the author of Good Stock Strange Blood (Coffee House Books 2016), of which Anna Moschovakis writes: “Martin’s tender and defiant gesture in these unshakable poems is to open and open, relentlessly, into rage and desire, into blackness and ‘blackness’ … into an AfroFuture where ‘existence inside of both loss and abundance’ might no longer feel impossible… I want everyone … to read this book.” Her other collections include Life in a Box is a Pretty Life (Nightboat Books 2015), the Nightboat Books Prize-winning Discipline (Nightboat 2011), and A Gathering of Matter/A Matter of Gathering (University of Georgia 2007), a Cave Canem winner and finalist for the Lambda Literary Award. The winner of the May Sarton Prize, Martin has taught at the University of Pittsburgh, The New School, and Bard College. Listen to her read three poems here.

Tommy Pico’s newest poetry collection Nature Poem (Tin House 2017) explores Teebs?a queer American Indian hipster-poet who’s more in love with the big city than stereotypical fantasies of nature. A vital intervention into pastoral poetry, the book engages with the legacies of settler colonialism and manifest destiny and also chronicles Teebs’s attempt to engage with nature through his own voice. Alexander Chee calls the book a “thrilling punk rock epic that is a tour of all we know and can’t admit to,” and says that Tommy “is determined to blow your mind apart, and . . . you should let him.” The book was named one of the year’s most anticipated books by Publishers Weekly and BuzzFeed. The founder and editor-in-chief of the antiracist/queer collective birdsong, Tommy’s previous books include IRL (Birds LLC 2016) and absentMINDR (VERBALVISUAL, 2014), the first chapbook APP published for iOS mobile/tablet devices. A Queer/Art/Mentors inaugural fellow and a Lambda fellow, Tommy was originally from the Viejas Indian reservation of the Kumeyaay nation and now lives in Brooklyn, where he co-curates the reading series Poets With Attitude.