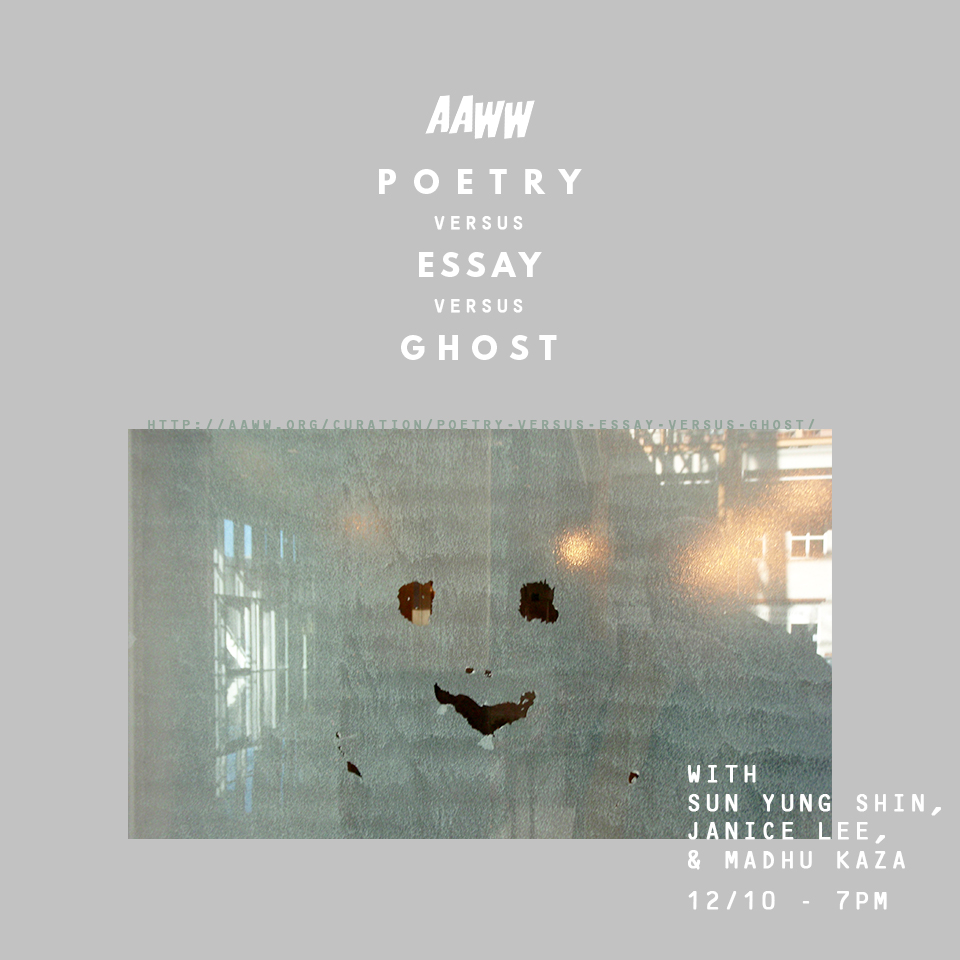 AAWW Literary Award Winner Sun Yung Shin’s new book Unbearable Splendor (Coffee House 2016) explores poetry as essay–poetry as a way to hover over the uncanny, sci-fi orientalism, Antigone, cyborgs, Borges, disobedience. A Seoul-born Korean adoptee, Sun Yung is the author of Rough, and Savage (Coffee House Press, 2012) and Skirt Full of Black (Coffee House Press, 2007) received the Asian American Literary Award for Poetry. She is the co-editor of Outsiders Within: Writing on Transracial Adoption (South End Press, 2006) and the author of bilingual Korean/English illustrated book for children Cooper’s Lesson (Children’s Book Press, 2004). This is what Bhanu Kapil writes about Unbearable Splendor: “To graph the immigrant, the exile and ‘pseudo-exile,’ as ‘a kind of star.’ To perform childhood. ‘Descent upon descent.’ To write on ‘paper soaked in milk.’ Unbearable Splendor is a book like this, that is this: the opposite or near-far of home. What is the difference between a guest and a ghost? What will you feed them in turn? I was profoundly moved by the questions and deep bits of feeling in this gorgeous, sensing work, and am honored to write in support of its extraordinary and brilliant writer, Sun Yung Shin.” Read an excerpt from Unbearable Splendor on The Margins.

Janice Lee’s new book The Sky Isn’t Blue (Civil Coping Mechanisms, 2016) explores the poetics of space to perform a dialogue with the dead. As Douglas Kearney writes, “These disconcerted essays observe our overrun absences—the monumental bleakness of the American West, the desert of the empty bed. Still, Lee’s frequently audacious declarations accompany a mournful narrative of loneliness. The ‘you’ Lee addresses throughout often seems the author’s lover, gone, and thus us—not with Lee, but with her collection of lustrous melancholy, an elegy for her mother and for the rest of us, who will fall to hard weather.” The LA-based Executive Editor of Entropy magazine, Janice also wrote KEROTAKIS (Dog Horn Press, 2010), Daughter (Jaded Ibis, 2011), Damnation (Penny-Ante Editions, 2013), and Reconsolidation (Penny-Ante Editions, 2015),

Born in Andhra Pradesh, India, Madhu Kaza is a writer, educator, translator and artist based in New York City. Her translations from Telugu include works by contemporary feminist writers Volga and Vimala. She is editing the Spring 2017 issue of Aster(ix) entitled “Kitchen Table Translation: Diaspora, Migration, Exchange.” She has asked “What is a television?” She rode the American rails when her father when into an Intensive Care Unit. And in X Poetics, she asks, “What if I wandered through France and Italy not in a posture of submission, and not as a student of Western Civilization?”

Poetry Versus Essay Versus Ghost