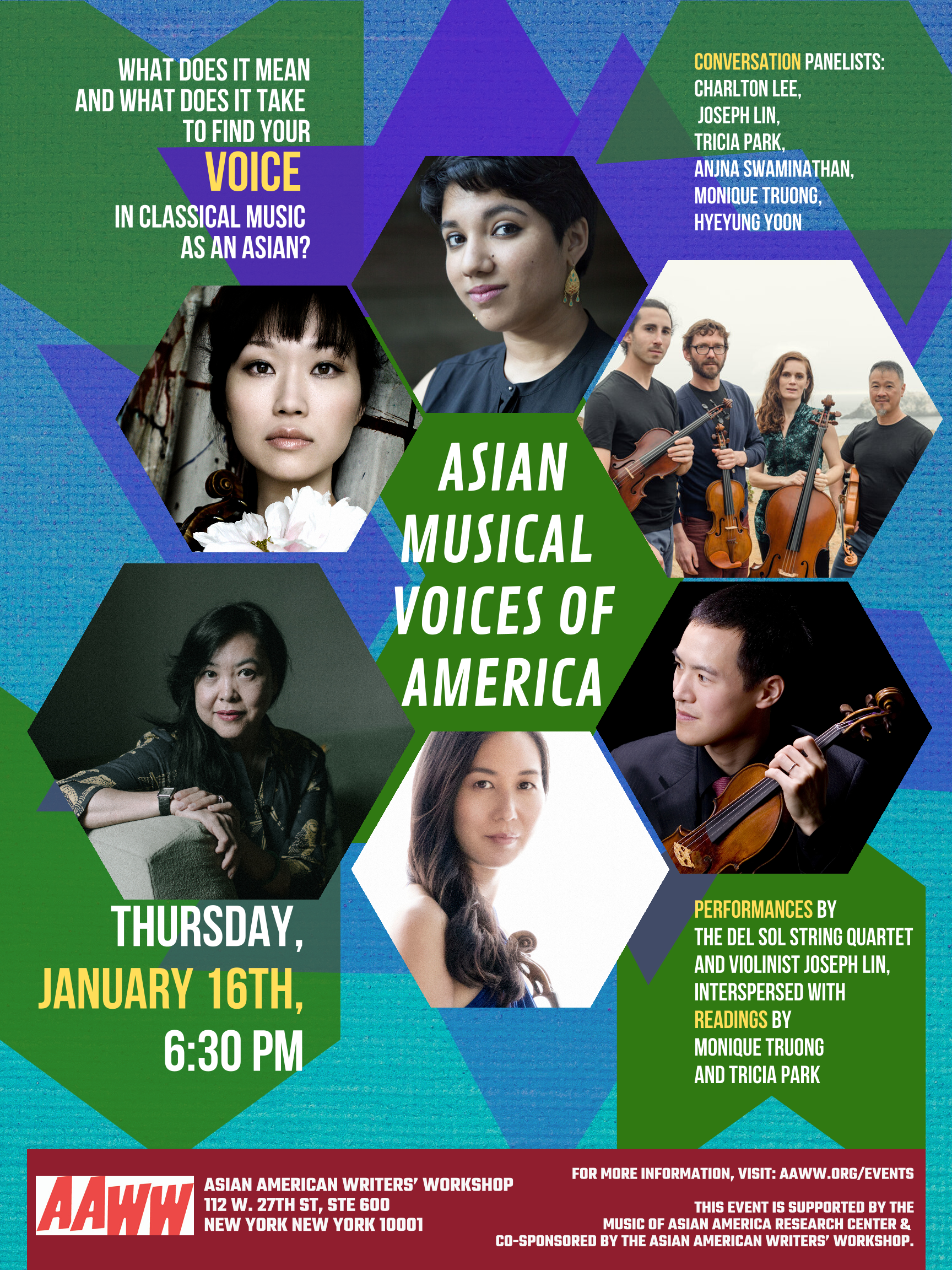 Despite a presence in the world of classical music, the experiences of Asian classical musicians often go unexplored. The Asian Musical Voices of America is a platform where these stories can be shared by & for Asian diasporic musicians living & working in the United States. This event is the first gathering & will take place at the Asian American Writers’ Workshop, a literary nonprofit that celebrates Asian diasporic literature & storytelling.

The panel following the performances will respond to the question, “What does it mean & what does it take to find your voice in classical music as an Asian?” Panelists will include lead organizer & founder of Asian Musical Voices of America, Hyeyung Yoon, a violinist of the former Chiara String Quartet. Hyeyung will be joined by Charlton Lee of the Del Sol Quartet, violinist Joseph Lin, violinist & writer Tricia Park, Monique Truong, author & librettist, & multidisciplinary artist & composer Anjna Swaminathan.

RSVP HERE! $5 Suggested Donation at the Door.
No one will be turned away for lack of funds. All donations go to AAWW public programs. The Asian American Workshop is a national nonprofit dedicated to the creation, development, publication, & dissemination of Asian American literature.

HYEYUNG YOON was a member of the Chiara Quartet which celebrated its last season in 2018. They launched “Chamber Music in Any Chamber,” a project that brought the ensemble to over 50 clubs and bars across the U.S. and performed by heart, including the Complete String Quartets of Béla Bartók at the Ravinia Festival in 2016. Discography include recording of Jefferson Friedman’s String Quartets, which was nominated for Grammy Award in 2011, and Bartók by Heart, the Complete String Quartets of Béla Bartók, released in 2016. She recently traveled to South Korea in Spring 2019 to research folk performances practices and was appointed as the director to Chamber Music Accord, Hartt School’s new summer chamber music program for high school students.

CHARLTON LEE is the founding violist and artistic director of the Del Sol Quartet.  In addition, Lee is a sought-after educator, chamber music coach, and jurist.  He created and performed music for the award winning short film, “Red, White, Blue, and Yellow,” and has also collaborated with various dance companies, including Stephen Pelton, Benjamin Levy, and Garrett/Moulton.  He received a Bachelor’s Degree in Applied Mathematics and Physics from the University of California, Berkeley and a Master’s Degree in Music from the San Francisco Conservatory of Music. Consequently, he is likely the only person to have published articles in both Physics Review Letters and Strings Magazine.  Outside the quartet, he is a 20th generation disciple of martial art Chen Taiji, an avid skier and chef.

Acclaimed performer & teacher JOSEPH LIN appears regularly in the finest halls, festivals, and conservatories throughout the world. Known for his probing artistry & versitility, Joseph continues to embrace new explorations as his voice evolves with depth & humanity. He was the first violinist of the Juilliard String Quartet from 2011-2018 & continues to teach violin & chamber music at the Juilliard School. Joseph’s 2019-2020 projects include a collaboration with Robert Levin presenting Beethoven & Schubert on period instruments, touring with Musicians from Marlboro, presenting collaborations with Juilliard students at Chamberfest, & performances of Bartók’s Second Violin Concerto. For Beethoven’s 250th birthday, Joseph will present ten Beethoven Sonatas with pianist Helen Huang while also leading a series of performances by Camerata Pacifica of Beethoven’s late String Quartets. A demonstrated leader in the world of classical music, Josephs awards & honors include 1st Prize in the Concert Artists Guild International String Quartet Competition in 1996, a Presidential Scholar in the Arts, & more.

ANJNA SWAMINATHAN is a queer multidisciplinary artist, composer, violinist, vocalist, writer, theatre artist, and dramaturg. As an artist with a passion for sociopolitical work, community building, and critical consciousness, Anjna’s artistic practice is an extension of her activist spirit. Informed by her rigorous training in the Carnatic and Hindustani music traditions of India, Anjna creates in New York’s vibrant creative music and improvisatory scene, in hybrid classical compositional work, and in her own multidisciplinary projects. Since 2018, Anjna has been under the compositional mentorship of Gabriela Lena Frank with whom she is exploring the creative possibilities of using Western Classical notation as a mode of communication for her deeply rooted Indian classical compositional and improvisational ideas.

TRICIA PARK The recipient of an Avery Fisher Career Grant, Tricia Park has performed as a soloist and chamber musician on five continents and is the producer and host of a podcast called “Is it Recess Yet? Confessions of a Former Child Prodigy”. Tricia is the Founding Artistic Director of MusicIC, a chamber music festival that explores the connections between music and literature. She is the founding member of the award-winning Solera Quartet whose debut album, Every Moment Present, was recently praised by the New York Times as “intoxicating.” She is also half of the violin-fiddle duo, Tricia & Taylor, and her writing has appeared in Cleaver and Alyss Magazines as well as F Newsmagazine. Tricia received her Bachelor and Master of Music from The Juilliard School and her Master of Fine Arts in Writing from the School of the Art Institute of Chicago.

* The space is wheelchair accessible. No stairs. Direct elevator from ground floor to 6th floor.

* We strongly encourage all participants of the space/event to be scent-free.