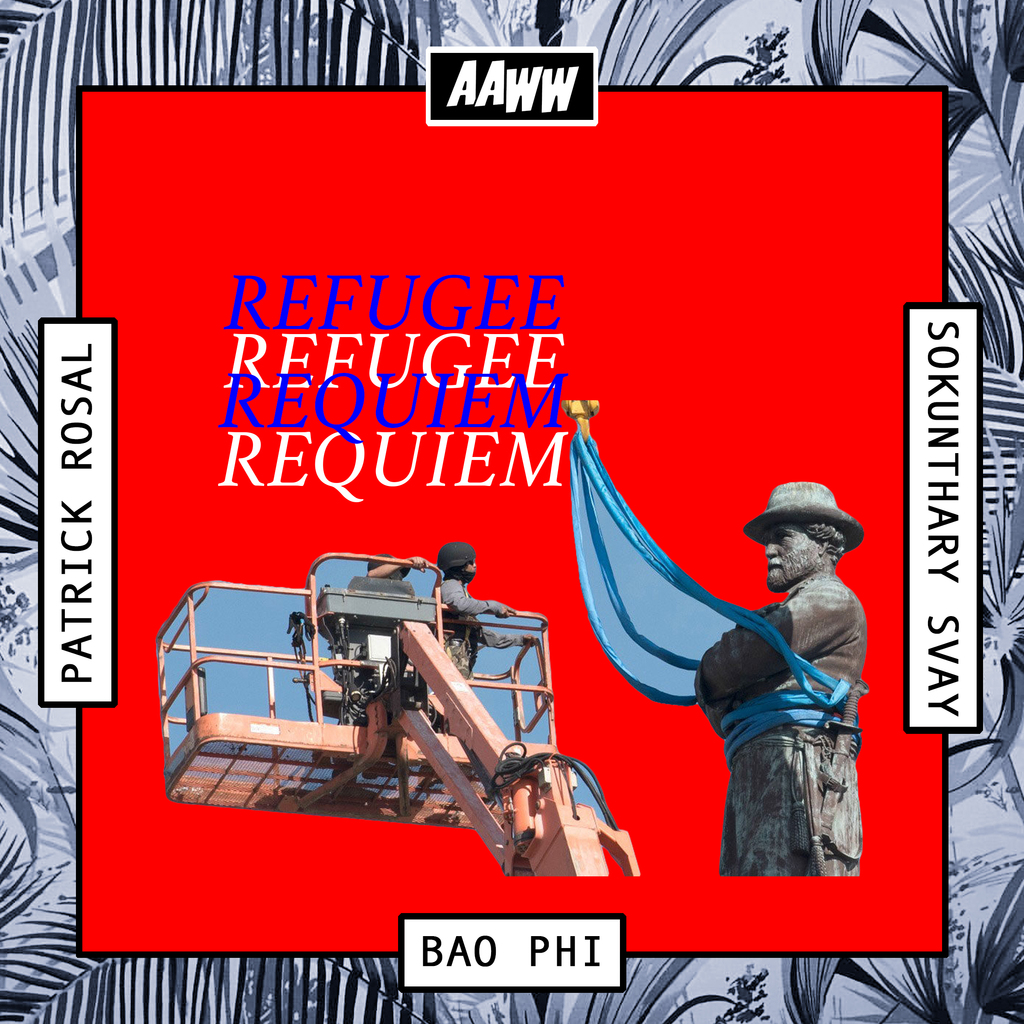 The struggle to topple Confederate statues around the country is a challenge to rewrite the textbook version of American history we’re supposed to believe in. Poets Patrick Rosal, Bao Phi, and Sokunthary Svay confront nationalist mythology with lyrical odes to the America we struggle against, and the one being built through struggle. Patrick Rosal—who the Academy of American Poets honored for writing the best book of poetry of the year—uncovers forgotten multi-racial histories through his family’s journey from the Phillipines to Brooklyn. Bao Phi and Sokunthary Svay trace their arrival into Minneapolis and the Bronx as refugees. They speak into existence defiant new American imaginaries, inspired by hip hop and the invisibilized Asian American urban poor. Come through!

Bao Phi’s latest book, Thousand Star Hotel (Coffee House Press, 2017) chronicles the poet’s personal history as a Vietnamese refugee and a father and the silence around racism, police brutality, and the invisibility of the Asian American poor. Viet Thanh Nguyen writes that the book combines Bao’s trademark blend of “passion, politics, and poetry.” Tyehimba Jess writes, “Bao’s poems haunt our collective American psyche until a ‘new region of the tongue is discovered.’” Bao is a multiple-time Minnesota Grand Slam poetry champ and a National Poetry Slam finalist who has been on HBO’s Russell Simmons Presents Def Poetry. His first collection of poems, Sông I Sing, was published by Coffee House Press in 2011, and he recently released his first children’s book, A Different Pond, illustrated by Vietnamese illustrator and graphic novelist Thi Bui. You can read “Document,” an excerpt from Thousand Star Hotel in The Margins.

Patrick Rosal’s Brooklyn Antediluvian (Persea Books, 2016), received the 2017 Academy of American Poets’ Lenore Marshall Poetry Prize, honoring the most outstanding book of poetry of the year. Judge Rigoberto González wrote that the book “sings as both lament and celebration: it connects histories, landscapes, and stories of times past to the joyous rhythms of the present.” Brooklyn Antediluvian is Patrick’s fourth book, and he is currently at work on a prose book about his mother’s arrival during the Civil Rights Era and the linkages between Filipino immigration and African American History. He teaches creative writing at Rutgers University-Camden and lives in Philadelphia.

Sokunthary Svay’s forthcoming Aspara in New York (Willow Books, 2017) is her first collection of poetry. Sokunthary uses the aspara, the mythical deity that decorates Khmer temples, to mark the transplanting of old world Cambodian tradition into her adopted home of the Bronx. Sokunthary was born in a refugee camp in Thailand shortly after her parents fled Cambodia after the fall of the Khmer Rouge regime. She is a Pushcart-nominated Khmer writer and musician, and the poetry editor for Newtown Literary, the only journal for the borough of Queens. She recently published a selection of poems in Apogee, and wrote a personal essay about the Khmer Rouge and inherited trauma in her Cambodian family in The Margins.

This event is cosponsored by A/P/A NYU.