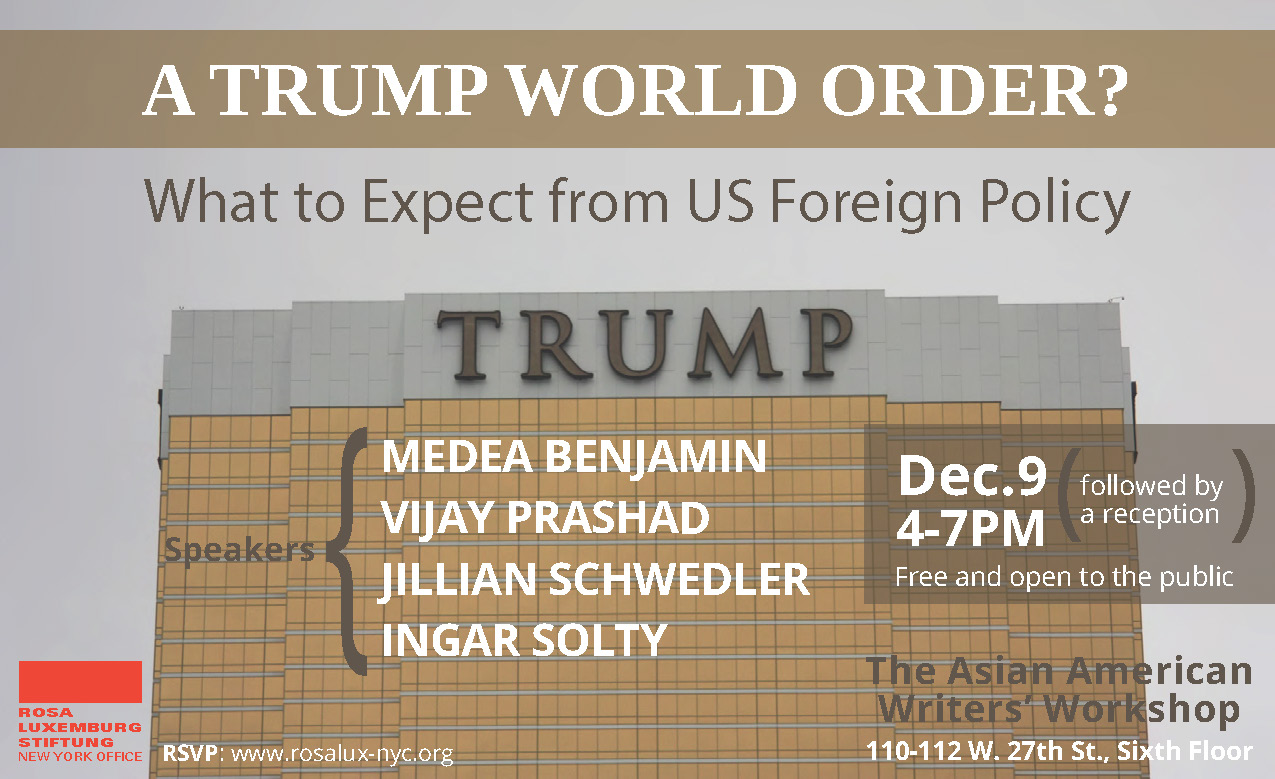 AAWW is proud to rent its space for the following program organized by Rosa Luxemburg Stiftung.

Donald Trump’s shocking election victory presents itself not only as a national catastrophe for the American people, but as a threat to the entire globe. While Trump’s views on foreign policy are usually described as ill-informed and plagued with contradictions, he has consistently supported a global role for the United States completely different from the bipartisan consensus that has dominated US foreign policy for at least 60 years. Join Rosa Luxemburg Stiftung (RLS–NYC) for a panel discussion on future President Trump’s impact in the global arena. Focusing on different regions, look at what to expect in terms of strategic alliances, shifting partnerships, conflict resolution, multilateralism, environmental policies, and more. This panel will bring together international and American experts to analyze the implications of a Trump Presidency: Medea Benjamin as moderator, Vijay Prashad on the global South, Jillian Schwedler on the Middle East, and Ingar Solty on Europe. How might the new administration reshape the current world order and what should the progressive global community expect in coming years? Equip yourself with the tools to help make sense of the world we live in and to understand the struggle for a new system of global governance.

Vijay Prashad is a professor of South Asian History at Trinity College, Connecticut. He is the author of a number of books, as well as of the RLS–NYC study, Neoliberalism with Southern Characteristics: The Rise of the BRICS.

Jillian Schwedler is a professor of political science at Hunter College and CUNY Graduate Center. She is a member of the editorial committee of the Middle East Research and Information Project (MERIP), publishers of the quarterly Middle East Report.

Ingar Solty, of RLS’s Institute for Critical Social Analysis in Berlin, focuses on peace and security issues. His article on the Quebec student strike, Canada’s “Maple Spring”, is available on the RLS–NYC website.

Rosa Luxemburg Stiftung is an internationally operating, progressive non-profit institution for civic education affiliated with Germany’s “Die Linke” (Left Party). Active since 1990, the foundation has been committed to the analysis of social processes and developments worldwide. The foundation’s New York Office, serves two major tasks: to work on issues concerning the United Nations, including collaboration with people and political representatives from the Global South, and to work with North American (U.S. and Canadian) progressives in universities, unions, social movements, progressive institutions, and think tanks.

OPEN TO THE PUBLIC
RESERVE A SEAT!

A Trump World Order? What to Expect from US Foreign Policy