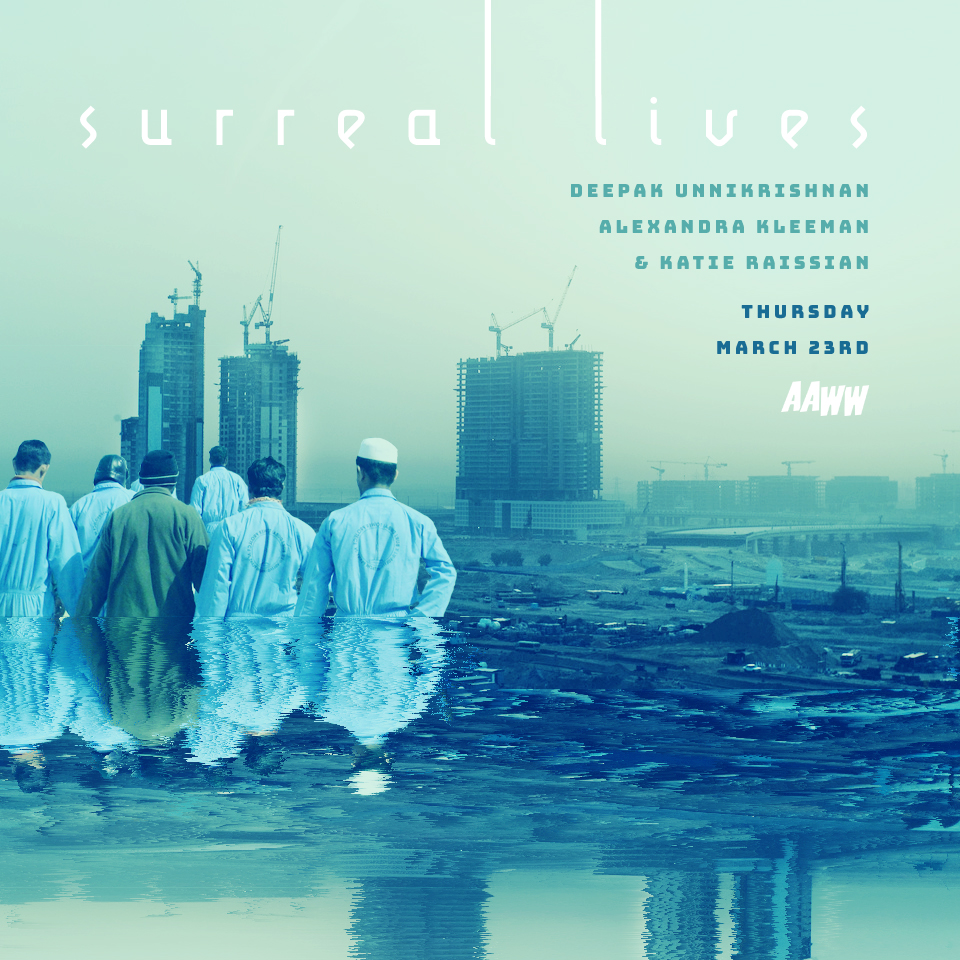 Do you feel like you’re living in a surreal dystopia? Well, we’ve got your guidebook. Come hear critically acclaimed authors Deepak Unnikrishnan and Alexandra Kleeman read from new story collections. Their strange inventions will make perfect sense to anyone who feels like they don’t belong in our fantasia of global capitalism, gulf labor, and American culture. They’ll chat about life and death, home and migration with Grove Atlantic editor Katie Raissian.

The linked stories in Deepak Unnikrishnan’s Temporary People (Restless Books 2016) look at the stateless guest workers of the United Arab Emirates through a fantastic, surrealistic lens. You might call it Gulf labor via George Saunders–or the Bedoon experience as imagined by Bruno Schulz. Here a migrant eats and then shape-shifts into a passport. A woman has a job out of a fable of 21st century global capitalism: she mends the construction workers who’ve fallen from the high-rises of Dubai and Abu Dhabi. Also told in three sections, Temporary People won the Restless Books Prize for New Immigrant Writing. The judges–Maaza MEngiste, Javier Molea, and Ilan Stavans–wrote: “in giving substance and identity to the voiceless and faceless masses of guest workers in the United Arab Emirates, he not only calls attention to this very particular injustice, but also highlights the disturbing ways in which ‘progress’ on a global scale is bound up with dehumanization…. This is a writer grappling not only with the plight of ‘temporary people,’ but also with the realities of a new unruly twenty-first-century global English.” Read Deepak’s lyrical ruminations on Abu Dhabi and New York in AAWW’s Open City.

Set against a technicolor backdrop of futuristic cults, cartoons, and Disappearing Dad Disorder, Alexandra Kleeman’s You Too Can Have a Body Like Mine gets high on the sweltering mania of the American city. Her newest book The Intimations collects twelve stories that diagram the three stages of existence: birth, life, and death. As avant-garde legend Robert Coover writes: “Perhaps the most distinctive stories in Alexandra Kleeman’s Intimations are the brilliantly crafted nightmares about the dissolving of reality, but there is also everything here from an elegant Victorian tale of a feral child to a witty disquisition on the mouths of angels….. This is ambitious imaginative writing of the highest quality.”

Katie Raissian is an associate editor at Grove Atlantic, where she edits literary fiction. Her authors include Colin Barrett, who was a National Book Foundation 5 Under 35 and winner of the Guardian First Book Award and the Frank O’Connor International Short Story award; Anna Noyes, author of the collection Goodnight, Beautiful Women (June 2016); and Bethany Ball (2017). Katie is the publisher and editor in chief of Stonecutter Journal, an annual magazine of art and literature which focuses on publishing international writers and artists alongside US-based ones. Stonecutter has featured work by John Ashbery, Cathy Linh Che, Mark O’Connell, Renee Gladman, Dunya Mikhail, Newsha Tavakolian, Sara Baume, Karl Ove Knausgaard, Cia Rinne, and Sally Rooney, to name but a few. As Katie said in an interview with Real Pants, “Actively seeking out and publishing voices from diverse backgrounds is fundamentally important to me as an editor (I’m half Irish and half Iranian, so that’s what I grew up with) and I love seeing how those elements strengthen from issue to issue.”