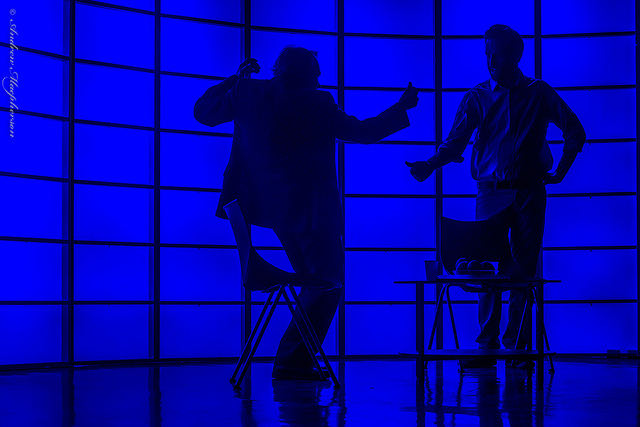 Watch a talented cast of actors bring a novel to life! The Workshop is proud to host an exclusive back-to-back staged reading of Eric Gamalinda‘s The Descartes Highlands, performed by Alexis Camins and Jennifer Betit Yen, Executive Director of the Asian American Film Lab–as well as a new play in progress, Annette Storckman’s Bonesetter: A Tragislasher. Reserve a seat for this special, intimate performance.

Eric Gamalinda’s The Descartes Highlands tells the story of two brothers who grow up on opposite sides of the world but realize they were abandoned at birth by the same draft-dodging father in this “thoughtful, slow-burning character-driven story” that illuminates “a condition that everyone can identify with—the need to define ourselves—by asking whether we do that by learning about our past or forging a path into the unknown future.” (New Pages). A contributor to Harper’s Magazine, Manila Noir, and Language for a New Century, Eric Gamalinda has been awarded the Philippine National Book Award; the Asian American Literary Award; and the Palanca Memorial Award, the highest literary honor in the Philippines. Formerly the Publications Director of the Asian American Writers’ Workshop, he teaches at Columbia University’s Center for the Study of Ethnicity and Race. Read his poetry on The Margins!

In Bonesetter: A Tragislasher, Annette Storckman adapts Thomas Middleton’s The Revenger’s Tragedy and explores the bloody world of Jacobean-era England through the lens of campy 1980s horror movies. Bonesetter tackles the virgin/whore dichotomy, so common in Jacobean plays, head on, and modernizes issues of consent and vengeance in a funny and satirical setting. The play will be performed by five actors from Spicy Witch Productions, an organization dedicated to creating roles for women on and offstage and help close the gender gap in theater.

Eric Gamalinda’s novel will be performed by actors Alexis Camins and Jennifer Betit Yen. Alexis Camins last appeared in Manhattan Theater Club’s production of The World of Extreme Happiness by Frances Ya-Chu Cowhig, as well as Resurrection, written by Eric Gamalinda (Clurman Theater), Japanoir (EST), and Killing the Boss (Cherry Lane). President of the Asian American Film Lab, Jennifer Betit Yin is the CEO of MyJennyBook, a company providing multimedia stories for children, and is currently in production on the film The Opposite of a Fairy Tale, designed to draw light to the issue of elder abuse. As an actor, Betit Yen has appeared in productions at East West Players and Lodestone in Los Angeles and at the Manhattan Theatre Source and Snapple Theatre in New York, as well as on Royal Pains (USA), Reading Rainbow, and America’s Most Wanted (FOX).

$5 Suggested Donation
Open to the public

From Page to Play