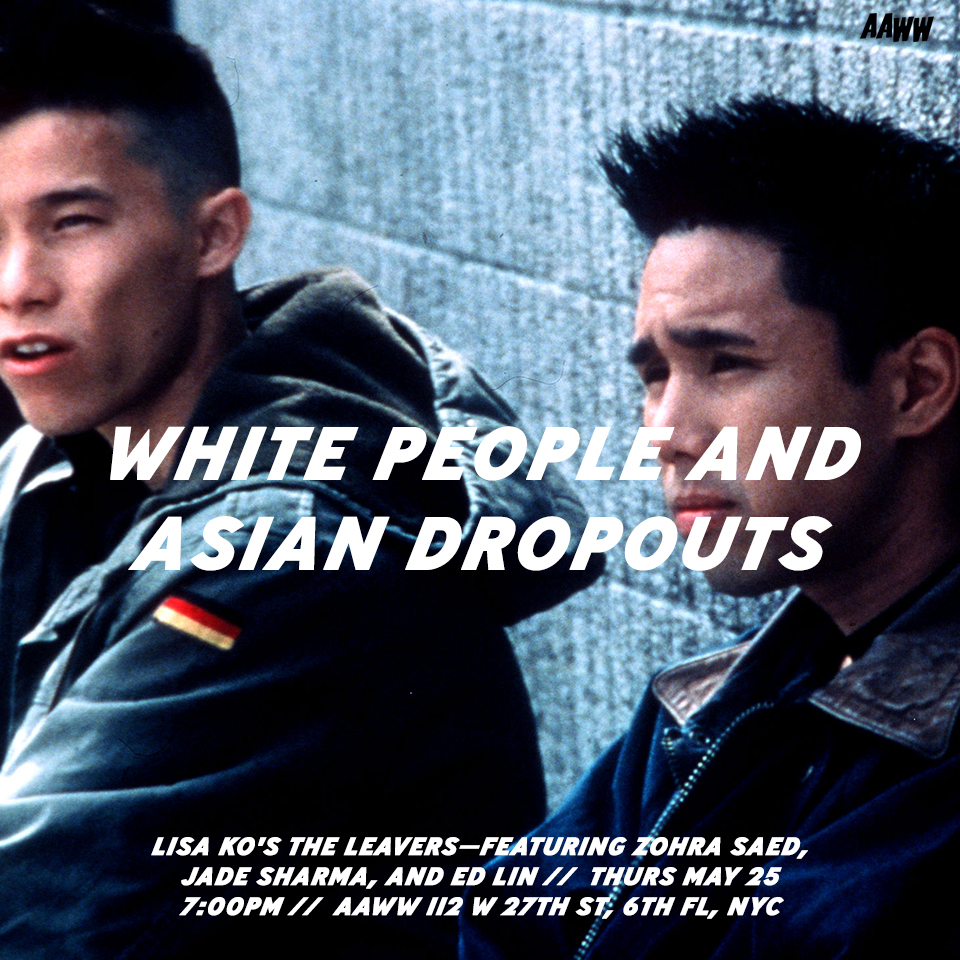 Are you in touch with your inner Asian American rebel or underachiever? Is Jordan Peele’s Get Out your new favorite movie? Come hear Lisa Ko read from her debut novel, The Leavers, the winner of the 2016 PEN/Bellwether Prize for Fiction, awarded by Barbara Kingsolver for a novel that addresses issues of social justice. The book tells the story of an undocumented Chinese immigrant mother and her son, who struggles to find his own identity when he’s adopted by well-meaning white college professors. Novelists Ed Lin and Jade Sharma will share their stories of Asians who don’t fit the model minority stereotype. Then Lisa herself will read and discuss her book with Zohra Saed.

Lisa Ko’s The Leavers (Algonquin Books 2017) starts with the disappearance of Deming Guo’s mother, Polly, an undocumented Chinese immigrant. Eleven-year-old Deming finds himself adopted by a pair of well-meaning white professors and moves from the Bronx to a small town upstate. A heart-wrenching story of assimilation and motherhead, the book is told by Daniel (who grows into a directionless young man) and Polly, Ko’s incredible maternal character. Ms. Magazine writes: “The novel weaves from past to present, from immediate abandonment to chronic loss, showing how the unfathomable disappearance of a mother eats into her son’s effort to “move forward.” … The story soars when Ko writes of immigration detention–a civil detention for violation of a civil law­ that is as callous and brutal as the worst sort of criminal incarceration.” A co-founder of Hyphen and a fiction editor at Drunken Boat, Lisa has been awarded fellowships and residencies from the New York Foundation for the Arts, the Lower Manhattan Cultural Council, the MacDowell Colony, and elsewhere. She is a former AAWW Van Lier Fellow and a past editor of AAWW’s member magazine Ten. Read her in AAWW’s The Margins and talking about AAWW in Pen Ten.

Ed Lin, a native New Yorker of Taiwanese and Chinese descent, is an all-around stand-up kinda guy. He’s the author of several books: Waylaid published by Kaya Press; the Robert Chow crime trilogy, set in 1970s Manhattan Chinatown; and the Taipei mysetery series, Ghost Month and Incensed, both published by Soho Crime. The Chow books will be reissued this fall by Witness Impulse, a tiny print of Penguin. Lin is the first author to win three Asian American Literary Awards. He lives in New York with his wife, actress Cindy Cheung, and son.

Zohra Saed is a co-editor of One Story, Thirty Stories: An Anthology of Contemporary Afghan American Literature (University of Arkansas Press). Mispelled Cities/Falsch geschriebene Stadte: Sahar Muradi and Zohra Saed, a bilingual English/German chapbook, was published for documenta13. She is the co-founder and editor of Brooklyn Upset Press. Watch the video of her conversation with Moustafa Bayoumi at AAWW and read her “Secret Lives of Misspelled Cities” in AAWW’s The Margins.

Jade Sharma is the author of Problems (Emily Books/Coffee House Press). Drawn to troubled characters, her novel was described by The New York Times as a rule-breaking debut with vulgarity that “is deeply and powerfully feminist. Most of Sharma’s best lines are too profane to print; Maya’s narration is crude, unsettling and often shamelessly sexy.” Jade is a writer living in New York with an MFA from the New School, she is living the unromantic unhip dream.

This event is cosponsored by the New York Immigration Coalition (NYIC) and the Asian American Journalists Association (AAJA).