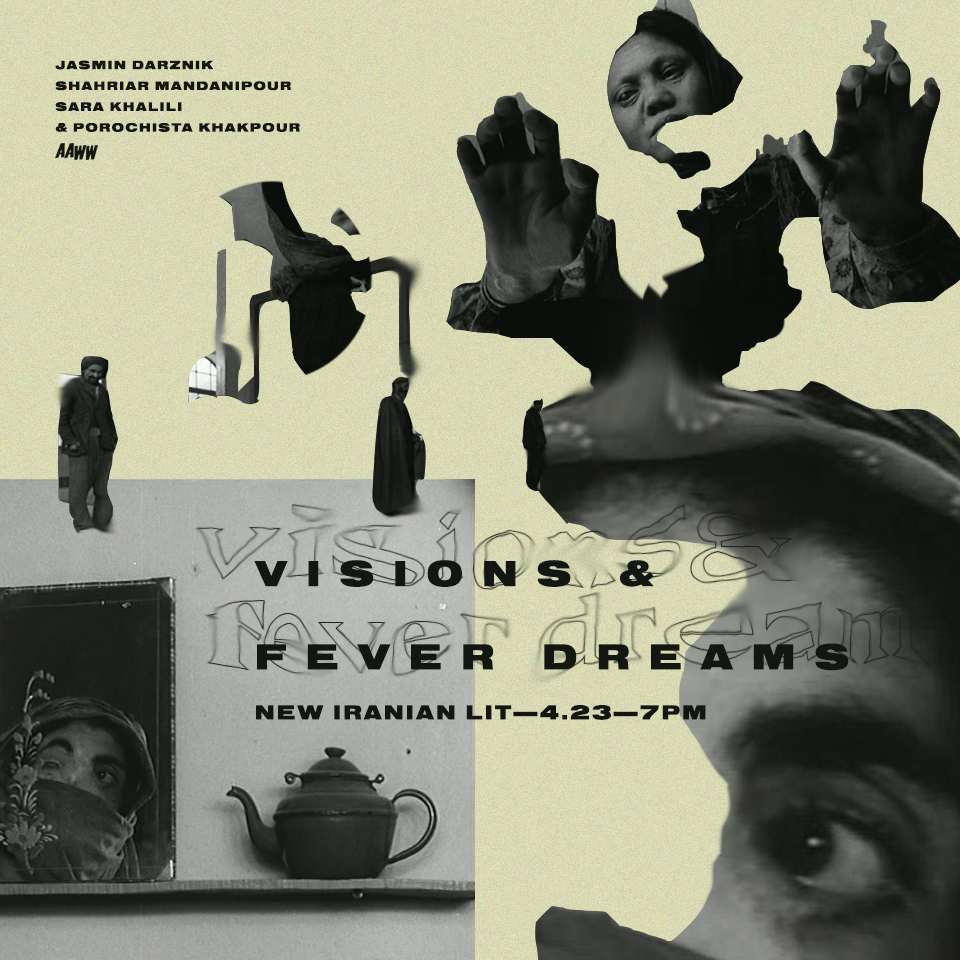 Come for a special reading on folklore, the Iranian revolution, and people whose dreams were lost to history. “One of Iran’s greatest novelists” (Guardian), Shahriar Mandanipour reads from Moon Brow, the story of a playboy-turned-soldier shell shocked from the Iran-Iraq War who sees visions of angels from the past. Jasmin Darznik reads from Song of a Captive Bird, her debut novel about the life of legendary rebel feminist poet Forough Farrokhzad; the novel translates many of her poems into English for the first time. Also featuring Mandanipour’s translator Sara Khalili, and moderated by Porochista Khakpour.

Jasmin Darznik is the author of the New York Times bestseller The Good Daughter: A Memoir of My Mother’s Hidden Life. Her novel Song of a Captive Bird is a fictional account of Iran’s trailblazing woman poet, Forugh Farrokhzad, and will be published by Random House in February 2018. Jasmin was born in Tehran, Iran and came to America when she was five years old. She holds an MFA in fiction from Bennington College and a Ph.D. in English from Princeton University. Now a professor of English and creative writing at California College of the Arts, she lives in the San Francisco Bay Area with her family.

Shahriar Mandanipour is one of Iran’s most accomplished writers, the author of nine volumes of fiction, one nonfiction book, and more than 100 critical essays. Born in 1957 in Shiraz, Iran, he studied political science at Tehran University and bore witness to the 1979 revolution. After the onset of the Iran-Iraq war in 1980, he joined the military and volunteered for duty at the front, where he served for more than eighteen months. His first collection of stories was published in 1989; his works were banned between 1992 and 1997. In 2006, he moved to the United States and has held fellowships at Brown, Harvard, and Boston College. Mandanipour’s first novel to appear in English, Censoring an Iranian Love Story (Knopf, 2009), has been widely acclaimed. He currently teaches creative writing at Tufts University.

Sara Khalili is an editor and translator of contemporary Iranian literature. Her translations include Censoring an Iranian Love Story by Shahriar Mandanipour, The Pomegranate Lady and Her Sons by Goli Taraghi, The Book of Fate by Parinoush Saniee, and Rituals of Restlessness by Yaghoub Yadali. She has also translated several volumes of poetry by Forough Farrokhzad, Simin Behbahani, Siavash Kasraii, and Fereydoon Moshiri. Her short story translations have appeared in The Kenyon Review, The Virginia Quarterly Review, EPOCH, GRANTA, Words Without Borders, The Literary Review, PEN America, Witness, and Consequence.

Porochista Khakpour’s debut novel Sons and Other Flammable Objects (Grove/Atlantic, 2007) was a New York Times “Editor’s Choice,” Chicago Tribune “Fall’s Best,” and 2007 California Book Award winner. Her second novel, The Last Illusion (Bloomsbury, 2014), won a place on a number of “best of” lists, being a Kirkus Best Book of 2014, a Buzzfeed Best Fiction Book of 2014, and an NPR Best Book of 2014. Check out an interview with her in AAWW’s The Margins.