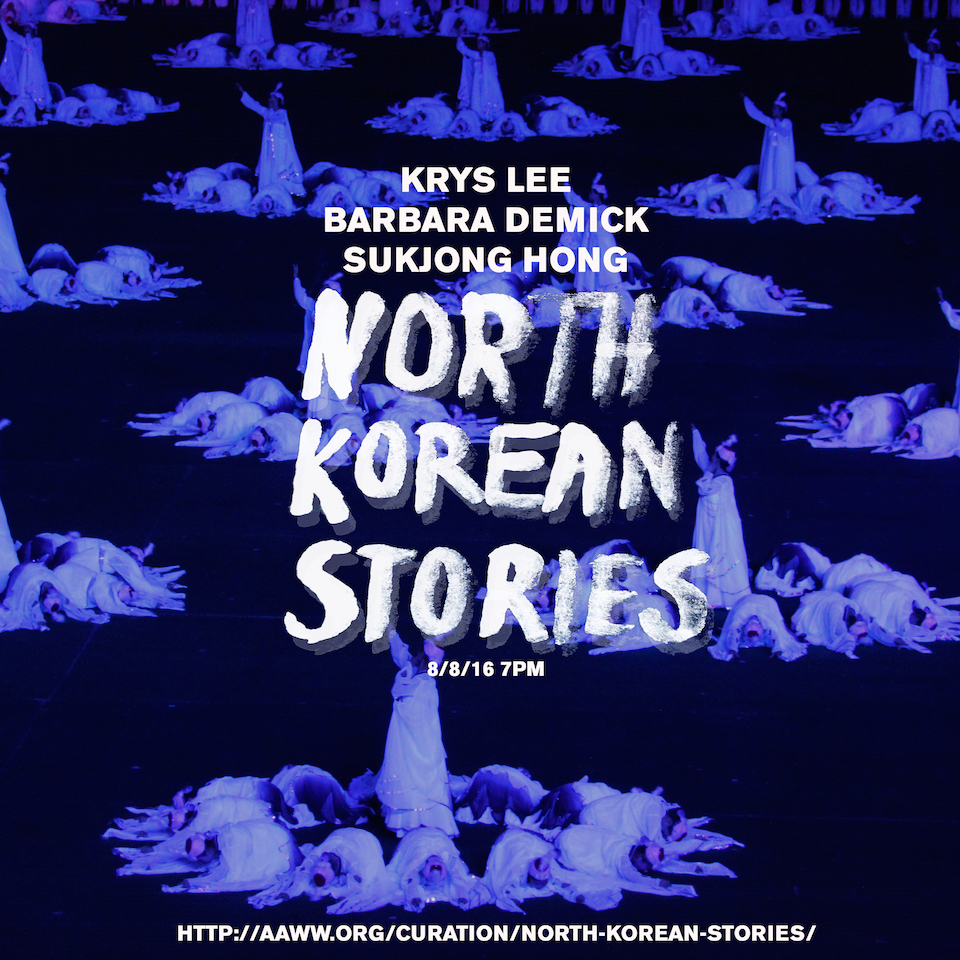 North Korea is often represented as an unknowable space: a militarized space with few computers, no Internet, and a government mouthpiece that reports almost no news. Join us with two award-winning authors who seek to imagine and tell stories from the so-called Hermit Kingdom: Krys Lee, whose new novel is one of the most anticipated books of 2016 (The Millions) and National Book Award-nominated journalist Barbara Demick. The event will be moderated by former AAWW Open City Fellow Sukjong Hong.

In Krys Lee’s new novel How I Became a North Korean (Viking 2016), the three main characters must struggle to survive together when they find themselves in a small Chinese town just across the river from North Korea: Youngju, a student from a prominent North Korean family; Jangmi, a smuggler who’s had to fend for herself since childhood; and Danny, a Chinese American teenager from California. In the words of Adam Johnson, Pulitzer Prize and National Book Award-winning author: “Lee forges a world no other writer could create, one where the only response to longing and loss is learning to trust and hope again.” An assistant professor at Yonsei University, Underwood International College, in South Korea, Krys previously read at AAWW for her short story collection Drifting House. She is a recipient of the Rome Prize and the Story Prize Spotlight Award, the Honor Title in Adult Fiction Literature from the Asian/Pacific American Libraries Association, and a finalist for the BBC International Story Prize.

Barbara Demick is the author of Nothing to Envy: Ordinary Lives in North Korea (Spiegel & Grau/Random House 2009), a finalist for the National Book Award and the National Book Critics Circle and winner of the Samuel Johnson Prize. To research the book, Demick interviewed about a hundred defectors and honed in on the lives of six North Korean citizens in Chongjin. The book spans a fifteen year period that saw the death of Kim Il-sung, the rise to power of his son Kim Jong-il, and a devastating famine that killed one-fifth of the population. As the Telegraph writes, “the stories it recounts are moving and disturbing, and it surely tells us far more about real North Korean lives than a fleeting tourist visit to the Stalinist-kitsch theme park that is Pyongyang.” The former Beijing bureau chief of the Los Angeles Times, she is also the author of Logavina Street: Life and Death in a Sarajevo Neighborhood (Andrews & McMeel, 1996).

Sukjong Hong is a researcher and reporter for The New Republic. She was a 2014 commissioned artist with the Laundromat Project, a 2014 Guardian Diversity Writers Workshop participant, and a 2012-2013 Open City Magazine creative non-fiction fellow at the Asian American Writers’ Workshop. Her writing has appeared or is forthcoming in Gothamist, Triple Canopy Magazine, and Racialicious. Read her talking about Gangnam Style and income inequality in Open City–and read her other Open City pieces here.

Co-sponsored by the Center for Korean Research (CKR) and the East Asian Languages and Culture Department (EALAC) of Columbia.