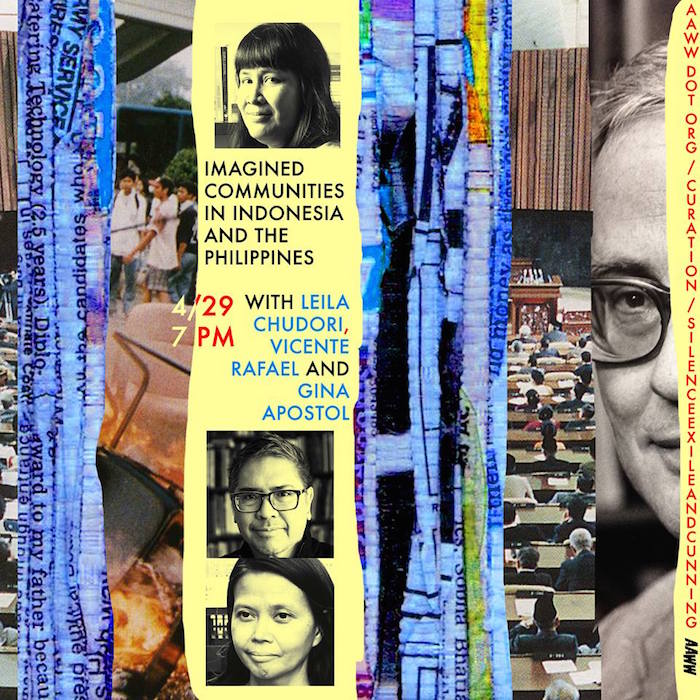 Join us for a special night about nationhood, exile, and Southeast Asian history featuring seminal Indonesian novelist Leila Chudori and honoring the late Benedict Anderson. The Jakarta-based Chudori will read from her novel Home, which spans the generation of left dissidents forced into exile by the 1965 killings and Suharto’s New Order; the book was winner of the country’s highest literary prize. Also intimately involved in this phase of Indonesian politics was the great theorist of nationalism, Benedict Anderson, who helped debunk Suharto’s account of 1965 as a graduate student, causing him to be banned from the country until 1998–as he describes in his posthumously published new book A Life Beyond Boundaries: A Memoir (Verso 2016). Once stating that the only nationalist he would consider himself to be was an Indonesian one, Anderson recently passed away in Jakarta. Historian of Philippines colonialism–a former student of Anderson’s–will read from Anderson’s memoir and offer recollections of his former teacher. Chudori and Rafael will discuss exile, nation, and the history of Indonesia and the Philippines with novelist Gina Apostol, a correspondent with Anderson.

In 1965, as many as a million Indonesians were killed by the right-wing Suharto government. Leila Chudori worked for the magazine Tempo, which was banned under Suharto’s New Order in 1994. “For me, who grew up and became an adult during the New Order period, I was conscious of a historical and political absurdity,” Chudori writes in The Margins. “I began to feel that there were some Indonesians who had become invisible.” Based on over six years of research, her novel Pulang or Home (Deep Vellum Books 2015), tells the story of two generations shaped by the events of 1965. Chudori’s novel covers a generation of Indonesian leftists who longed for Indonesia from Paris and created new homes (and a restaurant!) there. “Home is not simply a story about ideology or political power,” writes translator John McGlynn. “The novel is about the lives of Indonesian exiles, their families and friends, including those left behind in Indonesia. This story is one of love, lust, and betrayal but one that also includes laughter, adventure and lots of food.” You can read an excerpt in The Margins.

A Guggenheim Fellow, Vicente Rafael is a professor at the University of Washington whose work focuses on language and power, the politics of translation, comparative colonialism and nationalism, often with a focus on colonial and post-colonial Philippines and the United States. His books include Motherless Tongues: The Insurgency of Language Amid Wars of Translation (Duke University Press 2016) and White Love and Other Events in Filipino History (Duke University Press 2000).

Chudori will appear in conversation with Gina Apostol, whose novel Gun Dealers’ Daughter (W.W. Norton 2013) won the 2013 Pen Open Book Award. Read an excerpt of the novel in The Margins. Born in Manila, Gina is the author also of Bibliolepsy, which won the 1998 Philippine National Book Award for Fiction, and The Revolution According to Raymundo Mata, a comic historical novel-in-footnotes about the Philippine war for independence against Spain and America in 1896.

Co-sponsored by the Lontar Foundation, NY Southeast Asian Network, and Words Without Borders.

Imagined Communities in Indonesia and the Philippines